What the "Mir" TV network keeps silent about, how the Belarusian army saved Kazakhstan, and why this all is the Americans’ fault?

14 January 2022
Fake news of the week: What the "Mir" TV network keeps silent about, how the Belarusian army saved Kazakhstan, and why this all is the Americans’ fault?

The protests in Kazakhstan began on January 2. But the Mir TV channel, created specifically to cover the news of the CIS countries, kept ignoring the turmoil during the first days of rioting

Subjects
The protests in Kazakhstan began on January 2. But the Mir TV channel, created specifically to cover the news of the CIS countries, kept ignoring the turmoil during the first days of rioting.

According to the TV company's website, “Mir” has two branches in Kazakhstan: in the capital, Nur-Sultan (or formerly Astana) and in Almaty, the country's largest city, where the protest movement has been active. However, on 4 January - the third day of protests in Kazakhstan, when protesters were already marching through the centre of Almaty - the only one short piece covering Kazakhstan on “Mir” TV was about the new COVID-19 restrictions that have been introduced in the country.

"New restrictions are being introduced in Kazakhstan due to the rapid spread of the covid variant Omicron. Unvaccinated citizens will be barred from entering public gathering places: banks, post offices, fitness centres," correspondent Kiril Kharlamav said in a news broadcast.

This news broadcast on the Mir TV channel aired on 4 January at 7 p.m. Here is what else was happening on that day in Almaty, where the author of this piece was broadcasting from, as well as in other Kazakhstan cities. 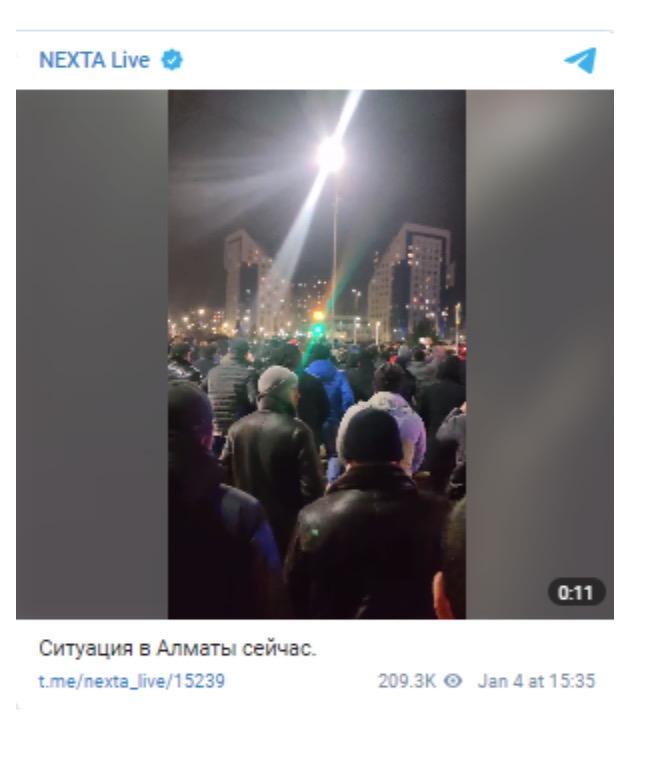 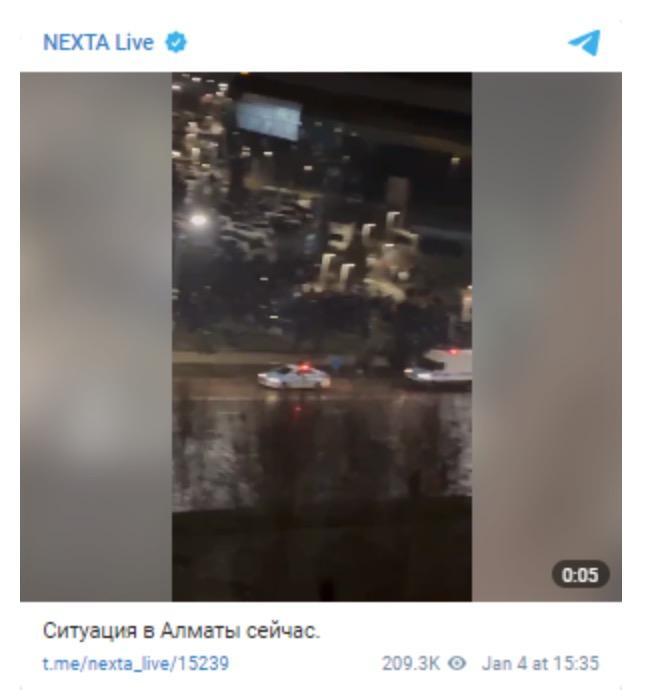 Nevertheless, the journalists decided not to tell their viewers about what was happening there. But they did tell how goats in Germany lined up in the shape of a giant syringe to defeat the coronavirus pandemic. 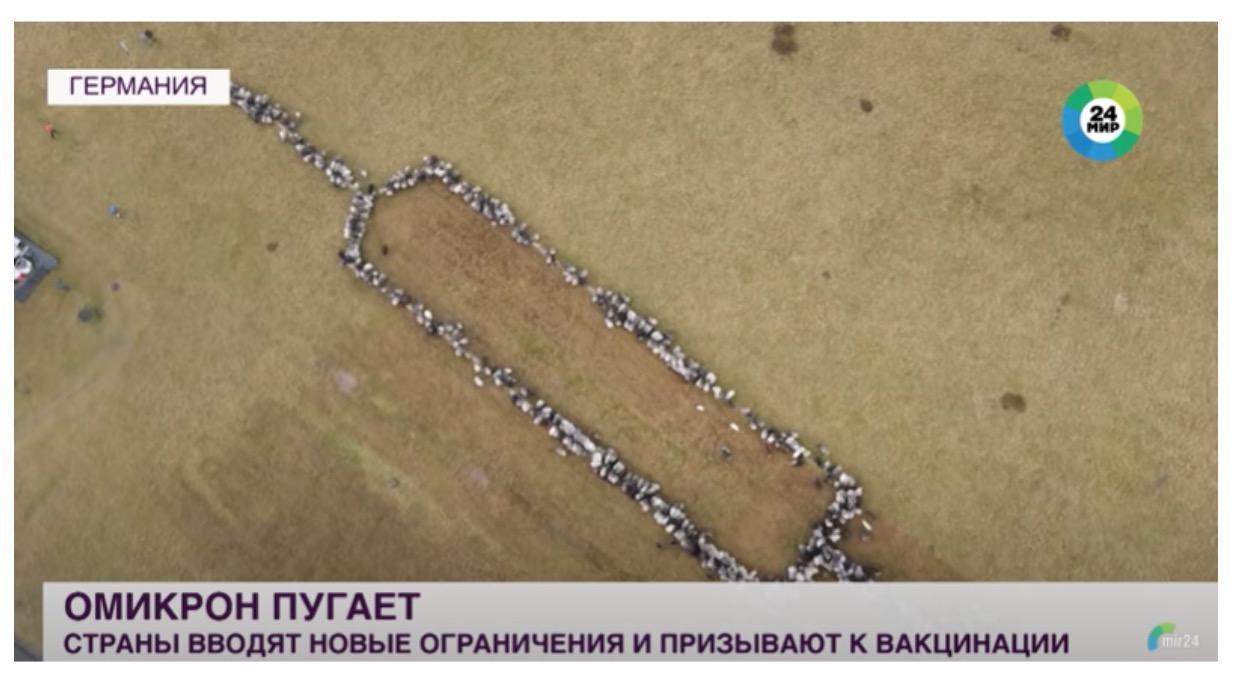 "To assemble the pattern, 700 animals were trained to stand evenly in a line for several days. This was helped by the breadcrumbs scattered around the outline of the pattern," the lead story of the news broadcast reads.

They did not start talking about the protests in Kazakhstan until the 4th day, 5 January, when the Mir TV and radio company’s office in Almaty was seized by protesters.

"The office of Mir TV channel in Almaty was vandalised. All the equipment was destroyed, but thanks to the active help of the akimat, all staff of the network are evacuated. This material was handed over to Kiril Kharlamav a few minutes before the protesters broke into the office," the broadcaster said. 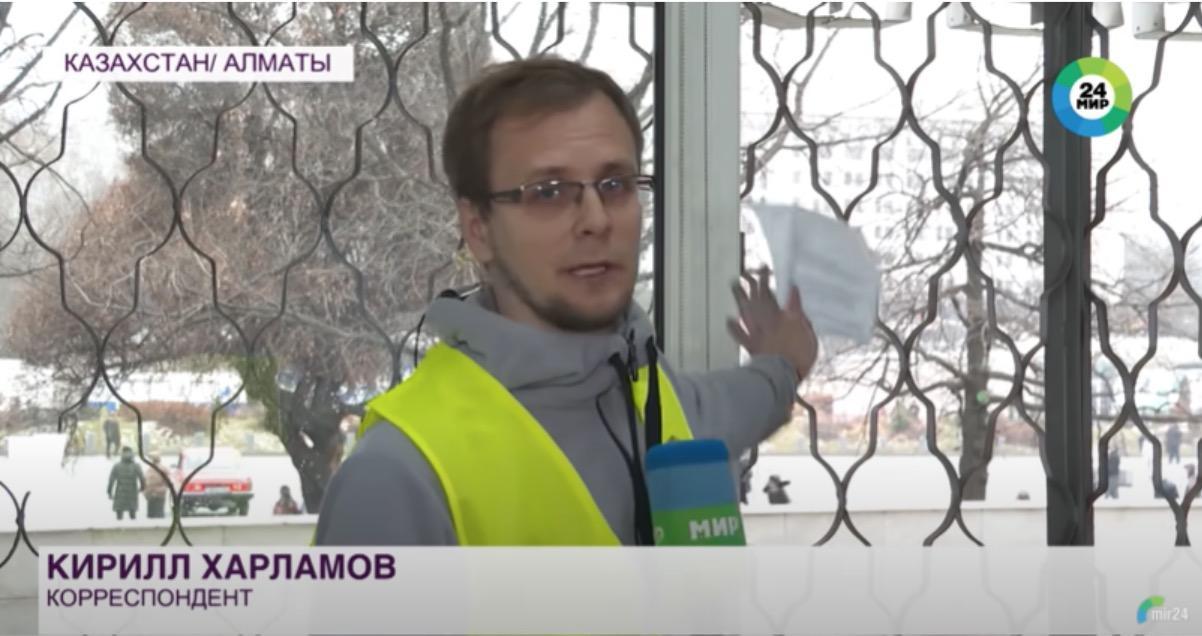 Belarusian pro-regime philosopher and sociologist Mikalay Shchokin spoke about the mobility of the Belarusian army, which, thanks to its commander-in-chief Alyaksandar Lukashenka, quickly made it to Kazakhstan.

"I want to highlight another very important thing. Many people have criticised Alyaksandar Lukashenka for financing our army a lot. Have any of you wondered how within five hours special units of 500 people and five IL-76s were prepared. And this includes preparations of equipment and uniforms, this is the entire infrastructure. We loaded up and in 4-5 hours were already in Kazakhstan. Tell me, is there a single army in Europe that can afford to follow the commander-in-chief's instructions in such a mobile and clear manner?", – Shchokin said.

The flight from Minsk to Almaty indeed takes about five hours. But the military was delivered there by five military transport aircraft IL-76 of the Air Force of the Russian Federation, not Belarus. Even Defense Minister Viktar Khrenin does not hide the fact that the planes are Russian.

"Tonight this unit made a march to the Machulishchi airfield area, where it was loaded onto planes of the Russian Federation. At the moment they are moving to the location," Khrenin said.

Shchokin gave the credit of the army's mobility to Belarus, although he forgot to mention that it was not Belarusian, but Russian planes that brought it there.

The pro-regime political analyst Piotr Piatrowsky said that the reforms in Kazakhstan have led to "social insecurity of people". He cites as an example the poor labour legislation: unlike Belarusians, workers there are completely unprotected. Here are Piatrowsky's arguments:

"How protected we are, that we have 3 years of maternity leave; if you are sent to serve in the army, they have no right to fire you. All this does not exist in Kazakhstan".

This is not true. We looked into the Labour Code of Kazakhstan, which says the opposite.

And according to Article 100 of the Labour Code of Kazakhstan, the employer is obliged to give an unpaid maternal or paternal leave until a child reaches the age of three. During this time, the employee retains his or her work place. The only difference from Belarus is that the child benefit is paid for only 1 year, but not 3, as we have.

Piatrowsky also summarised that Kazakhstan is among the top-10 countries with the worst workers' rights.

Two years ago, according to the International Trade Union Confederation, this was indeed the case. But in the 2021 ranking of the same organisation, Kazakhstan was no longer on the list of top-10. Belarus, on the other hand, has recently appeared there. 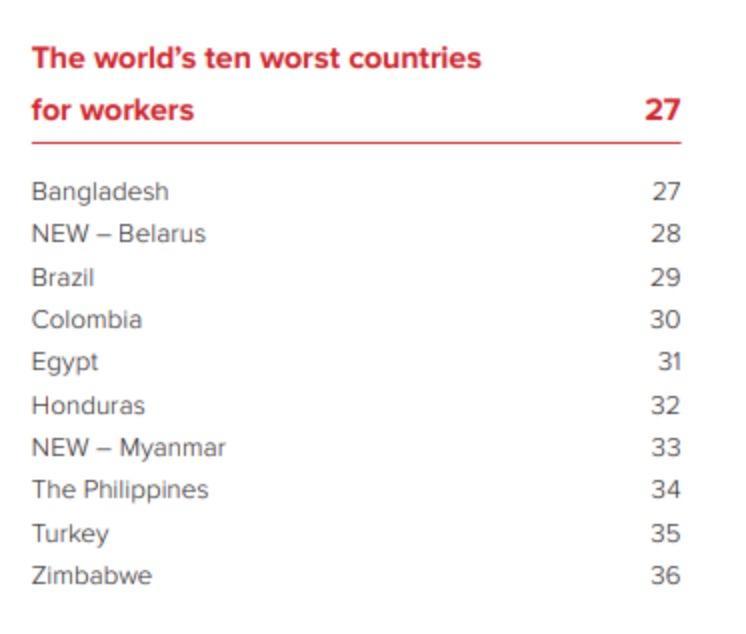 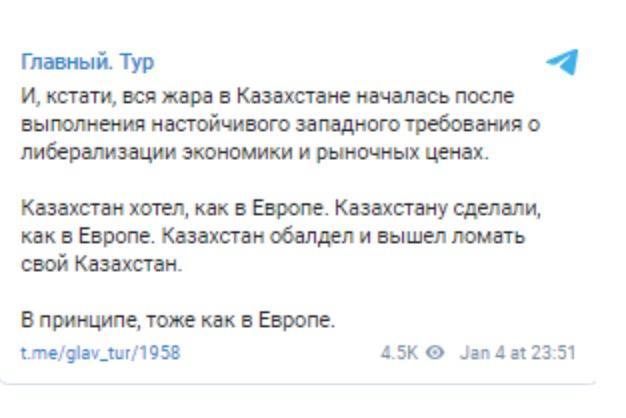 However, it was the Eurasian Economic Union which demanded higher gas prices in Kazakhstan.

In 2016, Armenia, Belarus, Kazakhstan, Kyrgyzstan and Russia agreed to form a single market for gas, oil and petroleum products of the Eurasian Economic Union countries. The deadline is 2025. By that time, all EurAsEC member countries should proceed with equal gas prices and form a stock exchange space. 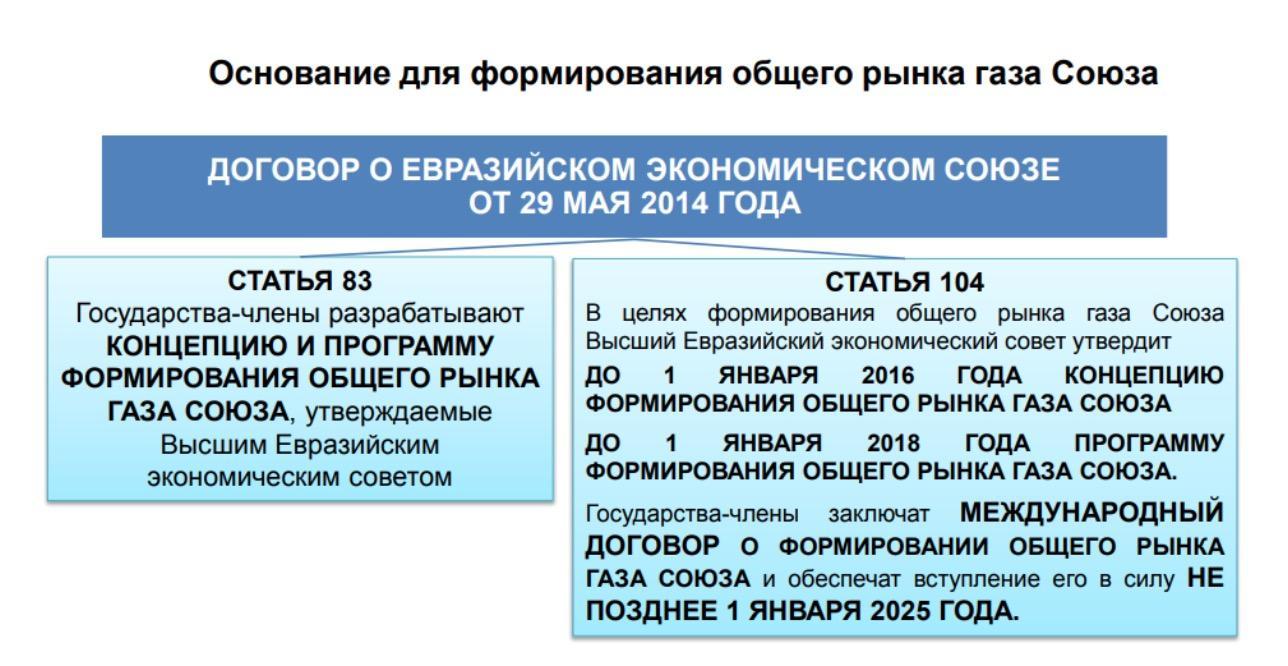 The Kazakhstan Government also said that according to this agreement, gas prices will rise. Here is a quote from the Minister of Energy, dated back to 2019:

"We have previously signed an agreement on joining the single market. Such countries as Russia, Kyrgyzstan, Armenia, and Belarus will enter this market. But it will happen in 2025...Therefore, the issue of price equalisation should be properly understood, it will be done gradually. It is important to understand that it is not a matter of one day, one month or even one year."

The decision "On the formation of a common gas market of the countries of the Eurasian Economic Union" states that commodity exchanges for gas trade should be established on the Union’s territory by January 1, 2022.

This is exactly what happened in Kazakhstan: since January 1, they fully transferred to trading through commodity exchanges. According to the Minister of Energy, the full transition to the gas sale from electronic trading led to an increase in its price from 60 to 120 tenge. And also to the protests. But for some reason Igor Tur kept silent about the Eurasian trace of the Kazakhstan protests.

Rygor Azaronak in his "Secret Springs of Politics" hesitated to fully translate from Kazakh the shouting of Kazakh protesters to Nazarbaev.

"Shal, ket - in our words, go away. In all protest chats," Azaronak said. 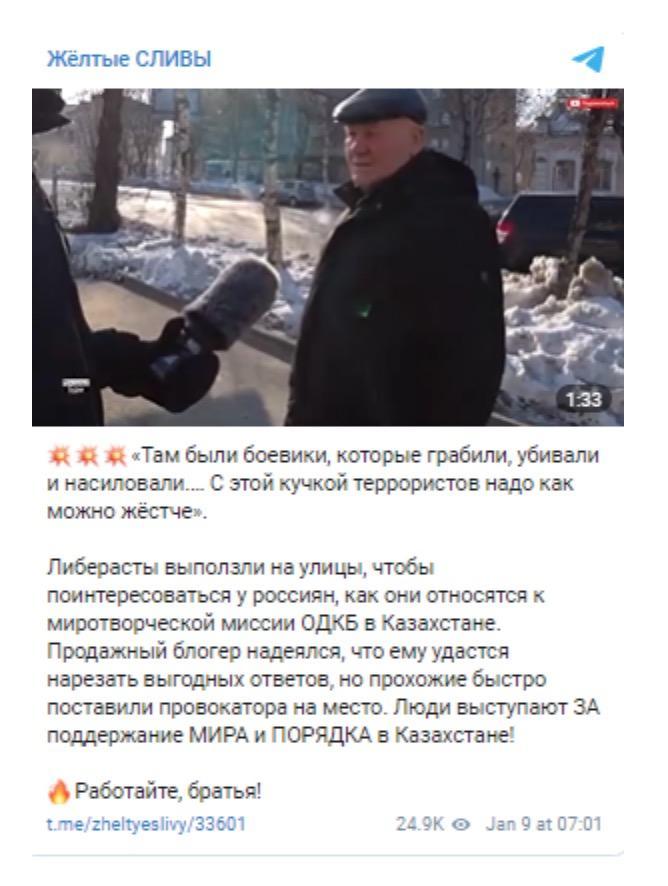 The word "shal", the translation of which Rygor Azaronak did not mention, in Kazakh means “an old man”. It refers to Nursultan Nazarbaev, who turned 81.