Eismant claims that Germany is run by grandchildren of SS officers

29 April 2022
Fake news of the week: Eismant claims that Germany is run by grandchildren of SS officers

One of the Belarusian and Russian propagandists’ favourite things to do nowadays is to look for the SS officers’ namesakes among the current German and EU leadership. Here's what the head of Belteleradiocompany Ivan Eismant said about it

Subjects
One of the Belarusian and Russian propagandists’ favourite things to do nowadays is to look for the SS officers’ namesakes among the current German and EU leadership. Here's what the head of Belteleradiocompany Ivan Eismant said about it:

"There has been a lot of information floating around the internet lately that many of today's German leaders and ministers are direct heirs of rather brutal, violent Nazis who worked in the SS and killed people on the territory of Belarus”.

And here is that information from the ONT telegram channel: 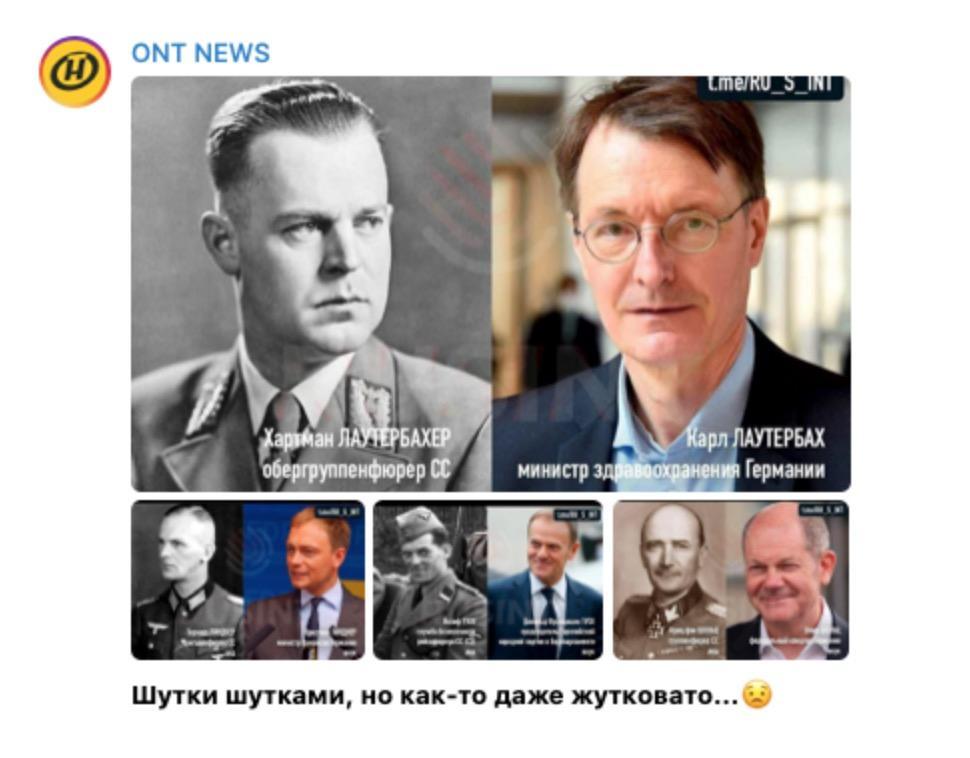 Russian director Nikita Mikhalkov in his programmes even presents it as a proven factl:

"Look, the current German Chancellor Olaf Scholz turns out to be the grandson of Lieutenant General and SS Gruppenführer Fritz von Scholz, who fought with the Russians in both world wars and personally participated in the executions of Jews in Poland and Ukraine. No wonder Mr Scholz smiles when he hears the word genocide taking place in Donbass".

And now let’s figure out who is whose grandson. The German Press Agency has looked at the documents from the Federal Archives and claims that there is no evidence that SS Fritz von Scholz had any children at all. It means no grandchildren either. He died in 1944 near Narva.

German Chancellor Olaf Scholz, on the other hand, had grandparents who were railway workers from Hamburg.

Christian Lindner’s, the German finance minister, grandparents ran a bakery in North Rhine-Westphalia. This information is confirmed by the archives. And SS general Gerhard Lindner, according to the same archives, died in 1982 in Aurich, Lower Saxony.

But the grandfather of Poland's former prime minister, Donald Tusk, did indeed fight in the Wehrmacht, however involuntarily. This fact was uncovered by Polish journalists back in 2005, when Tusk was running for the Polish presidency. A couple of years later, a distant relative of the Tusk family put his grandfather's documents up for auction. Among them were documents confirming that Jozef Tusk was sent to a concentration camp after the war began. And then he was drafted into the Wehrmacht. However, it is not clear how long he served there. TVN TV channel says that, according to the documents, he served for 3 years. According to Polish archives, he was drafted into the reserve regiment only at the end of the war, in August 1944.