The journalists of “Davaite Razbiratsia” programme found out how Tiateryn started his business, how much he managed to make and why Lukashenka’s patronage isn’t necessarily the guarantee of success

Subjects
In the last 10 years Lukashenka’s personal tennis coach Siarhei Tiateryn has just done almost everything. From alcohol and tractors supply to re-export of flowers and transport disinfection, he also had a cinema-bar chain and media business. The leading role was played by his tight relationships with the Belarus autocratic leader. The journalists of “Davaite Razbiratsia” programme found out how Tiateryn started his business, how much he managed to make and why Lukashenka’s patronage isn’t necessarily the guarantee of success.

In soviet times Siarhei Tiateryn succeeded in junior tennis. He was a multiple winner of championships of Belarus, USSR and a European champion. At the dawn of Belarus independence he became the Belarus men’s team captain for the Davis Cup.

It is believed that none other than Tiateryn raised interest in tennis in Lukashenka in the nineties. Right after he became Lukashenka’s personal coach, the sportsman easily climbed the career ladder. In 1997 he became the first Deputy Minister for Sports and Tourism. Between 1999 and 2011 he was Assistant to the President for Physical Education, Sports and Tourism development Affairs. Later he worked for the Belarus Tennis Association, then ran the sports complex in Raubichi, then was the head of the Palace of Tennis. 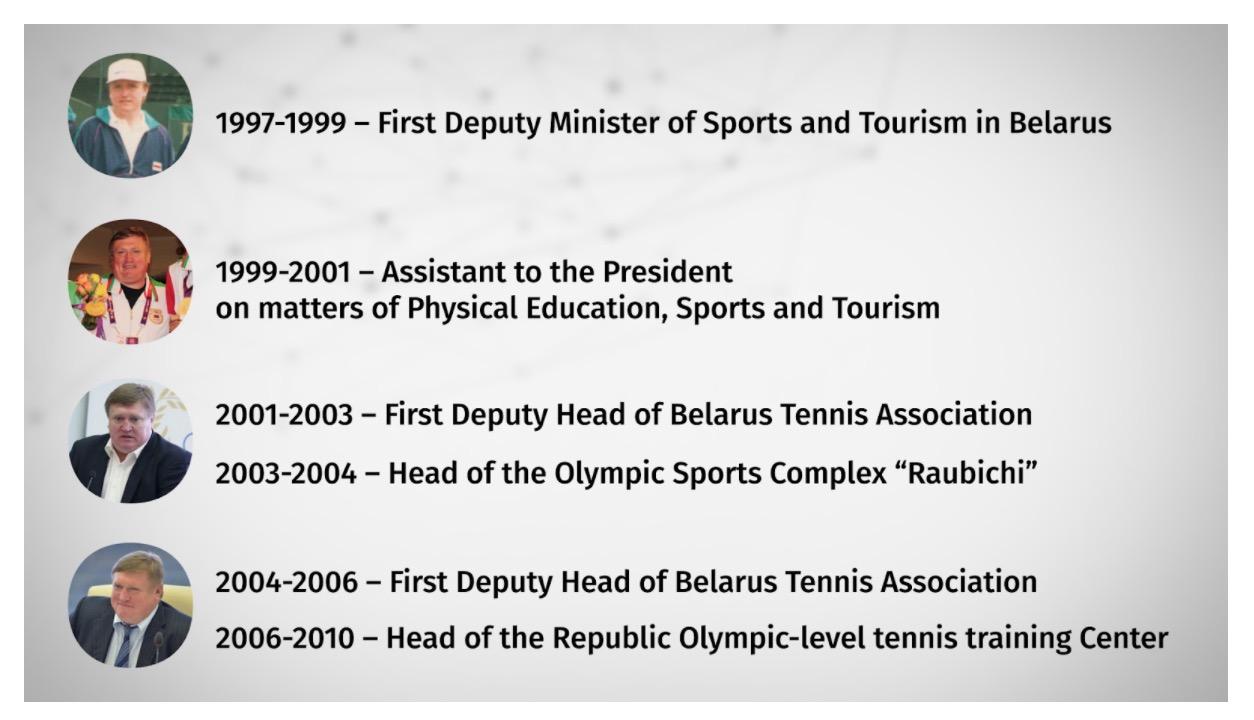 In 2012 Siarhei Tiateryn, Ihar Zaichkav and Aleh Kachan were dismissed from their  positions of the Vice President of National Olympic Committee, Assistant for Sports and the Minister for Sports and Tourism respectively by Lukashenka. This was Lukashenka’s reaction to Belarus' failure performance during the Olympic Games in London. Moreover, Kachan, who worked as a Minister for 3 years, allegedly was facing criminal liability for building toilet facilities at his dacha at the cost of budgetary funds. However, a year later all three mentioned above came out in Tiateryn’s business.

In 2012 he made about $20.000. Previously, having had $18.5 annually in the National Olympic Committee, he had his house built in Drozdy in just 2 years, which approximately cost more than $350.000. It’s not clear, however, how much exactly he needed to start his new business, but connections might have come in handy. 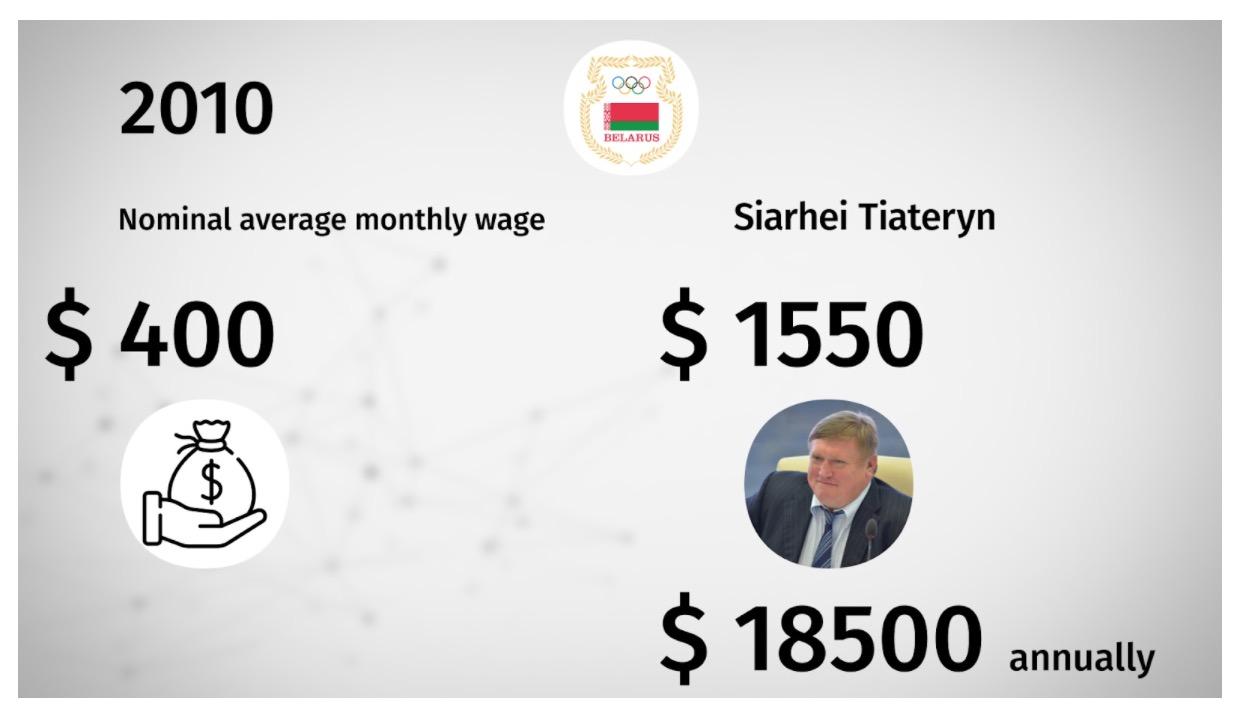 According to the documents leaked by Cyber Partisans, Siarhei Tiateryn, as a rule, acted in the following way - he wrote to Lukashenka to get his approval. The scheme worked because in the early 2010s they spent a lot of time together in informal settings. They were seen together collecting watermelons, cutting the grass and visiting beauty contests. 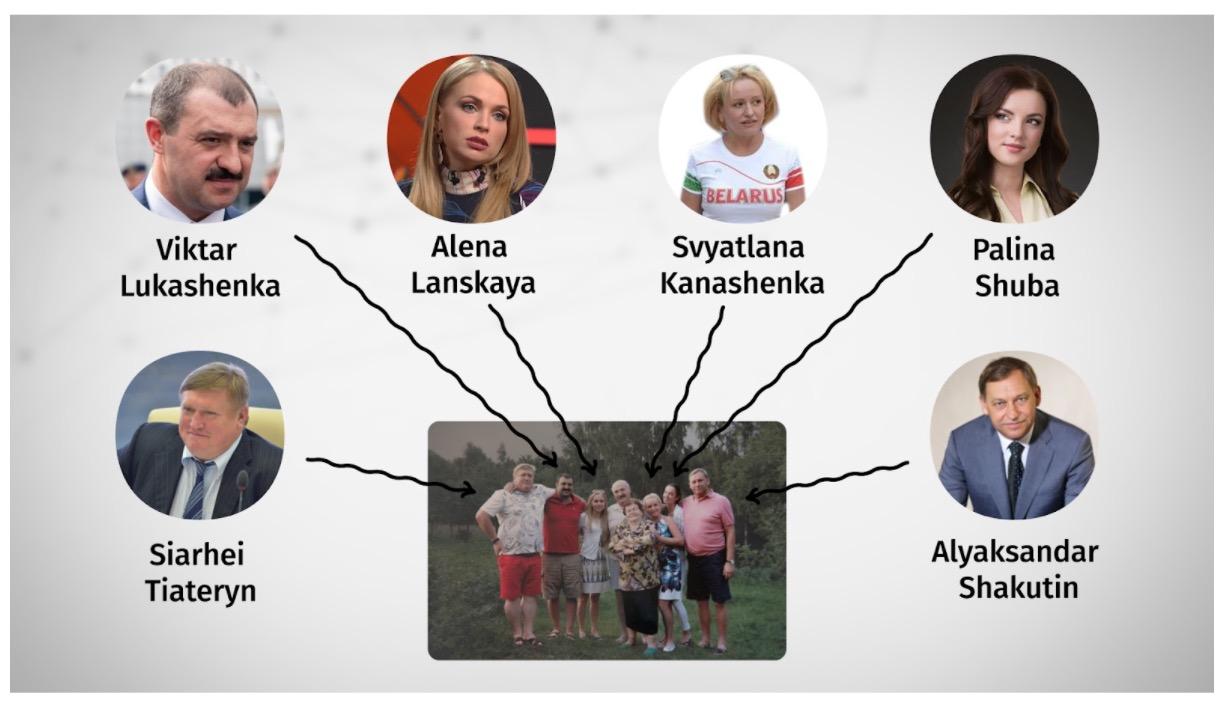 Tiateryn started with supplying imported food to a supermarket chain “Belkoopsoyuz”. In February 2012 Lukashenka severely criticised government operator’s work and ordered the establishment of bulk purchasing of critical imports in order to start competing with other distribution networks. 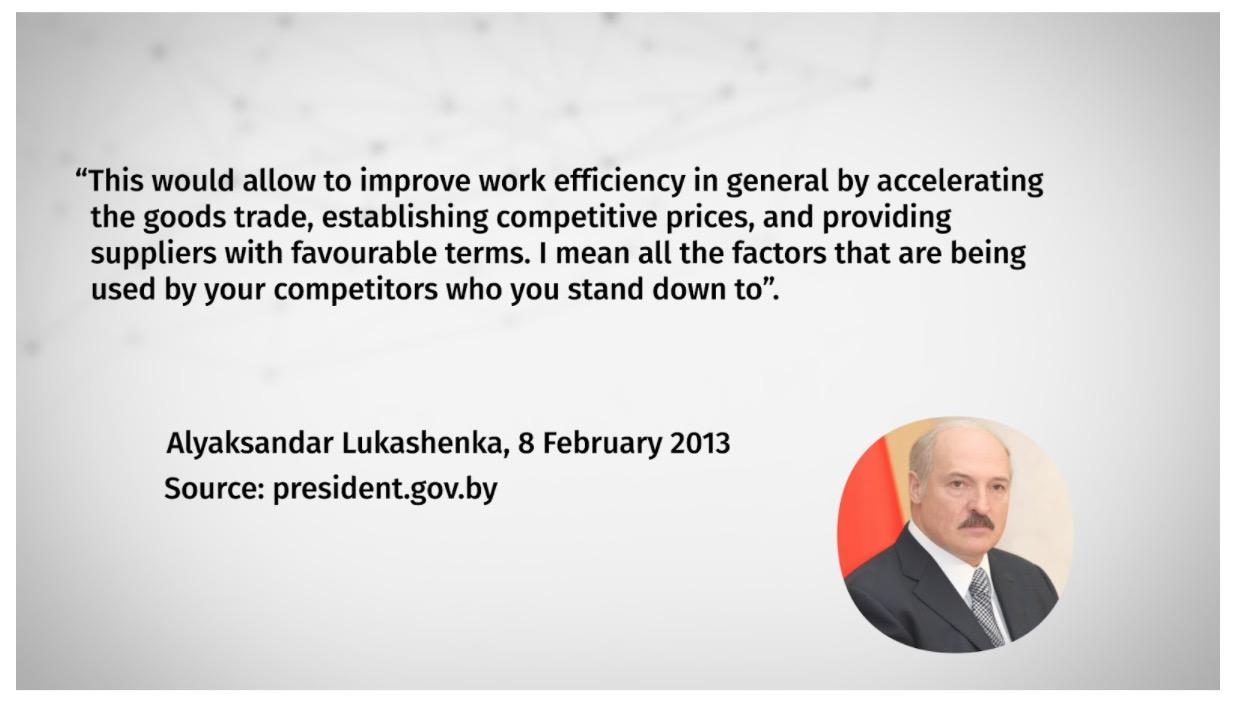 It was obvious that Tiateryn’s companies “BelGlobalStart” and “BelGlobalGarant” acted as mediators in supplying “Belkoopsoyuz” with tea, coffee, confectionery, grocery, fruits and frozen fish. 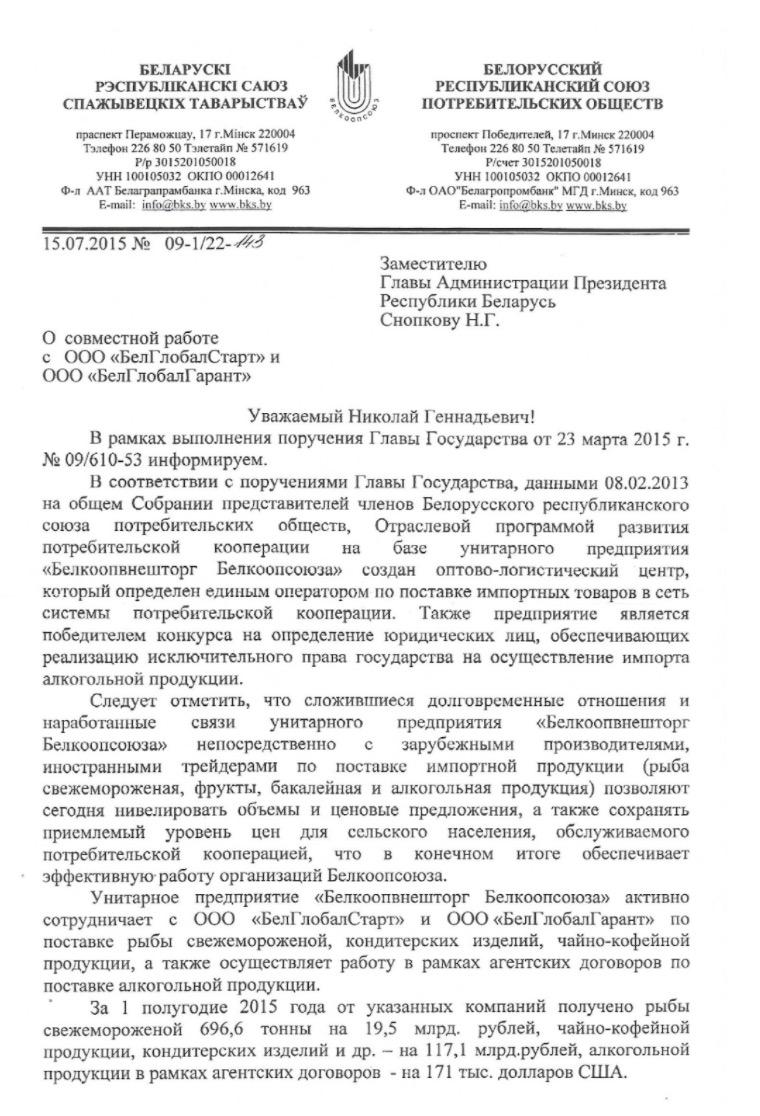 But in 2015 Tiateryn complaint to Lukashenka about “Belkoopsoyuz”. The substance of his letter was, roughly speaking, that his production was not being sold in all rural stores and the operator never paid for tea and coffee on time.

It must be said that Tiateryn didn’t have a good press in “Belkoopsoyuz”. And that is quite understandable. In 2016 “Belkoopsoyuz” was made to order furs processing from Tiateryn’s company “BelGlobalService” in Maladzyechna. Three years after The State Control Committee incriminated Lukashenka’s personal coach in overpricing fur processing services. 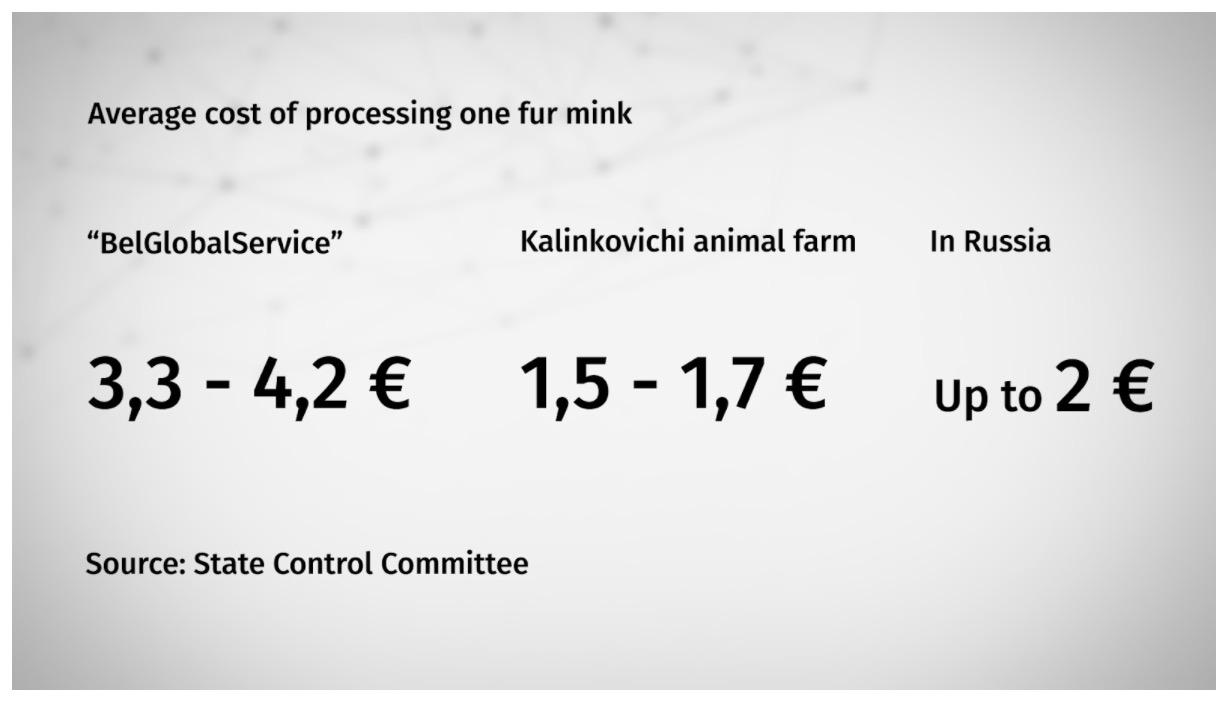 “Thus, the enterprise at the expense of “forced” fur processing in LLC “BelGlobalService”  from 2016 to 2018 lost an estimated €350.000 in potential income” says the letter from The State Control Committee in Grodno region dated 16 January 2019. 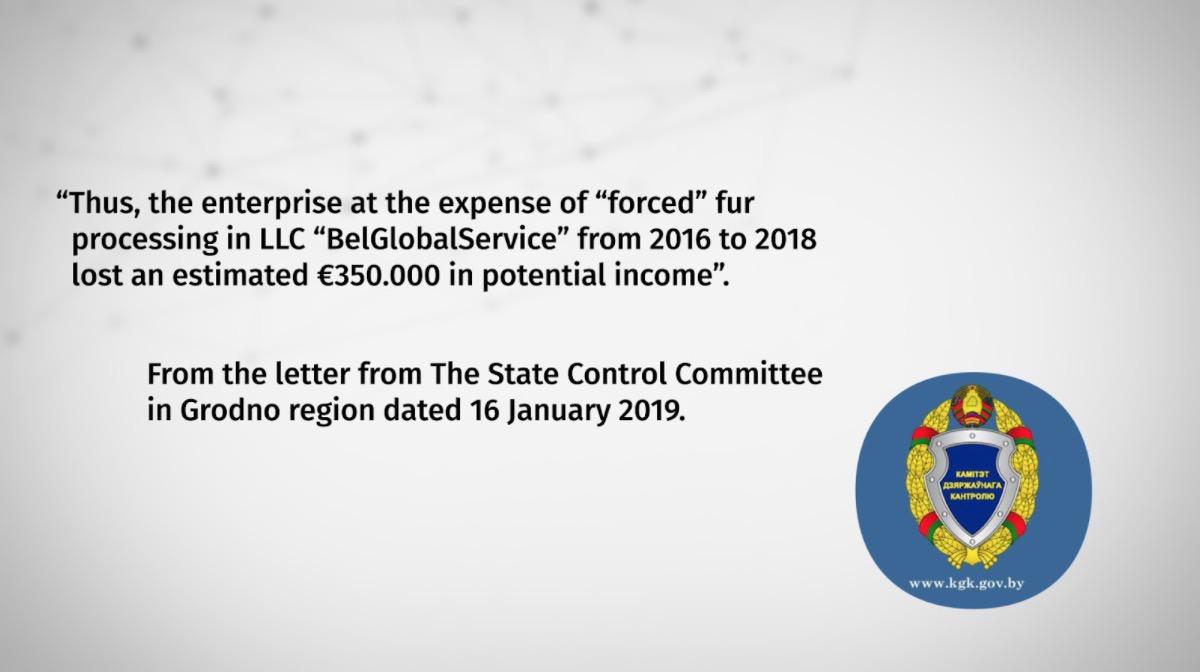 Tiateryn closed the business, which was incriminated in making extra profit from the state budget. However, by that time he had already managed to expand his influence in the market. He opened bars in the capital cinemas, became a special alcohol importer and started supplying it to different retail chains around the country. 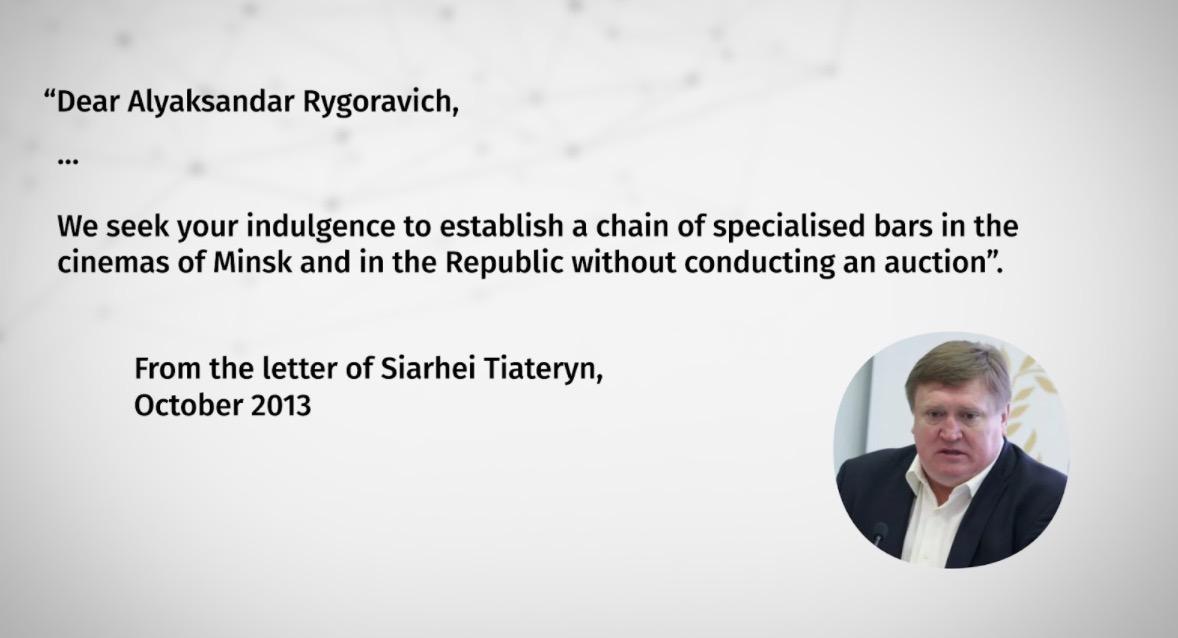 But the business didn't work out. In yet another letter to Lukashenka in 2017 Tiateryn complained that unscrupulous competitors and plant management interrupted his work: “... ill-conceived plant policy has resulted in price wars in Pakistan, caused mistrust among dealers, customers, legal proceedings have started, and, finally, the image of JSC “MTZ” in Pakistan has been undermined”. 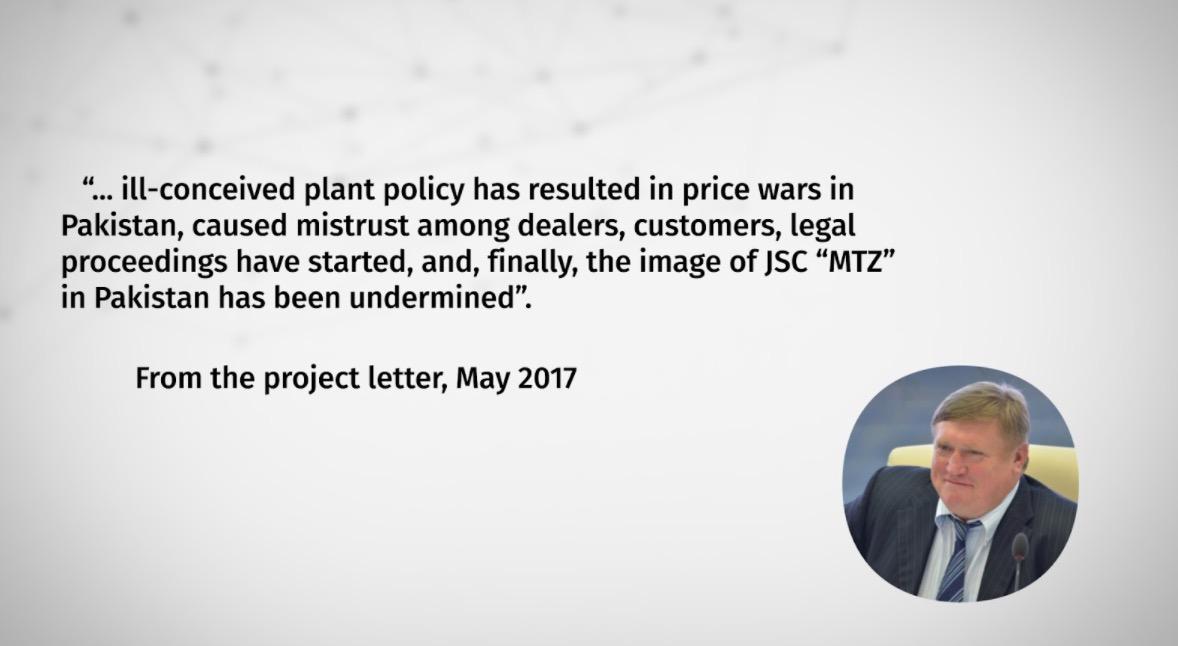 Despite the difficulties, Tiateryn didn’t get down, but created new businesses. In 2018 his company got the right not to pay import VAT in Belarus while supplying the goods to other countries. This way “BelGlobalGarant” turned out to be involved in the grey schemes of re-exporting flowers, fruits and vegetables and also illegal supplies of cheese products to Russia mentioned earlier. His involvement was confirmed by the documents leaked by Cyber Partisans and reports prepared by veterinary control of Russia.

In fact, Tiateryn was in trouble with the law in Belarus too. On March 16 2020 the businessman wrote to the Chairman of the Customs Committee to tell that only an affiliate of “BelGlobalGarant” was operating in accordance with the decree on import VAT exemption issued by Lukashenka, while their head office was importing the goods for sale on the belarusian market but not for export, therefore, the company had all the rights to use the benefit. The controlling organs were not happy with the explanation so they requested the company to respect the law. Tiateryn asked the heads of the Customs Committee to assist “BelGlobalGarant” in importing the goods to Belarus with a zero per cent rate of VAT and no re-export obligation.

In Minsk Tiateryn lobbied for a huge developer project of building a business- administrative centre across from the Palace of Independence. First the city authorities refused him as the requested territory is in the red line zone and the project itself goes against building norms.  Then Tiateryn decided to go the same old way and wrote to Alyaksandar Lukashenka to say that for the future of tennis in Belarus there is a need to expand infrastructure around the Palace of Tennis and build a multifunctional complex. There he was planning to place the head office of “Belagroprombank”, hotel, canteen, swimming pool, gym and leave space for the Tennis Federation needs. The project was supposed to be funded by Tiateryn himself and the bank. Once the letter was received, the project started. The Minsk Executive Committee passed to Tiateryn two rental pieces of land worth 16 mln rubles. However, Tiateryn would pay only 700.000 rubles for land preparation plus 175.000 rubles of annual rent.

From July 1 to October 1 2021 “BelGlobalGarant” was taking part in an experiment: it was disinfecting the vehicles following through the border crossing with Ukraine  “Novaya Guta”. The service was to be paid. It might happen that the service will take place at all international border crossings.

What was Tiateryn’s revenue? It is hard to collect information about all of his companies. However, for instance in 2020 “BelGlobalGarant” and “BelGlobalStart” made more than $80 mln, whereas their net profit accounted for over $2.5 mln. 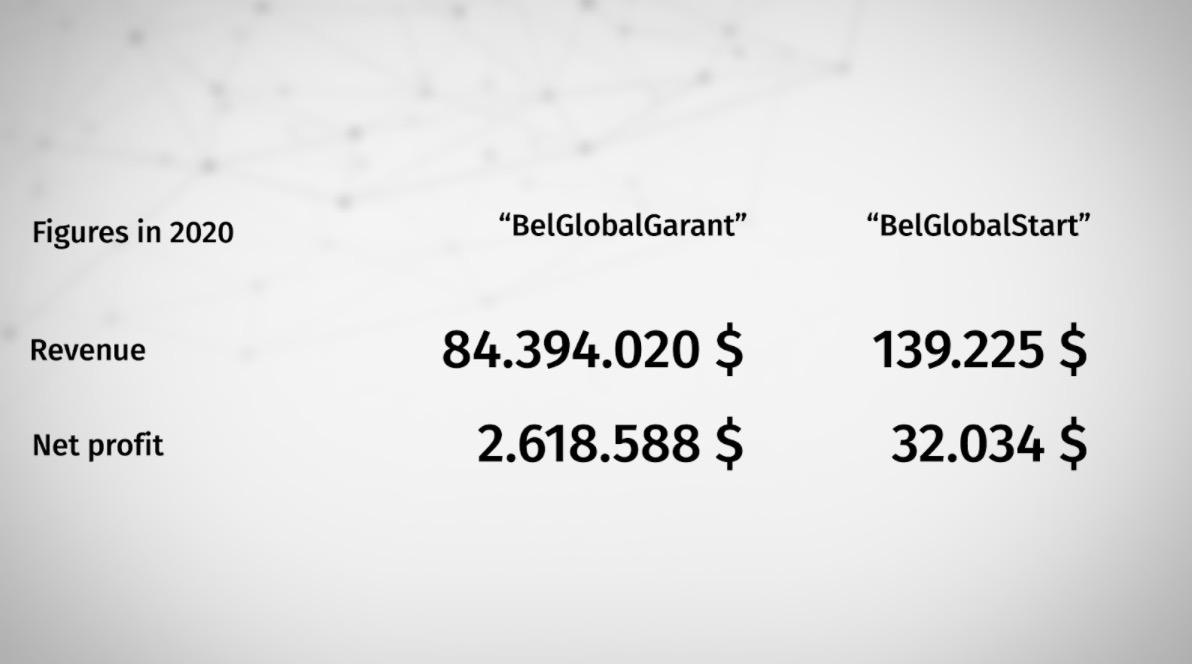 Anyway, as appears from the documents leaked by Cyber Partisans, Tiateryn, as well as many other oligarchs, endowed the Lukashenka’s circle with cars. He presented a silver Rolls Royce 1954 to The President Security Service through his company “BelGlobalStart”. The cost of the car at that moment was about $100.000.

Looks like he also gave a car to a TV host, Palina Shuba, who has known Lukashenka since she was 12. In 2019 there was an email sent to the company’s account with the proposal to sell a red MINI Cooper 2019. The purchase contract was signed in the name of Palina Shuba. The car cost mentioned - almost €26.000.

The agreement also stated Shuba’s VIN-number. Interestingly, Palina Shuba indeed owned such a car. Nevertheless, she denies any car sale deals, although doesn’t deny the fact that the car was bought by Tiateryn. 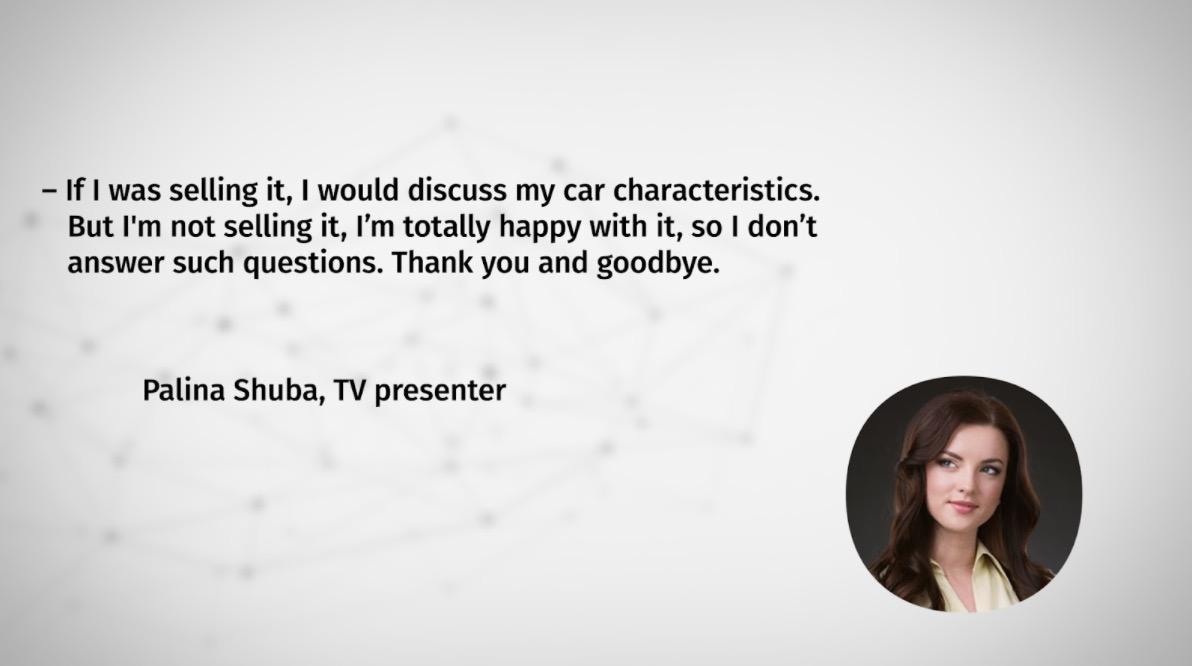 Then in 2019 there was another car purchase, which followed the same “Shuba” scheme. But this time the car was bought for Lukashenka’s personal doctor Sviatlana Kanashenka. The car is worth $63.000. 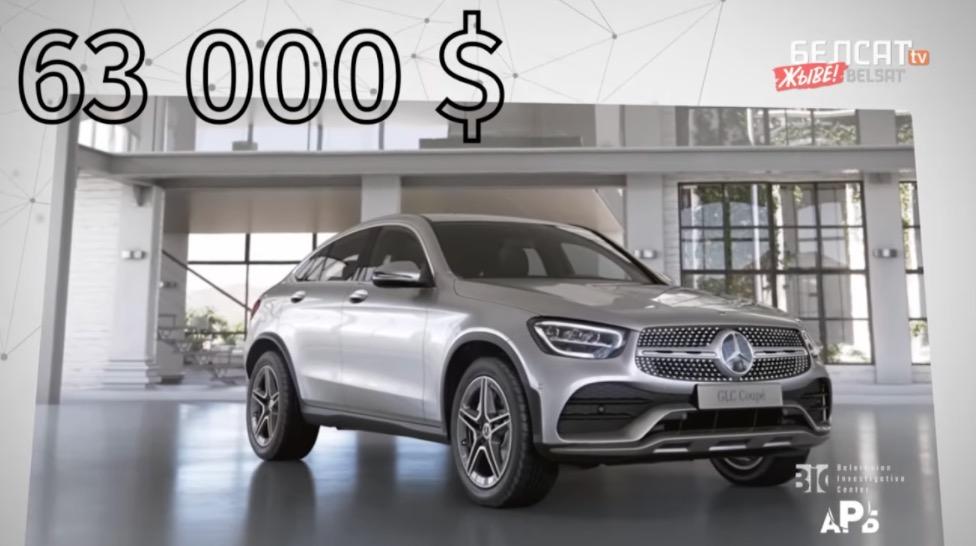 Both Kanashenka and the auto dealer refused to give any comments.

Anyway, amidst the political crisis and pandemic, Siarhei Tiaterun wasn’t thriving. He got hit in different business areas.

In 2020 Tiateryn was moved by his competitors in media business, which he was running together with Leanid Mints, husband of singer Alesya and Anatoliy’s Yarmolenko son-in-law.

We are talking about advertising sales and measuring television ratings. This business was hooked by state TV managers.

His other problem is connected to his daughter Tatiana, the co-owner of the bar Svobody.4.

On October 26 2020 on the day of “National Ultimatum” the bar, as well as many other places, was closed. After that the bar was being inspected more frequently. Eventually, the bar shut down. The situation with his daughter’s bar came out as a real pain in his neck.

In June 2021 the businessman got under the 4th package of european sanctions and in early August he resigned from the position of the Head of the Tennis Federation due to failure of his sportsmen during the Olympiad in Tokyo.