26 November 2021
Fake news of the week: Visa-free regime for migrants from the Middle East from Maria Petrashko, the definition of "state terrorism" from Vadim Gigin and fair prices for shawarma from Karanik. Sly news

Migrants who go to the European Union via Belarus have become the main topic of news on state television. All the Belarusian media talk about their lives, and it already resembles some kind of reality show: migrants woke up, migrants ate, migrants went to rest, migrants were sold overpriced shawarma

Subjects
Migrants who go to the European Union via Belarus have become the main topic of news on state television. All the Belarusian media talk about their lives, and it already resembles some kind of reality show: migrants woke up, migrants ate, migrants went to rest, migrants were sold overpriced shawarma.

"Yesterday's shawarma situation, we're still sorting it out and clarifying what happened. It looks very much like a planned provocation," Karanik said in an interview with the ATN program "The Main Question".

"They peacefully asked the Poles to let them into Germany. A Polish officer came up, thank God we filmed it, you can even hear his voice. He said that this is how you should do it, that you should submit an application at the checkpoint, we will consider it, and so on. So he actually sent them to this checkpoint. And they all got off and went there. Then what happened next. The next episode. There were no stones. They knelt down in front of these Polish officers, realizing that they would probably already be let through, or their applications would be taken. Migrants kneeled down in front of them, that they were inconveniencing them, and started asking to be let through. They weren't let through. And that's where this scuffle started. The Poles turned on the water cannons," said Lukashenko in an interview with the BBC.

On November 17, the day after another clash on the border, a pro-government political scientist, the head of the «Knowledge» society Vadim Gigin, told a similar story. He also claimed that there was some kind of video.

"Yesterday we saw, literally fresh, a mass execution of refugees. It was an act of state terror. Because there is video confirmation: Polish border guards through the fence persuaded refugees to come to the crossing point. They gathered them there deliberately. They used water cannons beforehand. And people were demonstratively subjected to this execution with the use of special means and these water cannons" - said Gigin within the framework of the so-called "Public investigation of crimes against refugees at the border".

Vadim Gigin repeated about the same thing to an RBC correspondent:

"This was Polish authorities’ reaction to Merkel's call to Putin, and then to Lukashenko. You can clearly see on the footage how it happened, the Polish military came to the fence and in English urged people to come to the checkpoint. You can see them speaking English: “Come there and show your documents”. They brought water cannons there in advance, and they water cannoned people, and actually provoked people.”

Under this interview, the telegram channel "Yellow Plums" even posted a link to the video that Gigin was talking about. It was posted on the morning of November 17 in the same telegram channel. 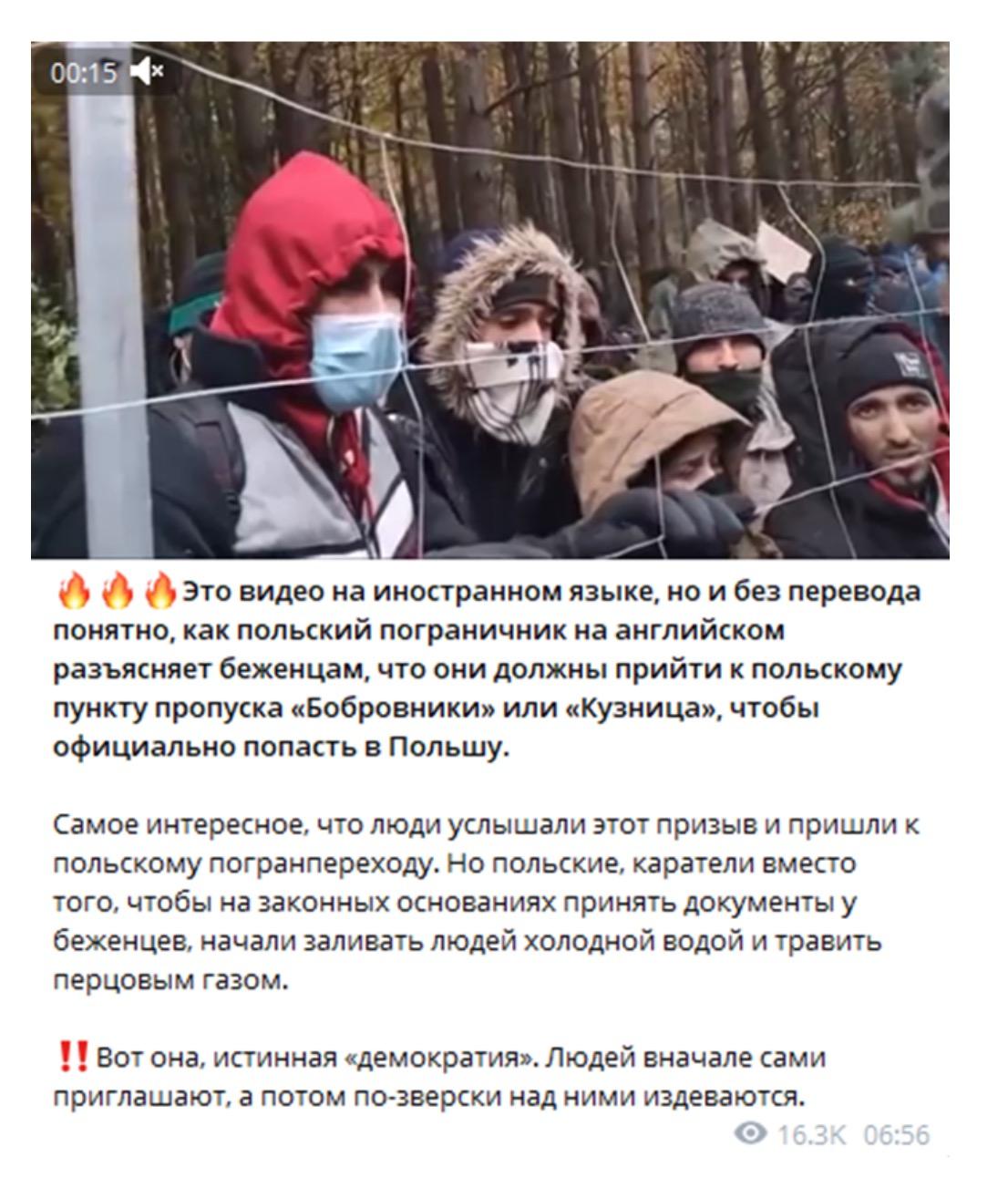 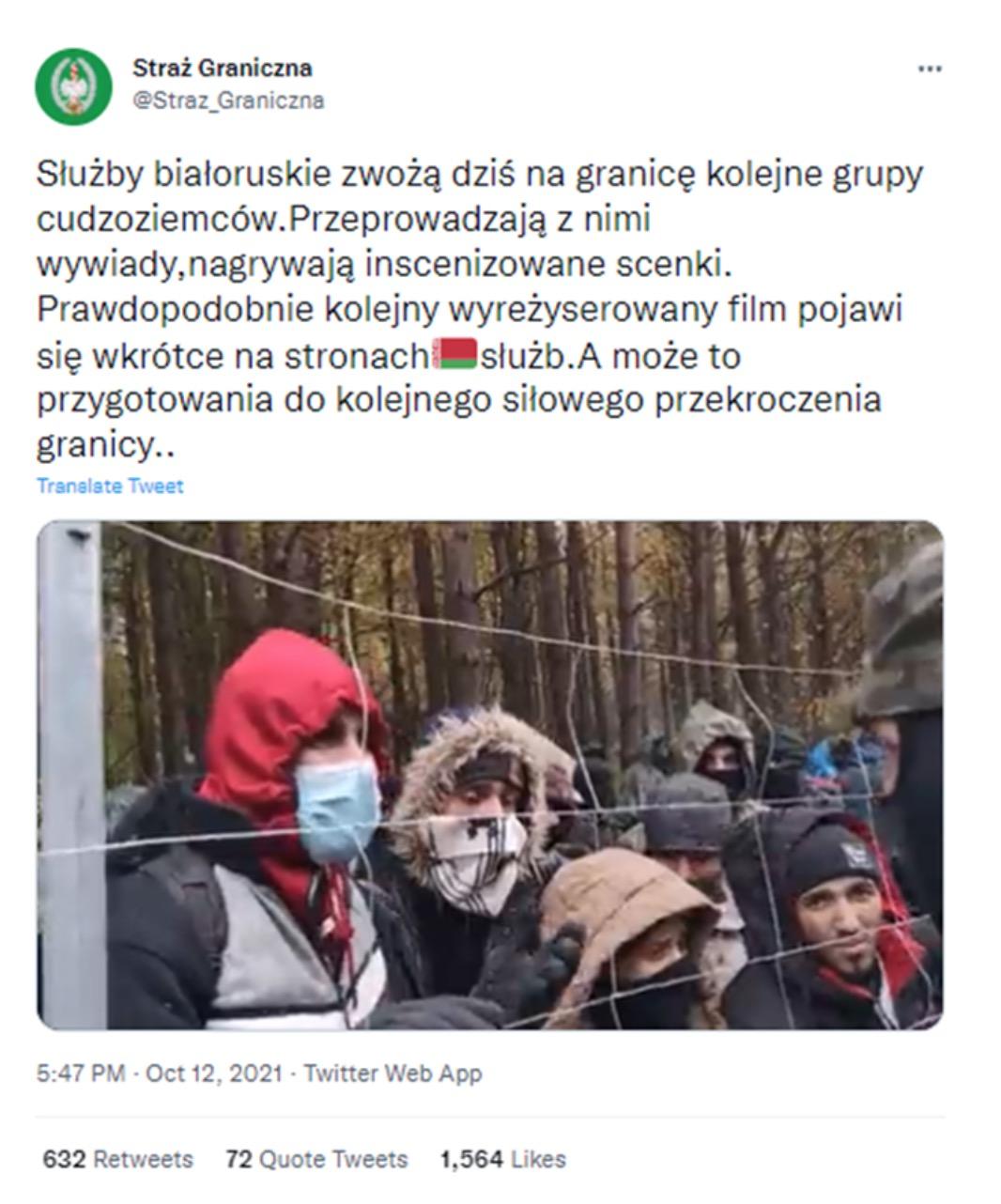 Now notice the date when the video was published. October 12, 2021. That is, the “insidious” conversation with migrants, of which Gigin accused the Polish military, and which was allegedly provoked by Angela Merkel's phone call to Lukashenko, took place more than a month before the clashes at the border and the phone call itself.

After the incident at the border, Belarusian and Russian journalists began spreading information that migrants were water cannoned in sub-zero temperatures.

The telegram channel “Yellow Plums” stated that the temperature on the border with Poland dropped to -1 degree. 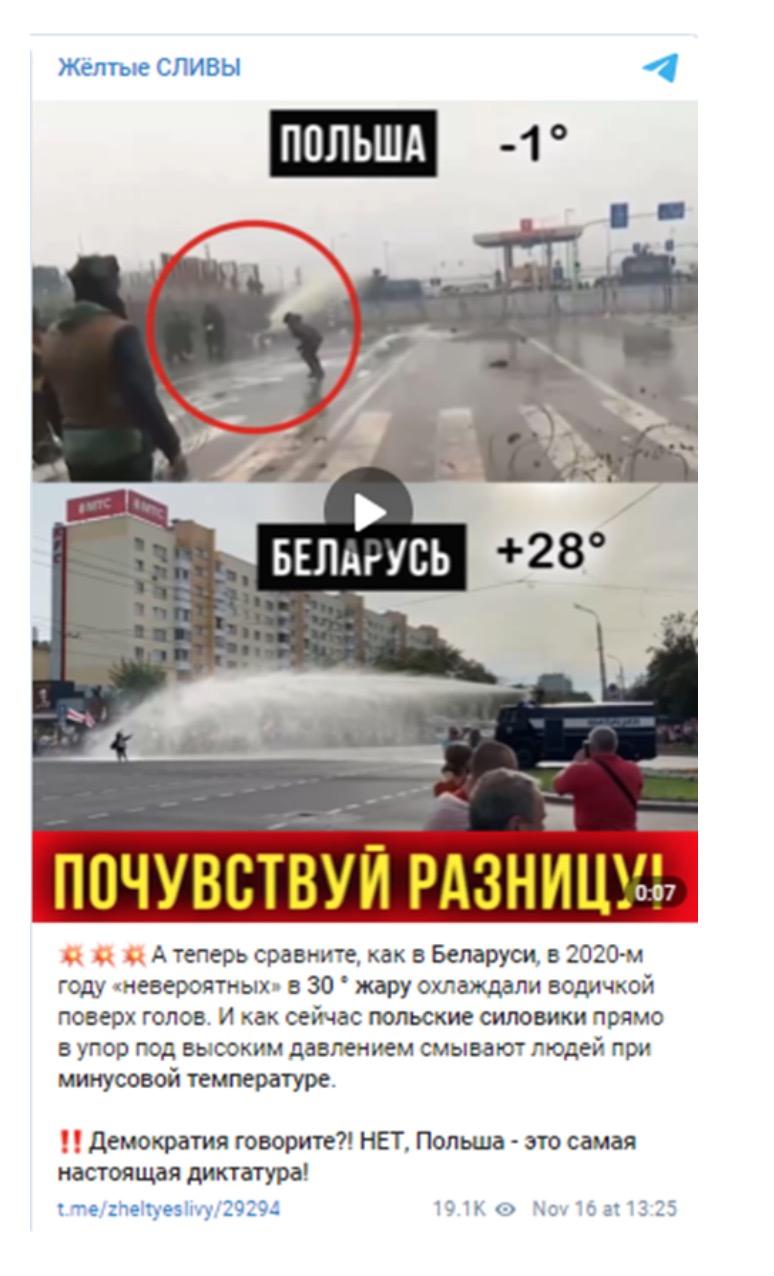 And this is what the TV channels "Belarus-1" and "Russia-1" convinced their viewers of:

"Just think about it, Polish punishers used gas and water cannons against unarmed people. And the temperature outside is below zero. And this is despite the fact that according to all international rules, water cannons are not allowed to be used when the air temperature is below 7 degrees", - said a correspondent of ATN Andrey Sych in the program "Panorama".

“This is a gesture of desperation in response to the use of tear gas and water cannons in sub-zero temperatures," - this is how Maria Petrashko evaluated migrants’ actions in her column on the TV channel "Belarus-1”.

"Border guards are mobilizing water cannons. They threaten to send water cannons into the crowd. It's freezing outside" - said Olga Skobeeva on the the program "60 Minutes".

The state-managed Belarusian Union of Journalists in its Telegram channel even said that the use of water cannons in sub-zero temperatures is an attempted murder. 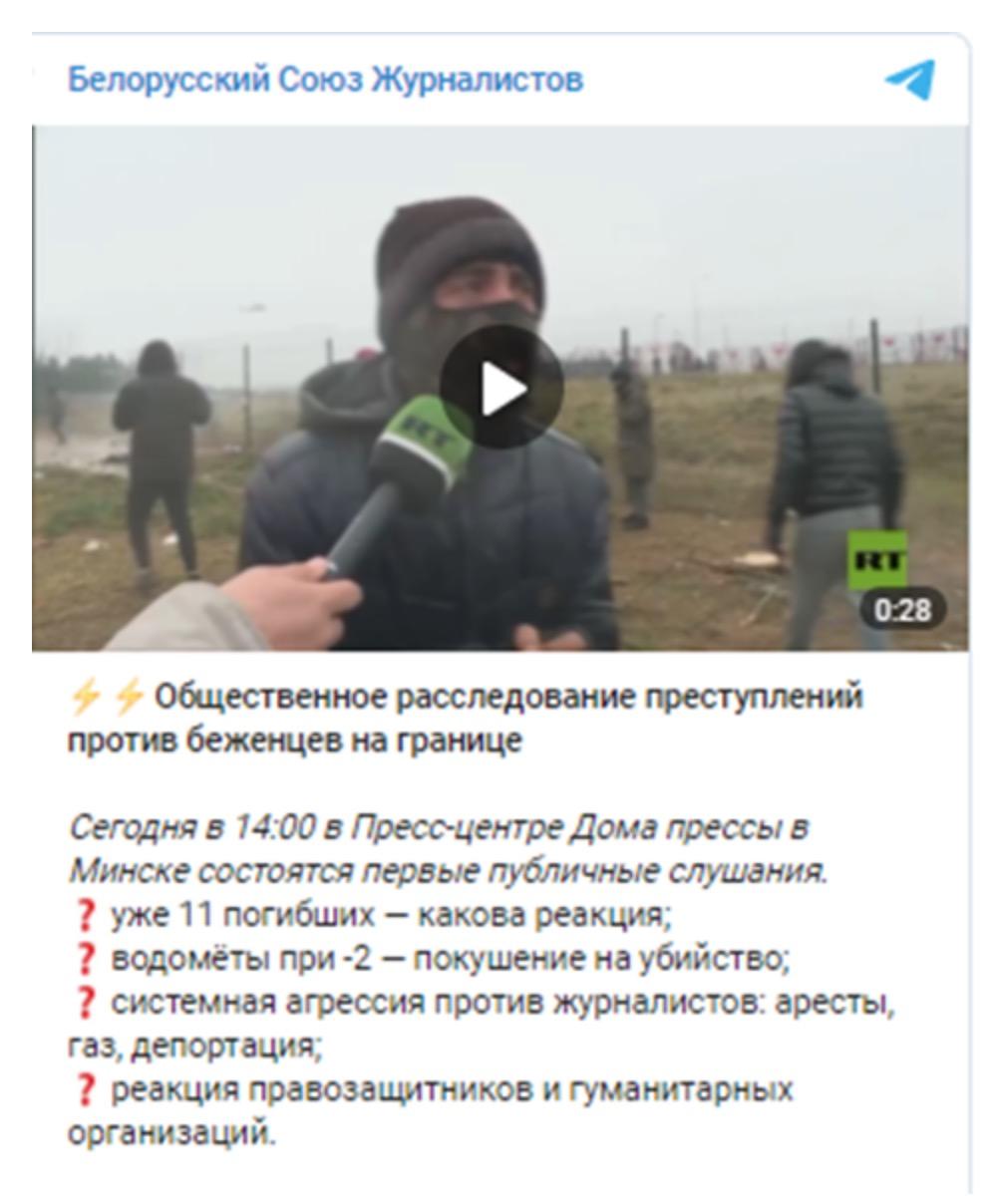 According to weather forecasters from the weather station at Grodno airport, on that day from 6 a.m. to 7 p.m. the air temperature ranged from 2 to 4 degrees. The same temperature was confirmed by the Prosecutor General of Belarus, Andrey Shved:

"Only on November 15-16 numerous facts of illegal deportation of refugees from the territory of Poland were recorded and documented, the use of water cannons against them, containing chemical mixtures at an ambient temperature not exceeding 4 degrees".

It is known from the media that citizens of, for example, Iraq, Iran, Syria, Afghanistan and Pakistan are massively trying to illegally enter the European Union through the Belarusian border. Visa-free entry into Belarus for 30 days is established for the citizens of 76 countries. Of these countries, only Iran and Pakistan have a 30-day visa-free enter into Belarus. There is a note for them that visa-free entry is possible only if they have a valid multiple Schengen visa or an EU visa in their passport. But if a foreigner had this visa in his passport, there would be no need for him to try to cross the border with the EU illegally. From what we can conclude that those who come to Belarus don’t have this visa. Citizens of Afghanistan, Syria and Iraq are not on the "visa-free" list, which means they need a visa, and they get one specifically.