Crowds of tourists from the USA can’t get into Belarus, a "sensational" referendum from Lukashenko, and why didn’t Putin actually come to Minsk to sign the integration programs?

12 November 2021
Fake news of the week: Crowds of tourists from the USA can’t get into Belarus, a "sensational" referendum from Lukashenko, and why didn’t Putin actually come to Minsk to sign the integration programs?

In the Editors Club program, pro-regime political analyst Alexey Dzermant claimed that many American tourists had previously come to Belarus

This was said in the context of the US demanding the closure of the Belarusian Consulate General in New York. Previously we tried to find out from Dzermant where he got this information but he refused to reveal the source. However, this time, apart from the false facts about the flow of American tourists to Belarus, Dzermant also smeared our journalists, saying that they did not introduce themselves when they called him and that we did not want to know the truth, but simply wanted to discredit him.

"I have recently made a comment for "SB. Belarus Today" on the closure of our Consulate General in America and said that, indeed, quite a lot of Americans used the services, came to our country. Well, I said that quite a lot of Americans did that. So, pseudo-journalists from this channel called me wondering where I got this information. I couldn’t give them a specific figure so I referred them to the Foreign Ministry, but I know that the figure was great in 2019 – more than a thousand tourists. So then they insisted that I had mentioned “a great deal” of Americans, to which I asked them to introduce themselves. Then a pause and beep-beep-beep. So I said goodbye! You do not want the truth, you simply want to discredit me," said Dzermant on "Belarus-1".

In that phone conversation, Dzermant did not give us any figures. Even the official data he most likely learned from us - in the very program, in which we exposed his lies. Moreover, even in this program, he lied again, saying that there were more than a thousand tourists.

"According to Belstat, there were only 146 tourists from the United States who visited Belarus last year. In the pre-Covid 2019 – 859 tourists, but these figures still do not show a large influx of Americans in our country," said Dzermant in the same program.

Secondly, when Dzermant asked what kind of media we were, our journalist answered immediately  that he was presenting the program called "Sly News". That's how it was:

- And what media are you from?

- I present the program "Sly News".

On the TV channel Belarus-1, Dzermant continued to stand his ground, saying that the traffic of American tourists to our country was "serious".

"We had serious traffic from Western Europe in pre-Covid times and from the United States too. The question is that they have created difficulties for the Americans themselves. It doesn't matter. The main thing for them is to create a fake. This is not journalism, this is the rock bottom," continued Dzermant on "Belarus-1".

In fact, Americans make up less than 0.5% of the total number of tourists who came to Belarus in 2019. Moreover, the official Minsk started the mutual reduction of diplomatic missions. The Belarusian Foreign Ministry reduced the number of employees of the U.S. Embassy in Belarus twice in 2021. Now there are 5 people left to work there. Because of this, only a limited number of types of U.S. visas can now be obtained in Minsk. For the rest people have to apply to the embassies in other countries.  By the way, according to Belstat, 859 tourists from Belarus visited the United States in 2019.

Dzermant doesn’t care how much difficulty Minsk has created for its citizens. He only worries about the non-existent crowds of American tourists who allegedly used to travel to Belarus.

Nikolay Shchekin, candidate of Philosophical Sciences, spoke on STV channel about how the constitutional referendum in Belarus would break the worldview in the West. After all, it turns out referendums have not been held there for a long time.

"There have been no referendums in Eastern Europe or in the West in general for the past 20 years. There will be a precedent. The referendum on the Constitution in the Republic of Belarus will, by and large, break the entire worldview in the West. It will be the strongest blow to the so-called democracy. This is the most important thing. The point will be set," said Shchekin on CTV.

Nikolay Shchekin is the head of the Sociology Department of the State Scientific Institution "Institute of Sociology of the National Academy of Sciences of Belarus". 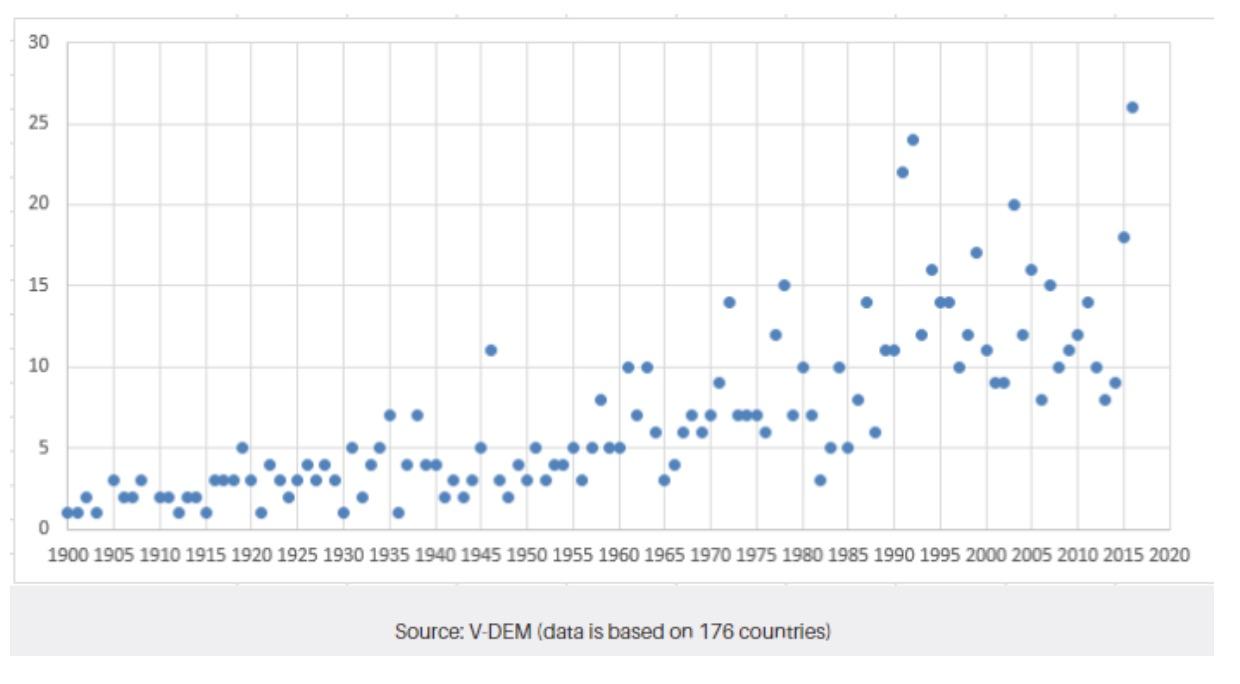 It is hard to imagine that he does not know about the referendum that took place in 2016, when Great Britain voted to leave the EU, or the scandalous referendum on Catalonia's independence from Spain in 2017. By the way, many "minor" referendums on less serious issues are often held in Western countries.

For example, Italy held a referendum on reducing the size of parliament in September 2020, and Switzerland held as many as nine referendums in 2020.

In 2016 alone, 26 countries held national referendums. In 2015, there were 18 countries. So Belarus won't surprise anyone in the West with its referendum once in 18 years. The last one was held in 2004, and then Alexander Lukashenko got the right to be elected as President an infinite number of times.

The blogger, who runs the TG-channel "Ludajor" and a part-time author of "SB. Belarus Today, Yuri Terekh said that no one had ever seen the media of the Union State of Russia and Belarus.

"For example, the publication of the newspapers "Union Veche" and "Union. Belarus – Russia" requires a total of more than 4.5 million euros. Tell me, have you ever read these newspapers? In general, has anyone who reads these texts seen them live? Well, again, apart from the inserts in “Komsomolskaya Pravda”? They certainly exist somewhere, the efficiency in the history with such financing is almost negative", wrote Yuri Terekh in his TG-channel.

Indeed, the “Belarusian Post Office” catalog does not contain such newspapers as "Union Veche" and "Union. Belarus - Russia". But we found them at sb.by. They are not even newspapers, but several pages in the form of inserts to other newspapers. In Russia the newspaper "Union. Belarus - Russia" is published as an insert in the "Russian Newspaper", while in Belarus it is an insert in the newspaper "Belarus Today. This is even mentioned on the website of the "Russian Newspaper" itself.

The "Union Veche" is a joint creation of the Russian newspaper "Komsomolskaya Pravda" and the Belarusian "Narodnaya Gazeta". Journalists of the holding "SB. Belarus today" are one of those who prepare publications for the Union press. So, following Terekh's logic, this state holding is also involved in division of the funding for the preparation of these unpopular Union newspapers. And the question “where 4 million euros from the Union budget go" Yuri Terekh can address right there – to his colleagues.

Moscow and Minsk have approved 28 Union State programs. Putin and Lukashenko met via videoconference. The head of the TV Channel ONT Marat Markov and pro-regime analyst Alexey Avdonin excused this format by the difficult situation with coronavirus in Russia.

"If it is impossible to find a flaw in the context, they nag about the form. Nothing unusual,” said Marat Markov.

"Yes, it probably wouldn't be right for our Russian colleagues to hold such an event amidst the pandemic and lockdown until November 7. So if the president of the Russian Federation met directly with a large circle of people, this of course would be subject to harsh criticism," Alexey Avdonin supported his colleague Marat.

Some independent analysts explained the video format of the conference by the strained relations between Minsk and Moscow. However, these are just opinions, which we personally can neither confirm nor deny. But we can say that such an argument as the coronavirus pandemic in Russia, voiced by Markov and Avdonin, looks too farfetched.

To begin with, the media at first reported, with reference to Putin's press secretary, that the meeting on the coordination of 28 integration programs was to be held not in Russia, but in Belarus.

Secondly, on November 4, the day of the videoconference on the approval of the union programs, Putin was in Sevastopol, where he laid flowers at the memorial complex. And no coronavirus prevented him from doing it. By the way, even surrounded by dozens of other people, Putin wasn’t wearing a mask.