As the EU keeps arresting Russian oligarchs’ yachts and villas, Mr. Mikhail Gutseriev, Aliaksandr Lukashenka’s friend, has been tucking away his assets from the West’s wrath. The latest insight by the Belarusian Investigative Center reveals how he has managed to transfer ownership of a range of companies to his brother while protecting other assets by making his son the ultimate beneficiary of hundreds of millions of dollars’ worth of property in London. Mr. Gutseriev’s private villas and expensive commercial property thus remain under the oligarch’s control

Subjects
As the EU keeps arresting Russian oligarchs’ yachts and villas, Mr. Mikhail Gutseriev, Aliaksandr Lukashenka’s friend, has been tucking away his assets from the West’s wrath. The latest insight by the Belarusian Investigative Center reveals how he has managed to transfer ownership of a range of companies to his brother while protecting other assets by making his son the ultimate beneficiary of hundreds of millions of dollars’ worth of property in London. Mr. Gutseriev’s private villas and expensive commercial property thus remain under the oligarch’s control.

In mid-2021, Mr. Mikhail Gutseriev, a Russian oligarch with an estimated net worth of around $2.5 bn, 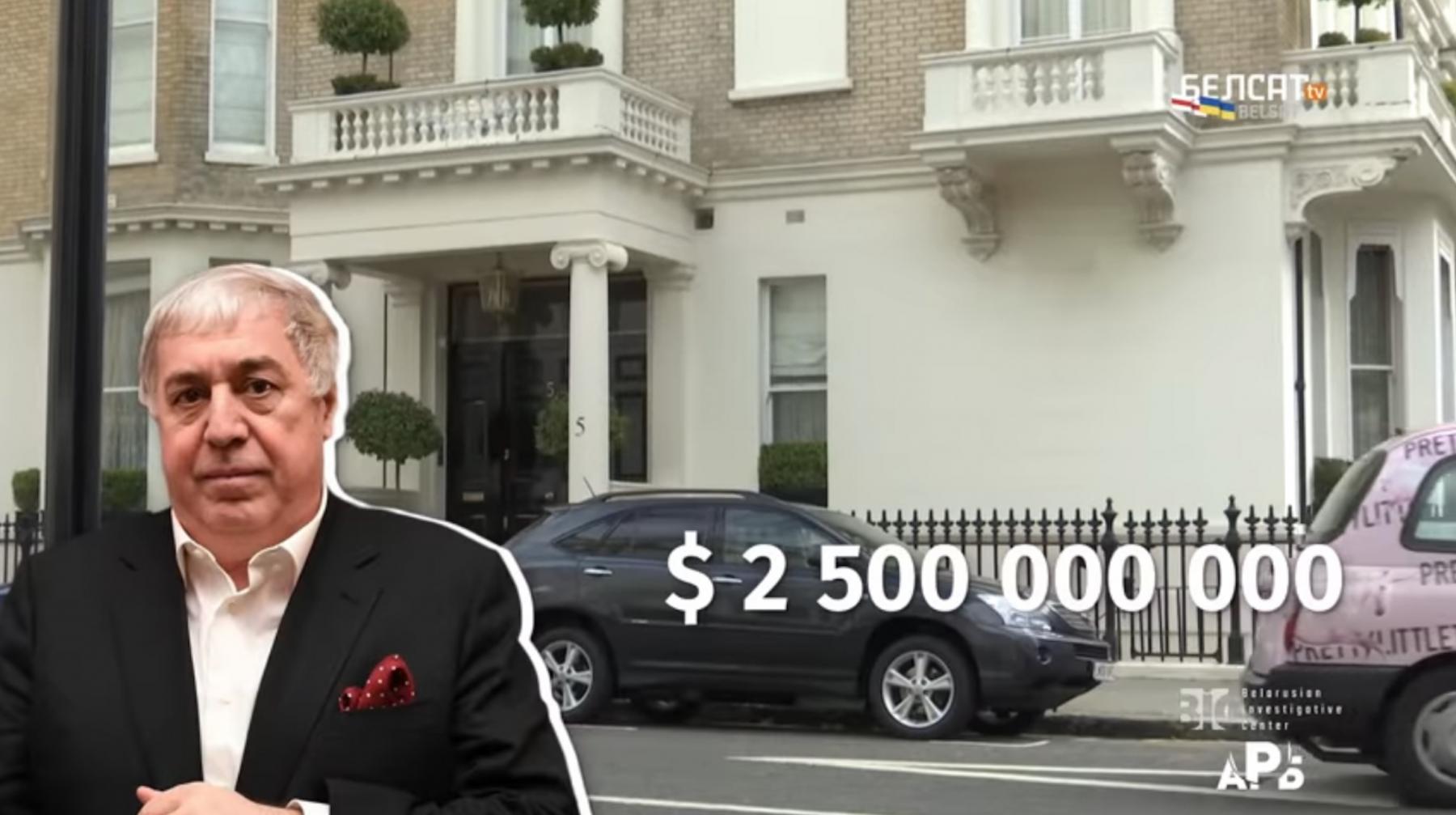 became a target of EU sanctions on the grounds that his proximity to Belarus’ dictator Aliaksandr Lukashenka enables him to influence the country’s political elites. Although the UK sanctions soon followed, wreaking havoc on some of Mr. Gutseriev’s assets, the oligarch had managed to disguise some of his holdings from the watchful eye.

Recently, a former staff at Gutseriev’s office leaked to the media a list of the oligarch’s London assets owned via tax heaven companies. The Belarusian Investigative Center, the OCCRP, Transparency International and the Guardian have managed to identify seven properties 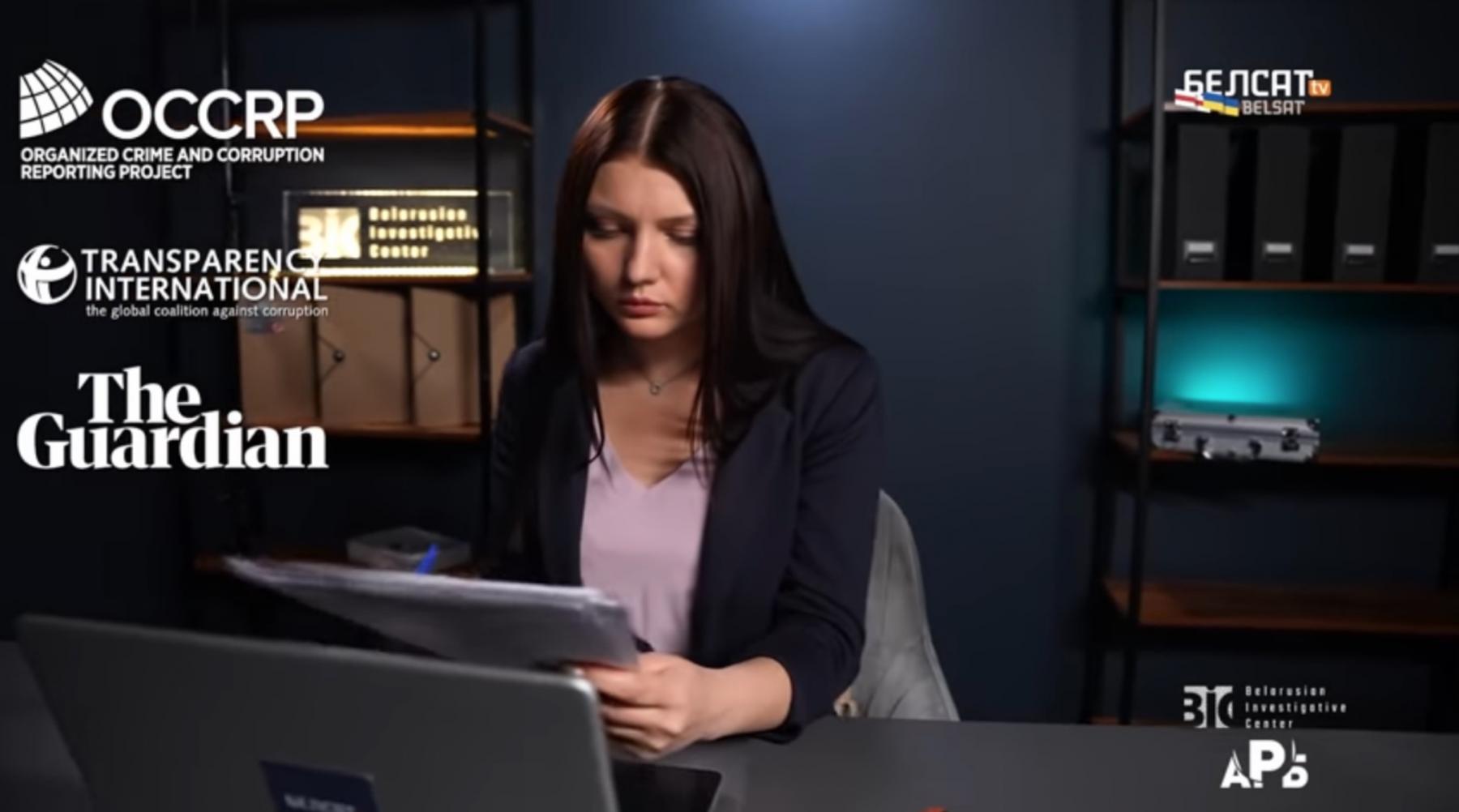 with the total market value of $200 m owned directly or indirectly by the Gutseriev family.

One such property located in South Kensington - one of London’s wealthiest districts - was hit by a scandal in 2013 as the oligarch’s family set to amalgamate two dwellings on Queen’s Gate Street into one six-storey mansion featuring a Turkish-style bath, a gym, and servant quarters. As the Queen’s Gate dwellings (that had been purchased in 2009 by a British Virgin Island company) were heritage-listed, a public outcry ensued.

The Times experts estimated total project cost at around $47.5 m ($40 m in property acquisition plus the cost of works of $7.5 m).

The Gutseriev family also owns a mansion on Green Street in Mayfair.

The property in London’s upscale district was purchased in 2004 by a Cyprus firm owned by Mr. Said Gutseriev – Mr. Gutseriev’s son.

The Gutseriev family’s most expensive building is located on Fleet Street, an area that was previously home to all of Britain’s national newspaper offices before becoming owned by law firms and banks. The building is made up of two pubs and an office block.

In April 2012, a recent graduate Mr. Said Gutseriev purchased the Fleet Street building for £70 m ($110 m) via his firm registered in the British Virgin Islands.

Mr. Gutseriev bought another family jewel in 2017 which triggered a media story when his company ‘Safmar’ purchased the commercial Gloucester Building for $24 m in Hammersmith, another upmarket district in London.

Under the terms of the deal, the asset was to be owned by a British Virgin Islands company with the ultimate beneficiary being the oligarch’s son Said Gutseriev.

The Gutseriev’s also owned Lilly House on Hanover Square that they managed to sell for $92 after the sanctions were announced.

After Mr. Gutseriev’s holdings in London were revealed in Pandora Papers, his spokesperson told The Guardian that Mikhail Gutseriev had no connection to the assets purchased 15 years prior, and that his son Said, an entrepreneur and the offshore beneficiary owner of the majority of the oligarch’s assets, was a UK citizen.

Yet the family’s real estate shopping streak took place mainly between 2004 and 2009 when Said was an undergraduate student and could not have been running multimillion dollar businesses. Which did not stop him from becoming the ultimate beneficiary of trusts that acquired some of those assets. Said’s representatives told the BBC that the entrepreneur did not have “any business links with his father”.

We have requested comments from the Gutseriev family, as well as HM Treasury that oversights the implementation of sanctions. We are yet to receive a response.

Mikhail Gutseriev is one of the founders of ‘Safmar’, a vast business empire with assets in oil, coal, potassium, finance, trade, real estate and media industries. His personal net worth is estimated at around $2.5 bn.

But Russia is not Mr. Gutseriev’s sole sphere of influence. He has been regularly visiting Belarus since 2000 after becoming the head of ‘Slavneft’, a joint Belarus-Russia state enterprise founded in 1994. According to Mr. Gutseriev, he became Lukashenka’s close associate after arranging the reconstruction of the Mozyr Oil Refinery in which ‘Slavneft’ later became a shareholder.

Although in 2002 Mr. Gutseriyev took a step away from public enterprise and decided to concentrate on his private dealings, he managed to keep his relationship with Aliaksandr Lukashenka warm. So warm, in fact, that ten years later the oligarch had built the ‘Renaissance Hotel’ in Minsk, and a commercial aviation terminal at the Minsk National Airport.

Mr. Gutseriev has also joined the ranks of Belarusian IT businessman after his son Said and entrepreneur Mr. Viktar Prakapienia (a Londoner as of recently) launched ‘Currency.com’, the first legal crypto currency exchange in the Commonwealth of Independent States.

As his business in Belarus kept expanding, Mikhail Gutseriev took on the so called ‘social burden’ that often goes along with being part of Lukashenka’s close circle. The oligarch managed to build a private school in Drazdy (the richest suburb in Minsk occupied by Lukashenka’s friends and senior public servants), the ‘Krasnasielskaye’ resort near Radashkovichy, and an Orthodox church in another Minsk suburb.

To further his friendship, Mr. Gutseriev would often treat Lukashenka’s family with lavish gifts. One of such gifts was a helicopter that the Russian businessman had bought for $14 m and put Lukashenka’s favourite red-green livery on.

On top of that, Mr. Gutseriev’s private jets have flown Lukashenka’s money men Mr. Uladzimir Peftsieu and Mr. Aliaksandr Zaytsau, as well as high-profile government officials such as the current Minister for Foreign Affairs Uladzimir Makey and the infamous Mr. Andrej Pauliuchenka (Head of the Operations and Analytics Centre and ex-chief of Presidential Security Service). Lukashenka’s own sons were also seen on board. 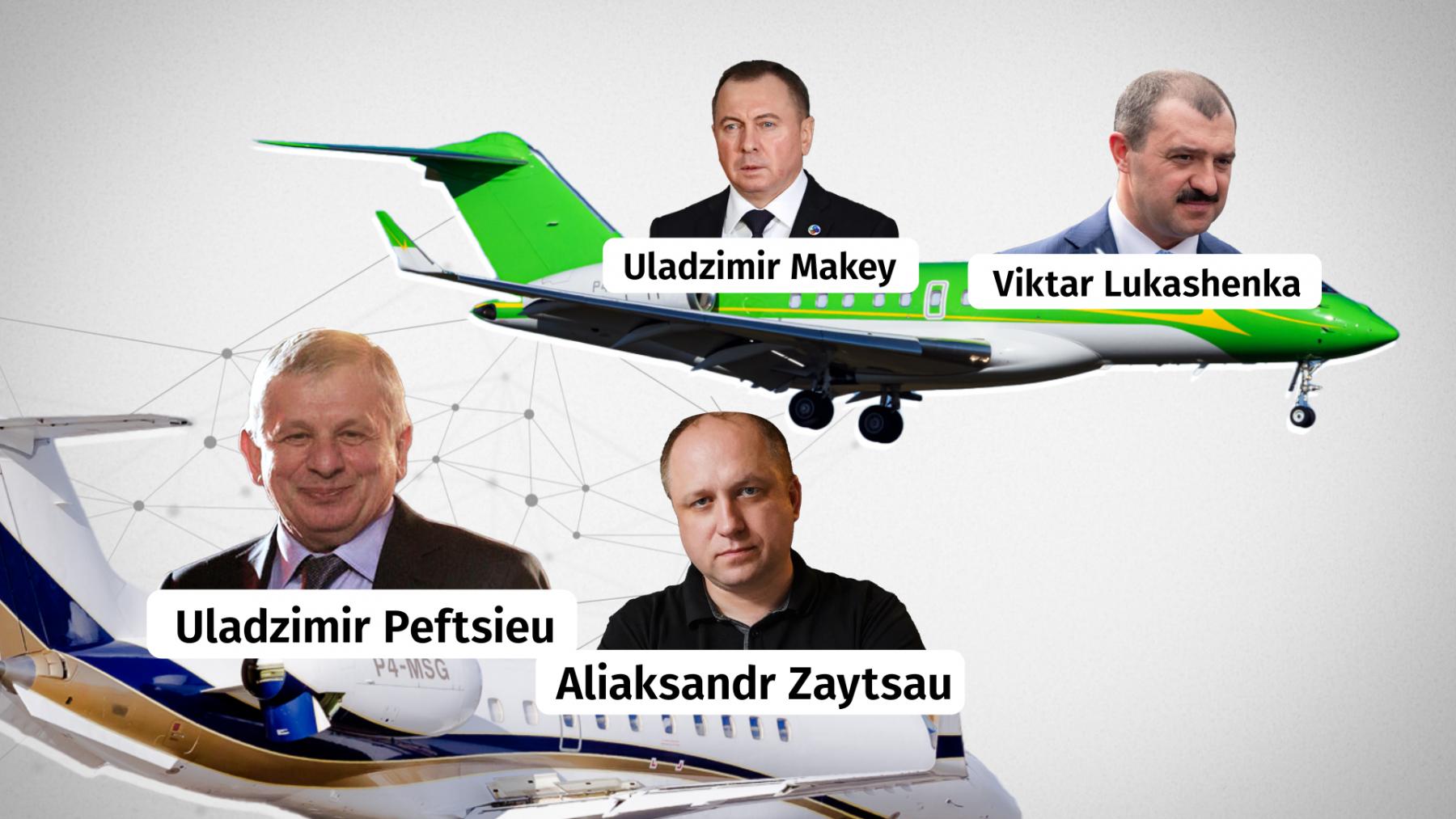 The friendship peaked during the bloody aftermath of the 2020 presidential elections when Mr. Gutseriev showed up at Lukashenka’s secret inauguration – an event that even the Russian ambassador dared not attend.

As a result, in 2021 Mr. Gutseriev ended up under EU sanctions after another round was triggered by the infamous landing of a Ryanair plane carrying Roman Protasevich, a prominent blogger.

Ten days before the sanctions were about to take effect, however, Mr. Gutseriev left his oil company ‘Russneft’ board of directors that he had been heading and transferred 37 per cent of his share in ‘Russneft’ to his brother Said-Salam who ended up becoming Mr. Gutseriev’s trustee for all major oil assets of the family. 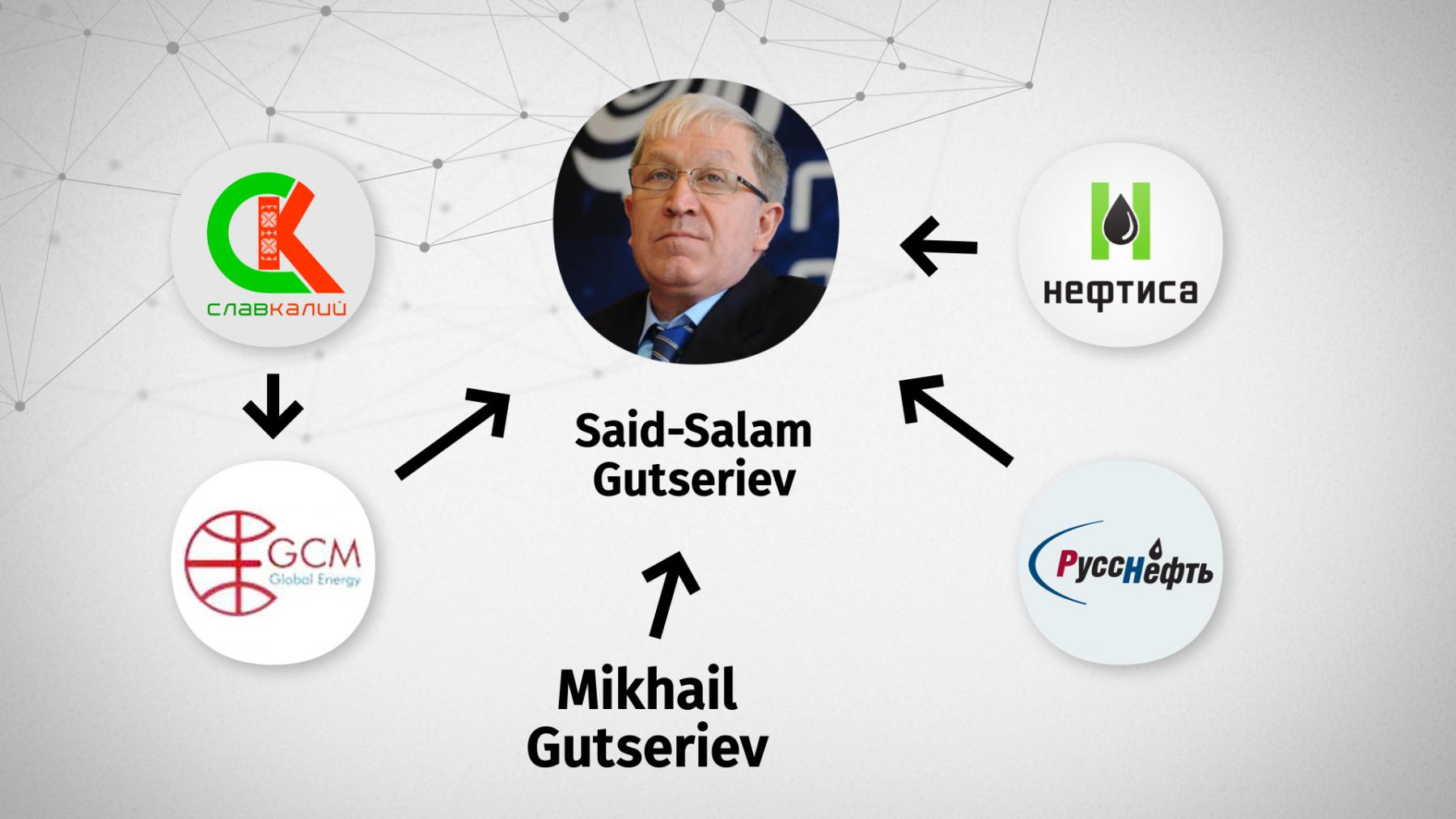 Mikhail Gutseriev’s son Said was also quick to get rid of assets that associated him with his father and Belarus. He left his position as the head of ‘Forteinvest’, an oil and gas company that he had been overseeing since 2014. Said also managed to sell his stakes in three crypto currency exchanges to his business partner Mr. Viktar Prakapienya and FTX, another crypto exchange. In October 2021 he sold Belarus’ ‘Paritetbank’ to a little-known Russian entrepreneur.

But it was not the first time when Mr. Gutseriev said goodbye to ‘Russneft’. In 2007, following a criminal investigation into illegal business operations and tax evasion, he had to leave Russia and transfer company ownership to Mr. Mikhail Prokhorov, another Russian oligarch. By 2010, however, the Russian Duma had amended certain provisions in the Criminal Code and the Russian police dropped the charges against Mr. Gutseriev. Upon his return, Mr. Gutseriev bought a 49 per cent stake in ‘Russneft’ and by 2013 regained full control of the company, making him an expert in wealth protection.

The sanctions did have some effect on Mr. Mikhail Gutseriev, however. The fate of his most ambitious project in Belarus to date, the construction of Nezhinsky Mining and Processing Plant with an annual output of 2 m tonnes of potash fertiliser, is in doubt. Mr. Lukashenka once noted that Mr. Gutseriev was one of the few people to have been granted access to Belarus’s natural resources.

Nezhinsky MPP which is being delivered by ‘Slavkali’ owned by Mr. Gutseriev, has attracted $1.4 bn in credit finance from the China Development Bank via a guarantee provided by the Belarusian Government. Additionally, two Russian banks, Sberbank and Trust, have become shareholders in the project as part of the joint financing effort. Mr. Gutseriev’s own investments in the Nezhinsky MPP are estimated between $250 m to $600 m.

Construction had been on schedule until the sanctions hit Mr. Gutseriev. Efforts to transfer his ownership of ‘GCM Global Energy’, a major UK-registered shareholder in ‘Slavkali’, to his brother Said-Salam yielded no results. The China Development Bank responded by halting an upcoming tranche and many European companies, in turn, refused to do business with ‘Slavkali’ that was now under sanctions. As a result, construction of the MPP stalled.