Last year the amount of belarusian oil products shipped through Estonia multiplied by three times. This was almost impossible to do amidst the European sanctions without manipulations with commodity codes. The scheme beneficiaries turned out to be those tightly connected with businessman Mikalay Varabey

Subjects
Kaja Kallas, the Prime Minister of Estonia, requested to deal with the Belarus transit through Estonia.

Last year the amount of belarusian oil products shipped through Estonia multiplied by three times. This was almost impossible to do amidst the European sanctions without manipulations with commodity codes. The scheme beneficiaries turned out to be those tightly connected with businessman Mikalay Varabey. This was found out by the journalists from the “Davaite razbiratsia” programme, the Investigative Journalism Center “Re:Baltica” and Delfi.ee.

What’s the scheme about?

Earlier about a half of the products was exported through European ports. But on June 25 2021 the export was officially announced impossible. It happened right after the Ryanair plane was hijacked by the Minsk, after which a whole lot of economical sectors of Belarus got under sanctions, including the oil products sector too.

Although, only the key oil products were sanctioned - petrol, diesel, kerosine, fuel oil. Their commodity code is 2710.

According to the data that our investigators received from the Eurostat, the export of oil products from Belarus to the EU decreased sharply.

At the same time an “export miracle” happened. Long before the sanctions, the supplies of oil products (commodity code) to the EU began to grow rapidly. The products under the commodity code 2707 are oils, benzol, toluene, xylene, naphthalene, which are not under sanctions. 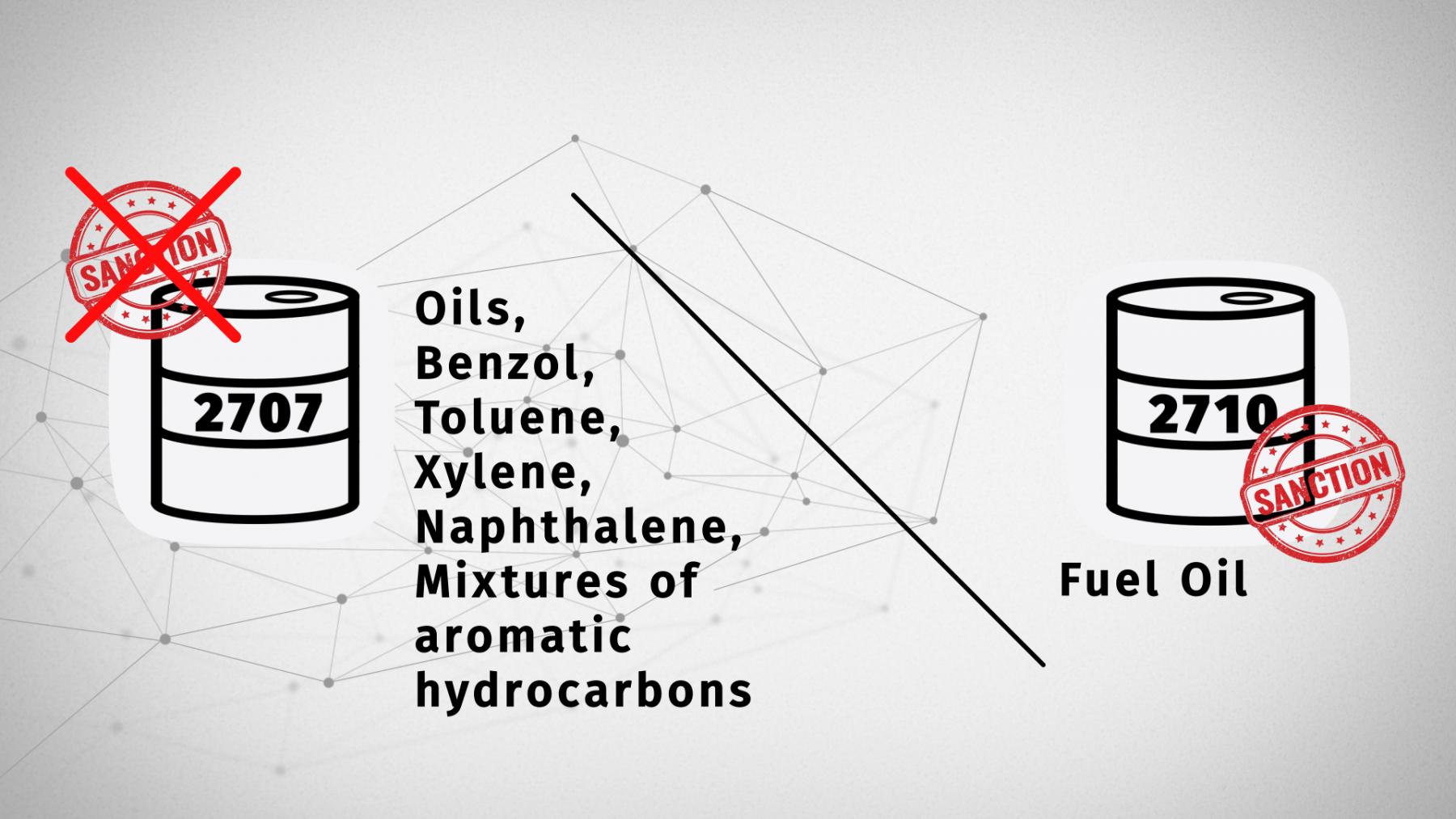 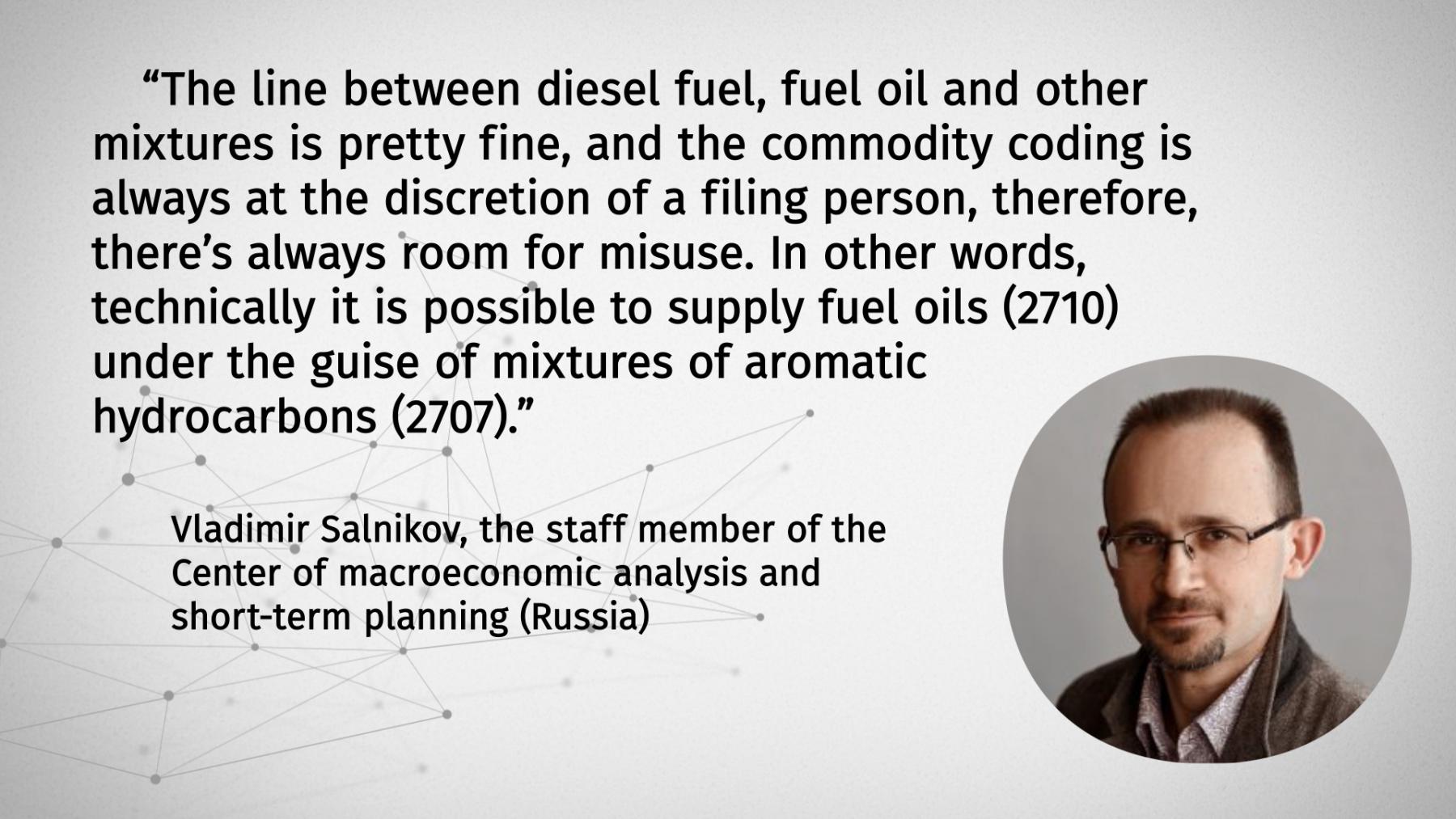 According to Eurostat, the export of oils coded 2707  from Belarus to the EU tripled to 1,7 mln tonnes, given that the soar happened during late 2020.

When compared to the data in 2019, the amount of supplies increased by more than 4,5 times in 2 years. The “export miracle” amounted to more than a half billion euro. The major flow of export goes to Estonia.

Did Estonia know about the supplies?

At the Estonian customs office we were told that they do a thorough check on exports coming from Belarus. They even check the oil products that were not sanctioned. If necessary, they even take samples and take them to laboratories. “We have started doing such check-ups this year. We suspected that the commodity code in the declaration was wrong. We checked it, took samples, but fortunately, our suspicions made no sense”, - said Piret Tinkus, the Representative of the Tax and Customs Board of Estonia. 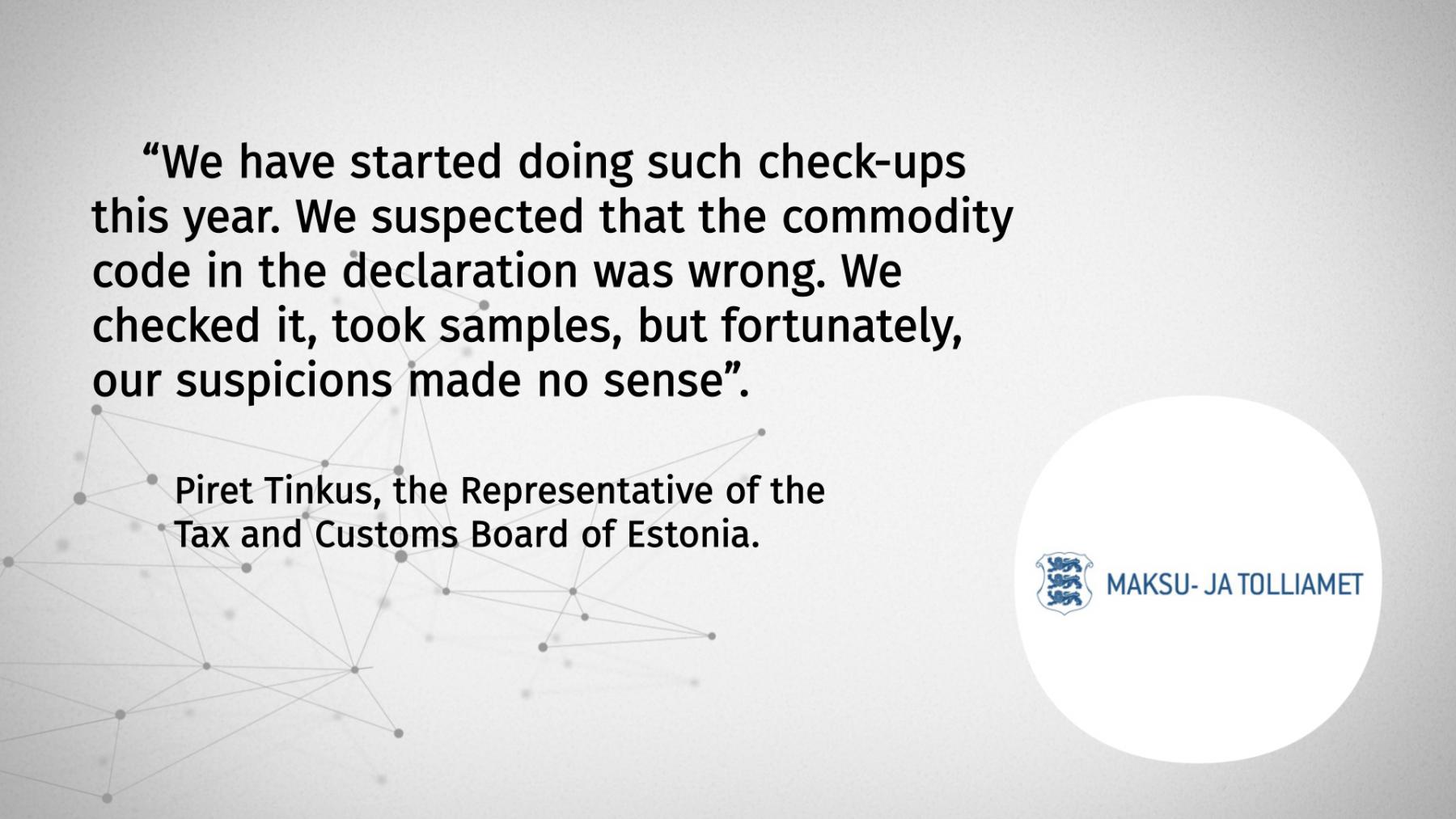 The Ministry of Foreign Affairs of Estonia were surprised to learn that the major value of belarusian oil products coded 2707 were  being exported through their country. Later Eva-Maria Lijmets, the head of the Ministry, mentioned that “the complete embargo against Belarus wasn’t imposed, thus there would always be some people and their products, which didn’t fall under sanctions”. “Although the transit of belarusian oil products through Estonia is legitimate, I totally agree that it does look bad against sanctions”, - added Eva-Maria Lijmets.

The Prime Minister of Estonia Kaja Kallas assigned the responsible Ministries to find out whether malicious breach of sanctions did take place during the transit of belarusian oil products through Estonia.

“Regarding the compliance with sanctions, Belarus received a rebuke. The situation is bad, and I take it seriously. The fundamental foreign policy must be manifested by applying it at home, thus if we agree to impose sanctions, then we have to use them. In case of failure, we should do something about it. Otherwise, we detract from our own credibility and our voice at the international level”, - thinks Kaja Kallas.

Who is behind the “export miracle”?

The journalists from Delfi.ee. Figured out that belarusian oil products to Estonia were transported by the company «Merktrans». However, the representative of the firm refused to tell us what their commodity code was.

“In 2021 “Merktrans” transported about 1,8 mln tonnes of bulk load from Belarus. Those were the oil products which are not on the sanctions list, thus are allowed for transit by Customs authorities”, - said Alyaksandar Kavaleu, the board member of “Merktrans”. 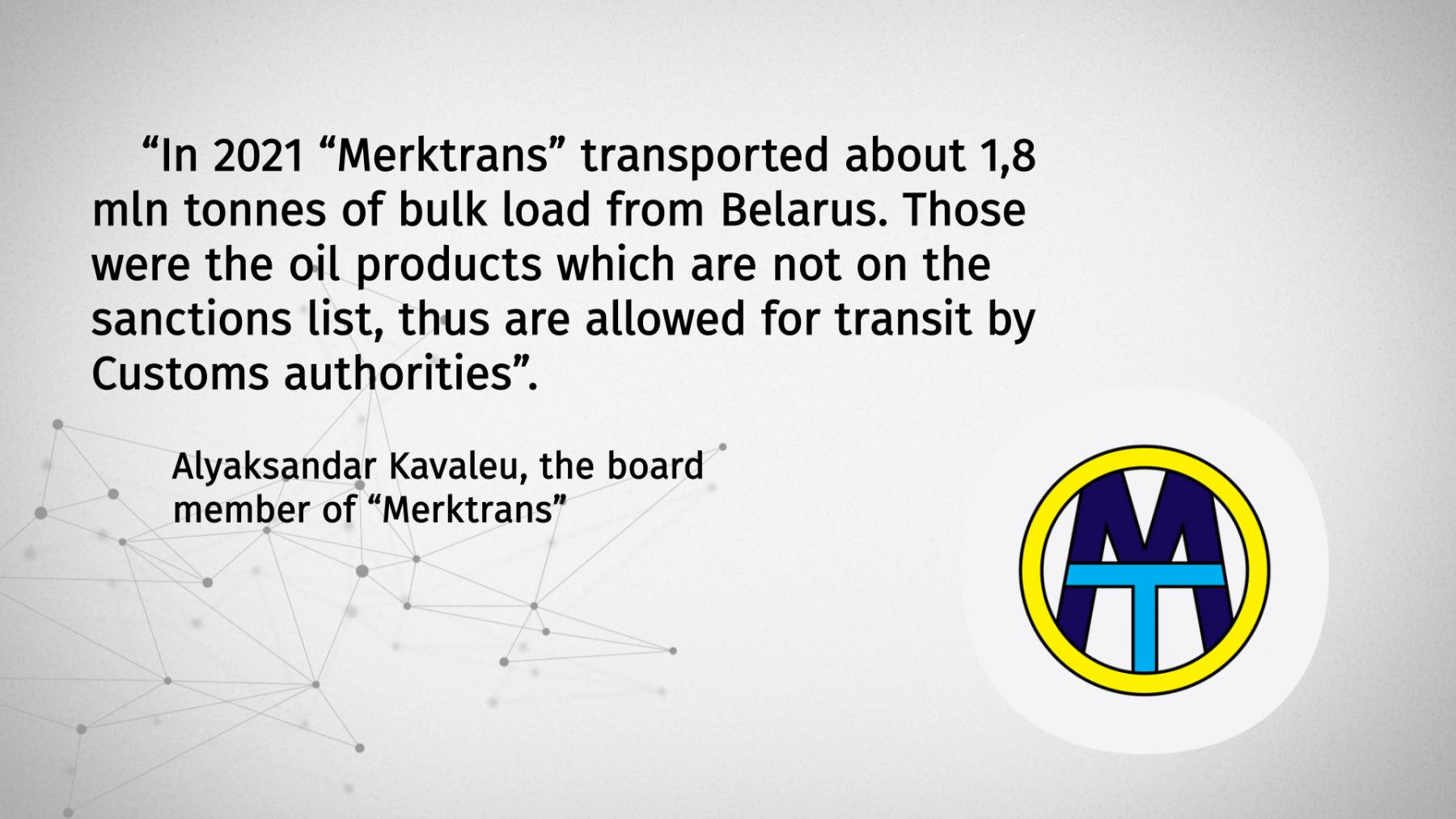 The amount of oil products shipped by “Merktrans” is fully in line with the data from Eurostat on import of belarusian oils. Then who is behind this transport operator?

Our investigators found out that this firm had connections with Estonian businessman Alyaksey Chulets, who used to be Mikalay’s Varabei partner. (Mikalay Varabei - the major oil man who is in close relationship with the authorities. 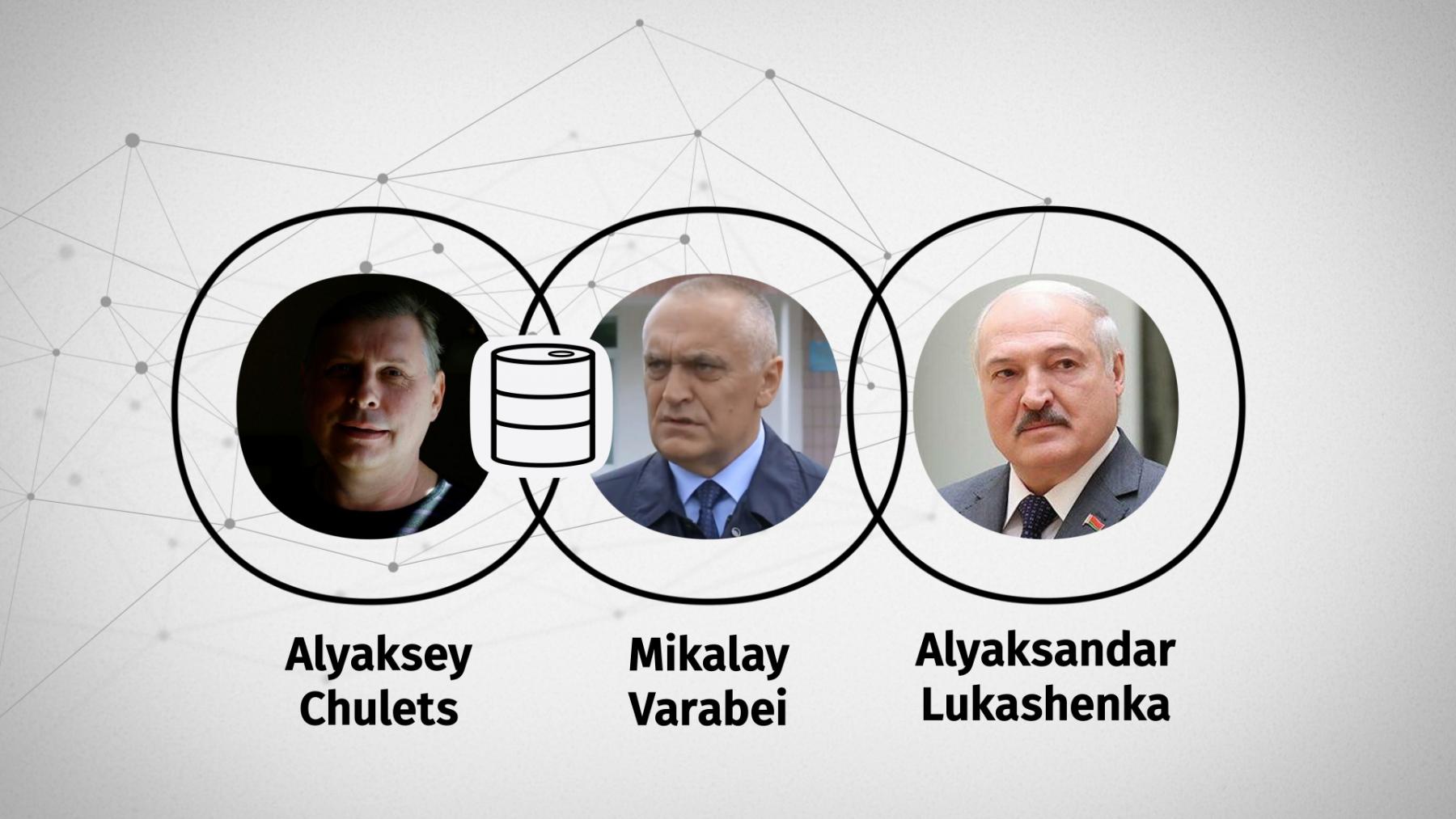 However, one of the chains of connections looks the following way. Alyaksey Chulets is a member of the board of “Merktrans”, and previously he was the co-owner of the company through the Estonian holding “Baltic Sea Bunkering”. 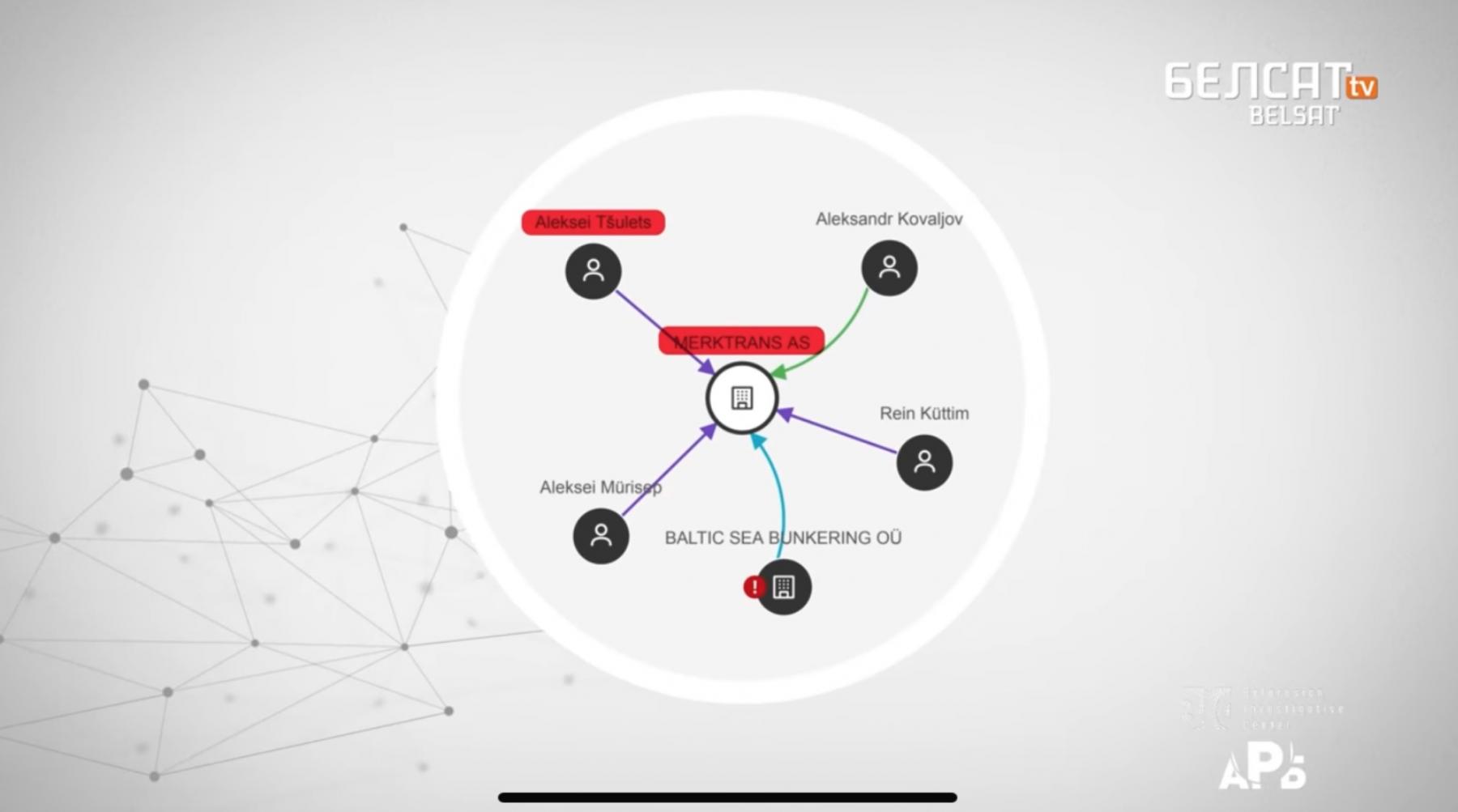 Meanwhile Mikalay Varabey was connected with “Merktrans” through his company “BelKazTrans”. In 2020 Aleksey Lysenkov, the director of the subsidiary of “BelKazTrans” in Moscow, was also the head of the representative office of “Merktrans” in Russia. 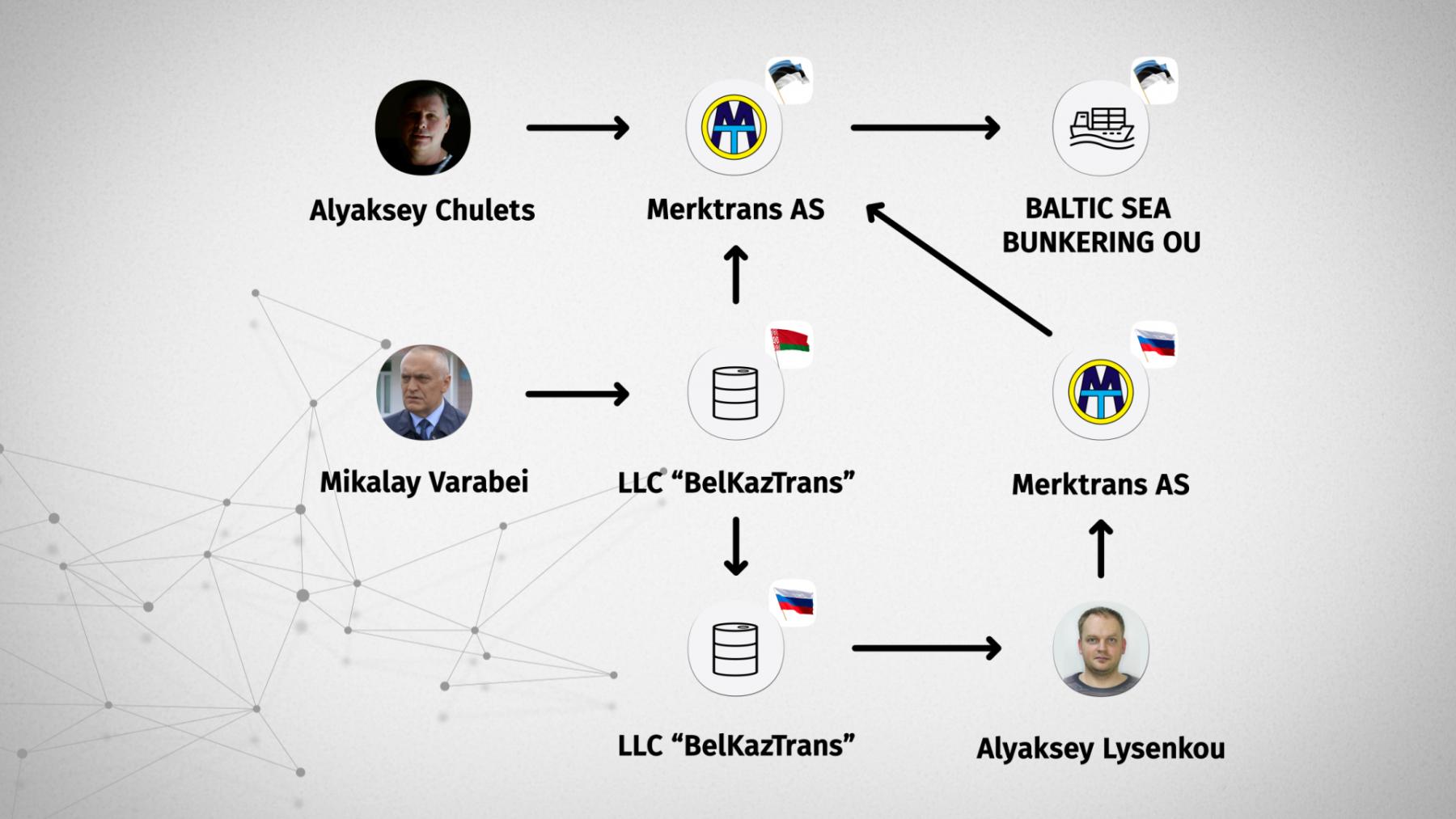 Mikalay Varabey was also the main owner of “Novaya Neftyanaya Kompaniya” (“New Oil Company”). This was the only private company that had the right to export oil products from Belarus. In October 2020 and January 2021 “NNK” sold more than 2 mln tonnes of fuel oil to transport through the estonian port Muuga. According to the market players, one of the companies that bought the fuel oil from “NNK” was “Tintrade”. It is said that the company is connected with Alyaksey Chulets.

Mikalay Varabey got sanctioned by the EU in December 2020. Later the “NNK” company also got on the blacklist. It was suspected that “NNK” was used to bypass the sanctions. 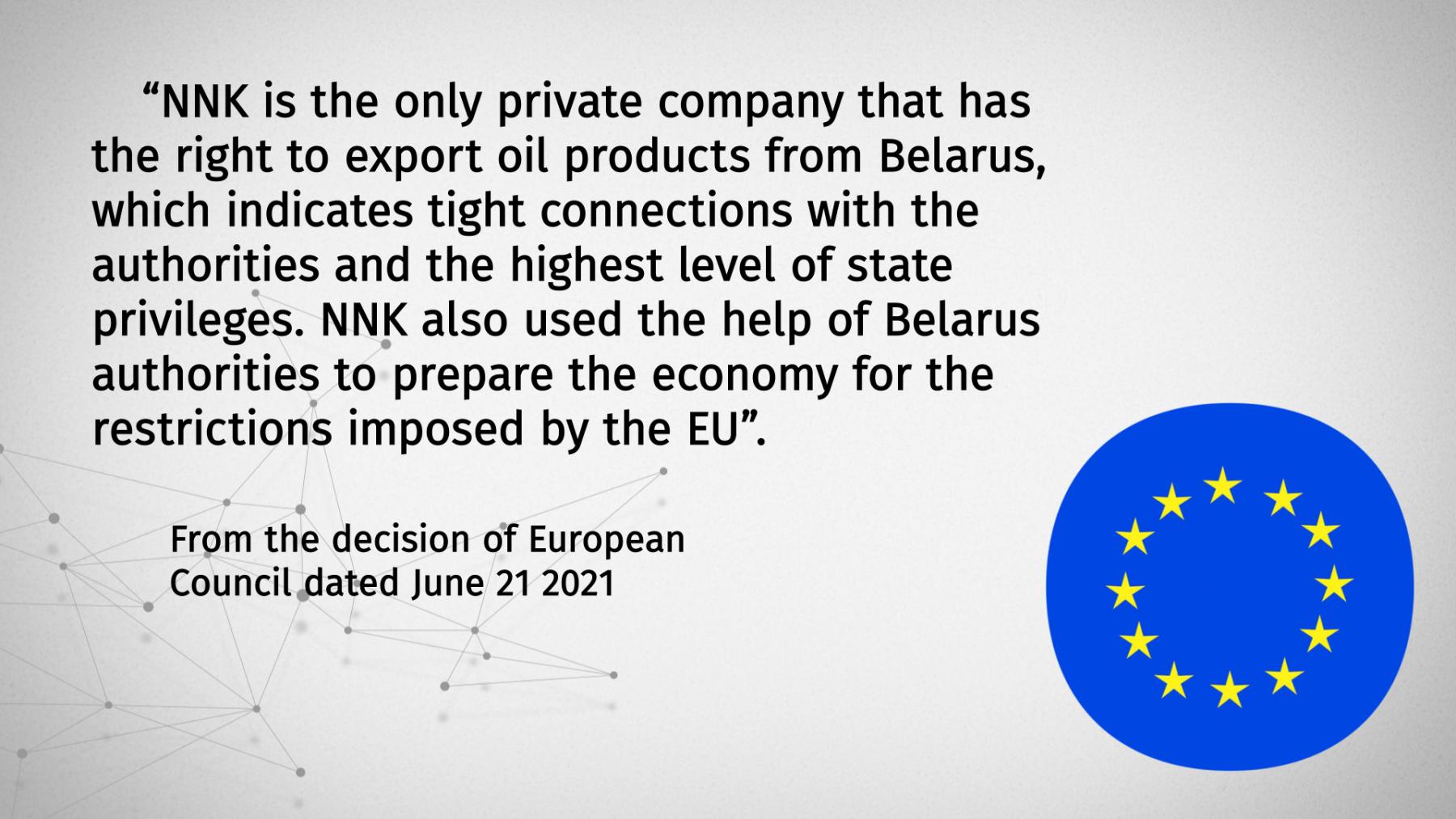 Chulets has been in the transit and port business in the Baltic countries for about 30 years. Together with this business-partner Sergey Pasters they own the Northern Port Paldiski in Estonia. Besides that, they also owned the terminal “B.L.B Baltijas terminals” in Riga, through which Belarus was transporting oil products.

In April 2021 the holding of Chulets and Pasters sold “B.L.B Baltijas terminals” to  “BelKazTrans”, which was previously owned by Varabey until December 2020. However, the owner of the company “BelKazTrans” in the latvian registry was belarusian Lydiya Ushakova. She got “BelKazTrans” right a week before the EU put the company on the sanctions list.

Little is known about Lydiya Ushakova, but only that she used to work in Varabey’s companies, was a partner of another sanctioned oligarch Alyaksey Aleksin in “Neonaftan” and is now the co-owner of a restaurant called “Brooklyn” in Minsk. Ushakova refused to comment the situation. Anyway, she didn’t happen to own the terminal for long. In september 2021 it was sold to the company registered in Cyprus, which owns a citizen of Azerbaijan.

Alyaksey Chulets denies his current involvement in any business affairs with Mikalay Varabey: “Right after the sanctions were imposed, I suspended any business endeavours with him”. 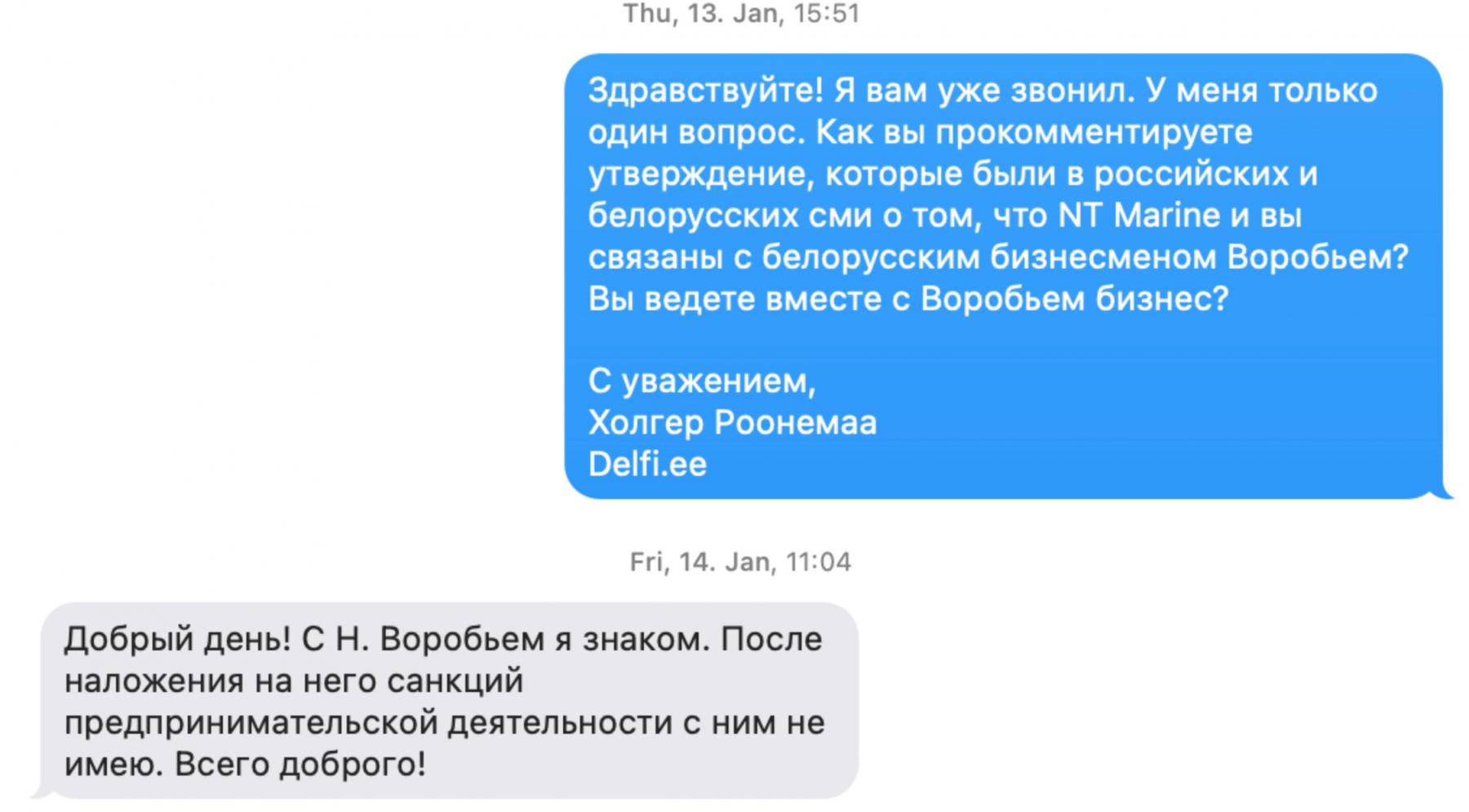 In all fairness, belarusian oil traders used to play with commodity codes earlier. For instance, a scandal with“solvents and thinners”. The oil products were bought free of duty and then sold to Europe under the guise of chemical products. The scheme existed for only one year from 2011 to 2012. In 2012 the oil products supplied amounted to 2,8 bln dollars, in comparison with 2011, when the increase accounted for 77%.  Varabey’s company was one of the players in the scheme. In 2013 Belarus had to grind the scheme to halt under the pressure of the Russian authorities who estimated their loss from re-export at 1,5 bln. dollars.