Belarus Nuclear Power Plant is one of the most disputed sites. The quality of plant construction as well as its efficiency of operating the facility raises lots of questions

Subjects
Belarus Nuclear Power Plant is one of the most disputed sites. The quality of plant construction as well as its efficiency of operating the facility raises lots of questions.  In 20221 the first power block of the power plant in Astravets was malfunctioning, which eroded trust in its efficiency. The investigators of the programme “Davaite razbiratsia '' found out that the plant was started with inconsistencies, which resulted in delays and loss of hundreds of millions of dollars. In case surplus fails to be exported, the expenses will strain on common Belarusians.

On November 7, 2020 Alyaksandr Lukashenka publicly declared the start of the first power block of the Nuclear Power Plant in Astravets. Surprisingly that a day after his official statement the plant was shut down.

During tests we found out that some measuring equipment requires replacement. The work is carried out according to the technological rules, - reported the Ministry of Energy. 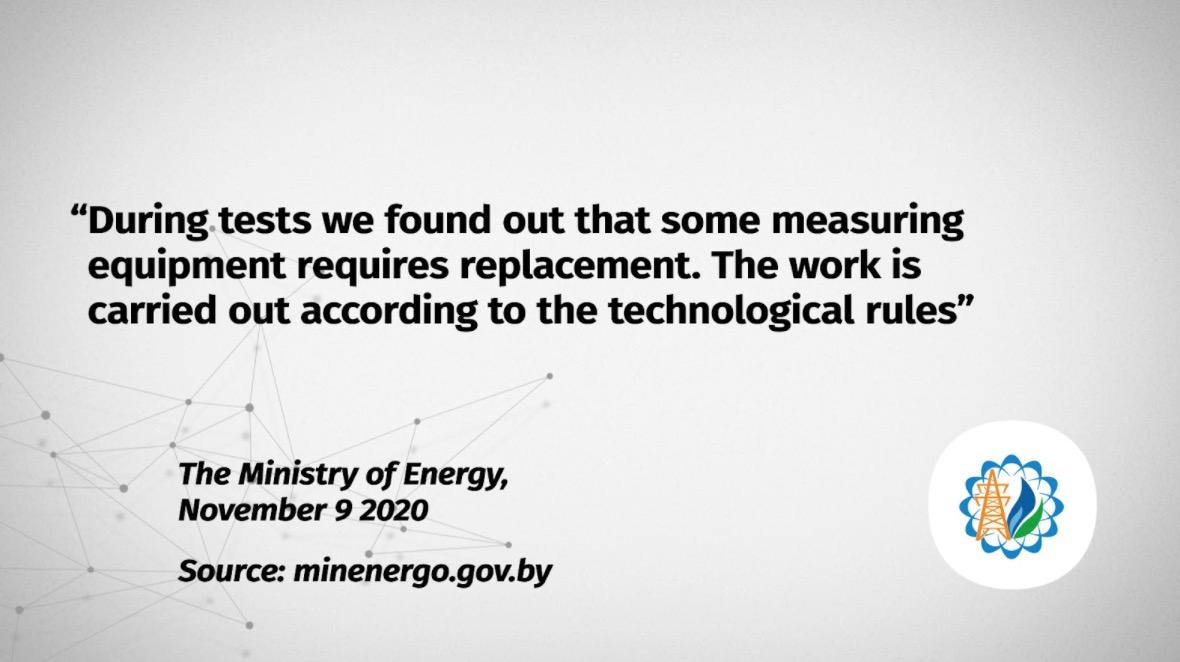 During the first year the plant was shut down at least 8 times. In total that amounted for 40% of its overall function time or 149 days out of 365. The longest halt of 3 months happened this summer. When the first power block was put into operation, officials merely explained that the diagnosis of the technological system was conducted but fell short to mention the reasons of the malfunction. 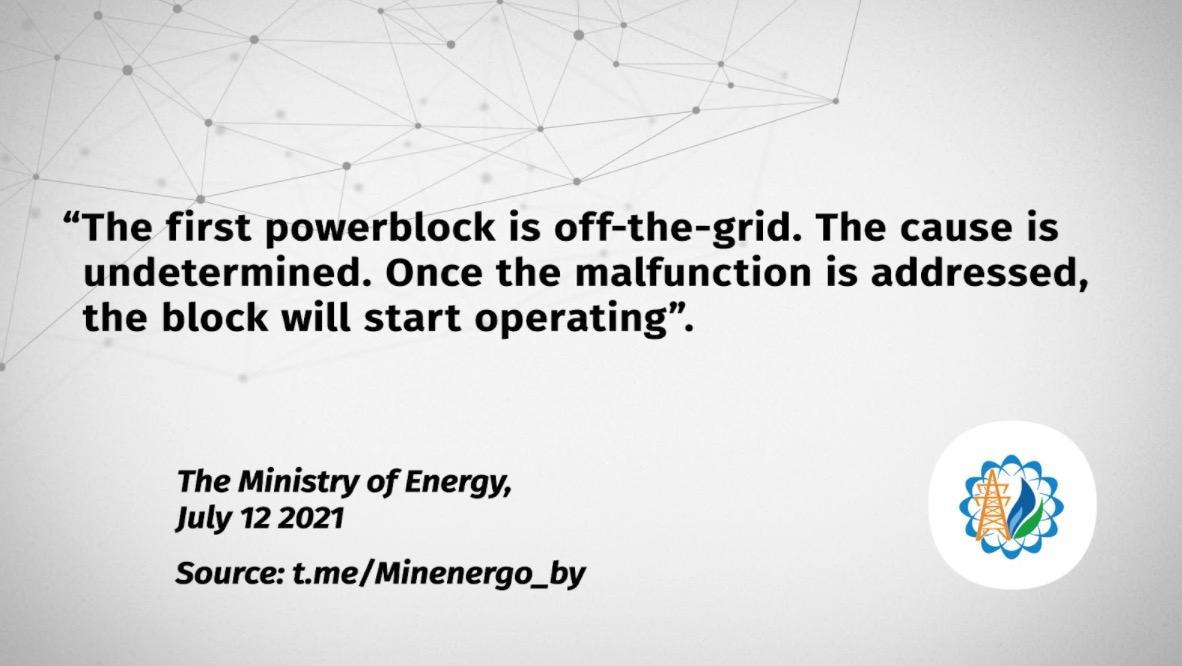 The Cyber Partisans leaked some reports, which state 18.000 of power block deficiencies, by October 2021 5.000 of which were not addressed. The list of deficiencies was updated in december and this time it contains about 3000 of defects. The problems are supposed to be addressed by the end of winter.

The deficiencies were registered by Gosstroynadzor, Gosatomnadzor, MES and other supervisory authorities. Experts point out that the document seems to be only a small part of a bigger report, in which only starting-up and adjustment works are covered and nothing about the reactor itself.

“Some deficiencies and inconsistencies that are identified appear in the same place. This demonstrates a lack of safety culture, low equipment and installation work quality. It’s obvious that they rushed to start the block neglecting the technical problems”.

According to some experts, there are minor defects such as incorrect documents or dud light bulbs. However, there’s a list of more serious problems. For instance, there were some problems with the fire-extinguishing system, station guidance system and measuring equipment. More than 60 comments made on a back-up diesel station. As our investigators previously found out, the construction and instalment of fire-extinguishing systems was performed by JSC “Stroitel”. The company carried out the highest qualification works falling short to have such.

The fire department registered shortcomings in the building of the reactor itself. Some of them are problems with the automatic instalment of the water fire-extinguishing system. 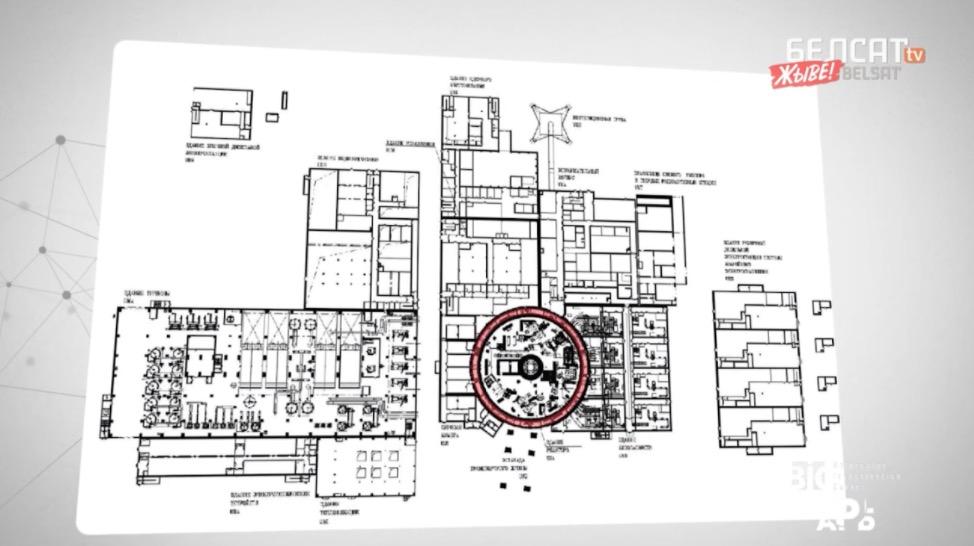 The SGD system has a direct bearing to the fire system, therefore malfunction of the SGD system is unacceptable. According to the reports that you showed, some components of the system are far from being installed but are not even procured. In any European country such inconsistency would prevent the regulatory authority from giving an operating licence, - said Evaldas Kimtis.

In the latest reports the International Atomic Energy Agency made some complaints about the work of Gosatomnadzor. The experts say that the regulatory authority is somewhat dependant, which coincides with the Resolution of the Eu Parliament on Belarus Nuclear Power Plant. 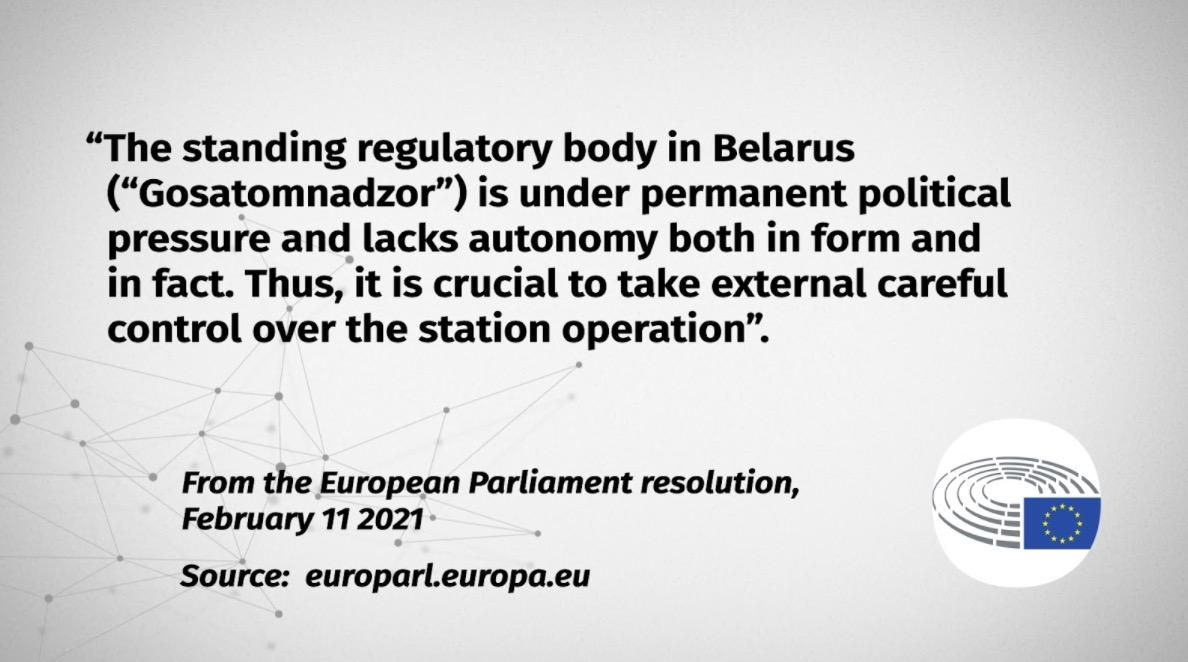 However, the experts also claim that the defects mentioned can’t cause a catastrophe. Anyway, the regular halts of the station lay a burden of extra costs, which results in failure of proper operation of the station and the repayment of the Russian multi billion loan. According to belarusian ecologist and economist Tatiana Novikava and an expert from “Ecodom” Pavel Garbunou, every day the station doesn’t operate costs $2,34 mln. It comes clear that the emergency stops at the power plant amounted to $348,7 mln.

But even if the plant works properly, the main question remains - what to do with overcapacity?

In the last 5 years Belarus has been producing approximately 40 bln kWh a year. The major part of the energy is used within the country, whereas the rest is being exported. However, according to International Analyst in Energy and Nuclear policy Mycle Schneider, when the power plant starts operating properly, the country will be supplied with extra 18 bln kWh, which will lead to overcapacity.

Belarus authorities meanwhile hope to solve the problem with overcapacity through export. 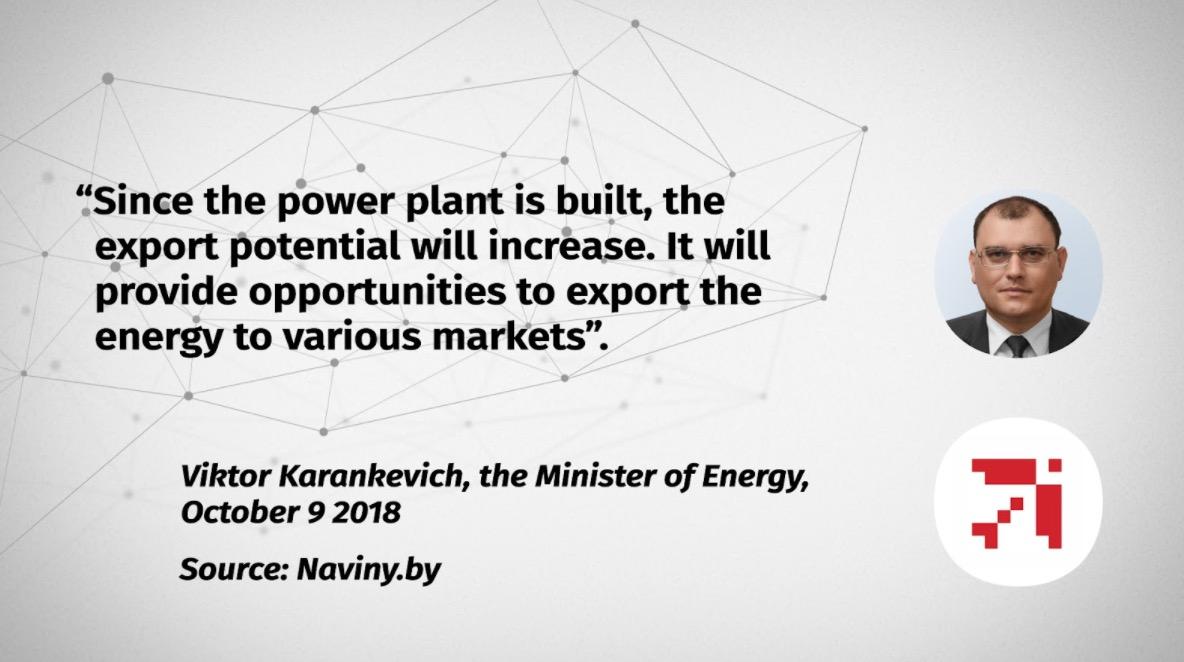 The main Belarus energy consumer in recent years was Lithuania. During the period between 2016 and 2020 the country bought 3,3 bln kWh for $170 mln. But this year Lithuania suspended the trade agreement. On November 3, 2020, right after the first power block started functioning at Astravets Power Plant, Lithuania blocked electricity supply from Belarus. Lithuania dreads the likelihood of a serious accident, which will inevitably involve it due to close proximity of the plant to its borders.

In February 2021 the Minister of Energy of Lithuania Dainius Kreivys confirmed the fact that about a quarter of exported energy comes to the country from Belarus through Latvia.

Anyway, this September the Lithuanian Governor approved the plan to reduce the bandwidth of power lines from Belarus to Lithuania so that energy from Astravets Power Plant couldn’t get into the Baltic market. Dainius Kreivys assured us that the electricity from Astravets hasn’t been exported ever since. By 2025 the Baltic countries will have fully switched from the Belarus energy ring to the power grid in Western Europe. Thus, the energy market in the Baltic region will be inaccessible for Belarus.

Ukraine was another country that was receiving energy supplies from belarus. From 2016 to 2020 the country got 1 bln kWh for $50 mln. But again, since January 2021 till September there was no energy transfer.

The thing is that Ukraine bans electricity export from Belarus to support their local energy producer, but also the situation stems from political reasons, - says analyst from EXPRO Dmitriy Sidorov. The last time Belarus energy was banned from July till October 2021, but due to high demand during winter the supply was resumed.

According to Dmitriy Sidorov, Ukraine doesn’t make a solid place for Belarus energy distribution. Ukraine requires its supply mostly during winter, while in summer it’s able to provide the energy for itself. By 2023 Ukraine as well is going to disconnect from the Belarus-Russian power grid.

As for Poland, then Belarus hasn’t supplied it with energy for a long time. There’s a power line at the border, but it doesn’t work as it doesn’t have current connection. As regards Russia, the country doesn’t plan to buy energy from Belarus until 2035.

If the energy doesn’t go for export, then the plant in Astravets has to increase the energy use within the country. Lukashenko assigned the government to stimulate the energy use among the Belarusians to heat houses and cook food.

Apart from the plan above, the authorities are planning to accelerate the energy demand by installing TPS and heating boilers, using electro buses and mobile cars and building properties with electric heating. In this case Belarus can use additional 11 bln kWh a year.

“Then we have to transform technologies, which requires extra resources. I think that it would cost a lot”, - says Alyaksandr Mihalevich, Academic Advisor of Institute of Energy.

Apart from financial strain, the plan has a risk of failure. The Belarus economy might not develop, then the electricity demand will decrease. Moreover, if neighbouring countries stop buying Belarus electricity, then its production in Belarus will reduce, while the cost will rise accordingly, thinks Mycle Schneider. In his opinion, common Belarusians will be the one to pay for it.

“Investing in a nuclear power plant requires an abundance of resources, then it’s obvious that you want it to operate all year round at its maximum to repay itself. Then, tax payers pay for it”, - says Schneider.

Belarus officials ensure that once the Nuclear Power Plant starts operating, the electricity cost will decrease. “Nowadays, the average cost of 1 kWh is about 4,2 cents. Then, at Astravets plant its cost is supposed to be 3,5 cents”, - thinks Mihail Mihadiuk, the Deputy Minister of Energy. 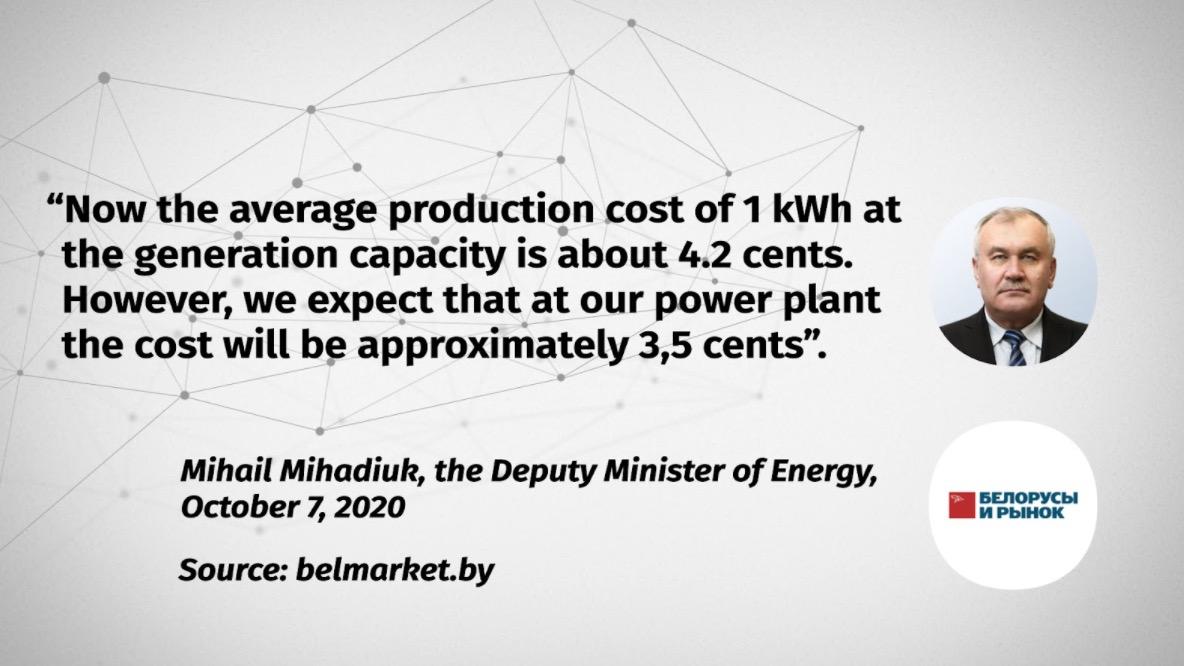 However, our state analysts came up with different numbers. The cost of 1 kWh would be 8,26 cents.

Another argument in favour of building the plant was the opportunity to decrease the dependability of Belarus from Russia in terms of gas supplies. But in 2021 it became clear that it’s far from being possible. Belarus consumes about 20 bln cubic metres of gas annually.  Belarus authorities claimed that right after the second block was put into operation (this is about to happen in 2022), gas consumption would reduce by 4,5 bln cubic metres. During the first shut-down of the first power block, the gas consumption turned out to be higher than anticipated value for export. So Belarus authorities decided to buy extra values in the Russian market, but were not able to do it due to the intergovernmental agreement on gas supplies, as reported by the Deputy Minister of Energy of Belarus Dzianis Maroz. As a result in September Belarus had to import about 300 mln of kWh of energy.