Fakes made of cardboard, Belarus' fight against illegal migration and why Europeans don’t trust their authorities?

05 November 2021
Fakes made of cardboard, Belarus' fight against illegal migration and why Europeans don’t trust their authorities?

A fifth package of sanctions is being prepared against Belarus

Subjects
A fifth package of sanctions is being prepared against Belarus. It will include those who are responsible for the illegal transfer of migrants to the EU through Belarus. But what do ordinary people living in the EU think about all these sanctions against Belarus?

"BELTA," citing the deputy Andrey Savinykh, reports that the majority does not support such an EU policy.

"I'm sure that the vast majority of EU citizens do not support the EU structures’ policy towards Belarus," said Andrey Savinykh.

In 2020, the market and sociological research company "Vilmorus" found out what Lithuanian citizens think about the reaction of their authorities to the events in Belarus.

Also, according to the survey, people with high income are more likely to advocate strict measures towards Lukashenka. The unemployed and low-income people have a worse opinion of the actions of the Lithuanian authorities.

Before the current migration crisis, official Minsk successfully stopped mass attempts of migrants to illegally break the EU through Belarus. Marat Markov, the head of the ONT TV channel, told about this in the "Editors' Club" program.

Markov did not provide any evidence. And here is what the official statistics say.

Last week, the Ministry of Health stated that the rate of increase in the incidence of COVID-19 is going down in Belarus. Meanwhile, at the time of this statement, his own statistics did not indicate anything of the kind.

Also, according to the Minister of Health, 32 thousand hospital beds in Belarus have been repurposed under COVID-19 - a third of the country's total bed fund. Only 2,500 of them are vacant. Pinevich said this on the "Belarus-1" TV channel on October 17.

And here are the COVID-19 incidence figures, published by the Ministry of Health on the same day, October 17. 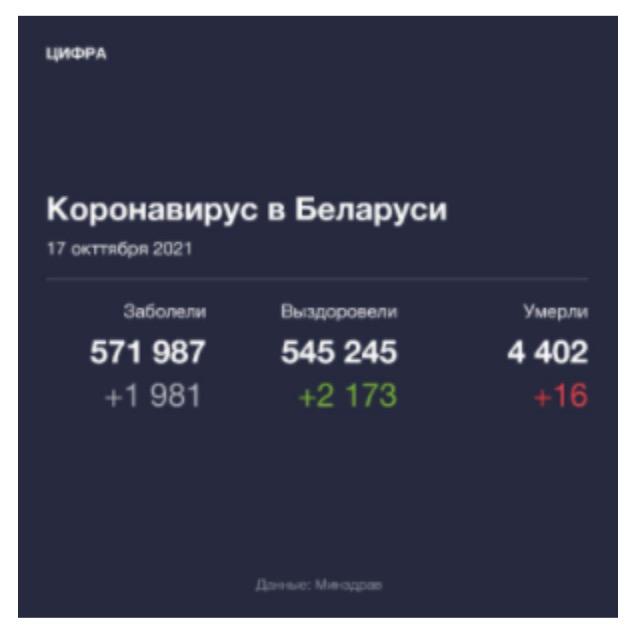 During the whole time, less than 572 thousand people in Belarus have fallen ill with COVID-19.

545.245 people recovered. And another 4.402 people died. If we subtract the number of all those who have recovered and died from the number of those who have fallen ill, it turns out that on October 17, only 22,340 people could have been sick with coronavirus. Most likely, some of them carry the disease in a mild or moderate degree of severity and are treated at home. But even if we were to hospitalize everyone with confirmed COVID-19, 30 thousand beds would not be filled.

A week later, at a meeting on the treatment of coronavirus, Alyaksandar Lukashenka said that only half of the beds under COVID-19 were occupied, and asked Pinevich not to overkeep people in hospitals.

In Belarus, according to Belstat, there were 80,000 beds in hospitals in 2019. It is interesting to note that the National Statistical committee did not publish information on how many beds were there in 2020. Assuming Pinevich was telling the truth, there are currently about 100 thousand beds.

From what Lukashenka said, it turns out that 40-50 thousand beds in hospitals were allocated for COVID-19. But according to the official information of the Ministry of Health, on October 25, 588.231 people fell ill with COVID-19 and 560.343 of them were discharged and recovered. Another 4.530 died. In total, 23.358 people were ill.

Who then occupies half of the beds in Belarus hospitals? And if it is indeed COVID-19 patients, then it turns out that the state statistics lie by underreporting the number of coronavirus cases. 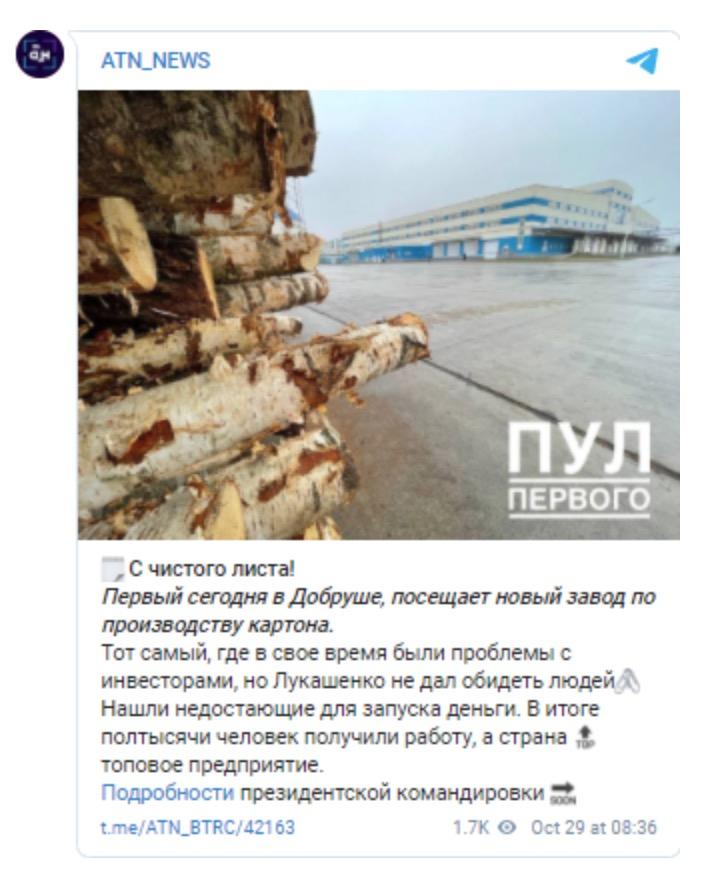 Indeed, this project has become a scandal. In fact, there was no investor; there was a Chinese lender, who gave a tied loan to a Belarusian state-owned enterprise for modernization on the condition that a Chinese company would perform the works. The Chinese company was supposed to complete the project by 2015, but did not do so by 2017. As a result, the partners argued and ceased cooperation on the project before its completion.

"To implement the project, the Chinese Development Bank has allocated a loan of $350 million. The general contractor was the Chinese company Xuan Yuan, which had no experience in implementing such large projects. Production commissioning was planned for 2015, but did not happen in time. In 2018, the investment contract with the Chinese company was terminated. In February 2020, during Lukashenka's visit to the facility, it was reported that it was planned to be launched only by the end of 2020 and would require $83 million in additional financing. Judging by the information from the Chinese contractors themselves, the main obstacle to the implementation of the project was their lack of experience in solving tasks of this scale, work experience in Belarus, unpreparedness to comply with Belarusian legislation and bureaucracy in administrative procedures", the Friedrich Ebert Foundation report says.

But where the Chinese failed, the Belarusian companies brought it to an end, says ATN. 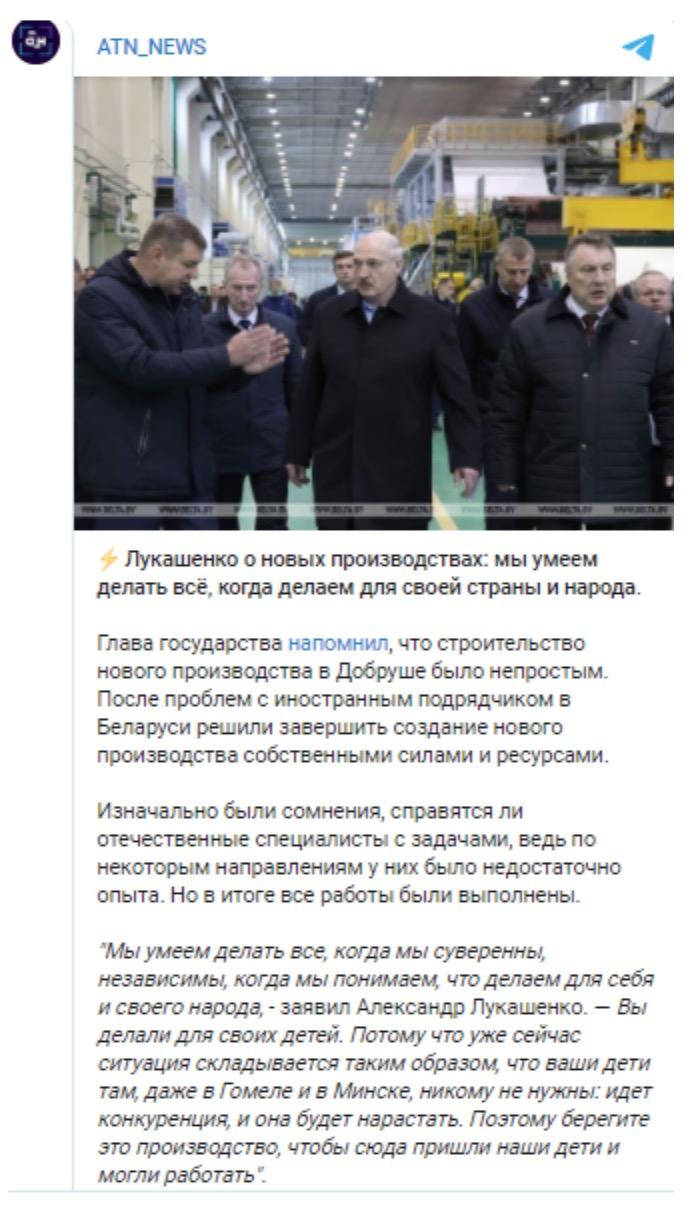 It is true about our own monetary resources. To complete the investment project, the state provided a $72,000,000,000 specific-purpose loan, and Belarusbank approved a $62,000,000,000 specific-purpose loan. It turns out that $134,000,000 was added to the original cost. But about their "own forces" the ATN got a little excited. Half of the allocated $72,000,000 was needed to pay for the services of the Austrian company that ran the cardboard-making machine. This was exactly because the Belarusians lack the necessary experience. Lukashenko was told about it directly by those responsible for launching the project back on February 4, 2020, during Lukashenka's first visit to the plant.

-       Can’t we debug the technology ourselves? You have plants, factories, specialists all around you. Why can't we run the machine and produce cardboard?

-       We can get cardboard, but we can't get coated and uncoated three-layer cardboard.

In the ATN report about Lukashenka's visit to the plant, correspondent Natalia Breus confidently stated that next year the plant will work at full capacity.

"They are now completing debugging of technological modes. They will reach full capacity next year”, - Breus said in her report.

And here's what Alyaksandar Kalyada, the General Director of the holding "Belarusian wallpapers", told Alyaksandar Lukashenka on the same day. This holding includes the Dobrush paper factory.

So the ATN lied that the launch would be over in a year, although, in fact, it is only planned in two. But that's not all. The host of ATN said that this is the first such plant in the CIS:

"That's because no such product has ever been produced in the CIS. We were the first”.

While the Dobrush plant has been under construction for 9 years, the Russians have already managed to launch a similar production. LLC "Kama cardboard" in Krasnokamsk produced its first coated cardboard in April 2021, while the Dobrush plant launched only on June 1. The Russians have been building their plant for 5 years. The cost of the project was about 29,000,000,000 Russian rubles (about $420,000,000). The Belarusian project was originally estimated at $510,000,000. But then with all the extra investment it went up by at least $134,000,000.