Aliaksandar Lukashenka often condemns real estate developers for making extreme gains. Yet, a new investigation by the Belarusian Investigative Center has revealed that Belarusian real estate prices are often inflated because Lukashenka himself distributes the best land to certain developers. As it turns out, partners at those firms also happen to be players at his own amateur hockey team, which helps them get benefits worth millions of dollars at the expense of the taxpayer

Subjects
Aliaksandar Lukashenka often condemns real estate developers for making extreme gains. Yet, a new investigation by the Belarusian Investigative Center has revealed that Belarusian real estate prices are often inflated because Lukashenka himself distributes the best land to certain developers. As it turns out, partners at those firms also happen to be players at his own amateur hockey team, which helps them get benefits worth millions of dollars at the expense of the taxpayer.

It has become common practice for businesses to gain access to the best land by building quasi-public sports facilities. As a rule, the so-called ‘social burden’ is carried by those investors who receive land on presidential orders or implement large projects. This is what happened when Yury Chizh, a formerly prominent businessman and Lukashenka’s friend (not so much anymore), decided to build the humongous residential complex ‘Dom u Troitskogo’ at the heart of Minsk. In exchange for the privilege, his company ‘Triple’ had to build a new indoor ice rink near the Students Village. Another one of Lukashenka’s business friends, Paval’s Tapuzidis, had to fund the construction of another ice rink at the outskirts of Minsk through his company 'Tabak-Invest’ for the right to build ‘Zamak’, a shopping centre.

At the end of 2021 a company ‘Skistroyinvest’ began the construction of a ski arena next to ‘Dreamland’, an amusement park next to the new Supreme Court building. In return, the company received three land plots to construct 115,000 square metres of high-density residential buildings at Vaupshasova, Zaharova and Zheleznodorozhnaya streets. Authorities maintain the arena’s cost is not borne by the public whatsoever - but is this really the case?

At the first glance the deal looks too good to be true as ‘Skistroyinvest’ pledged to invest $13 m in the construction of the arena with a provision to share any cost savings between the National Olympic Committee and the Minsk municipal budget. 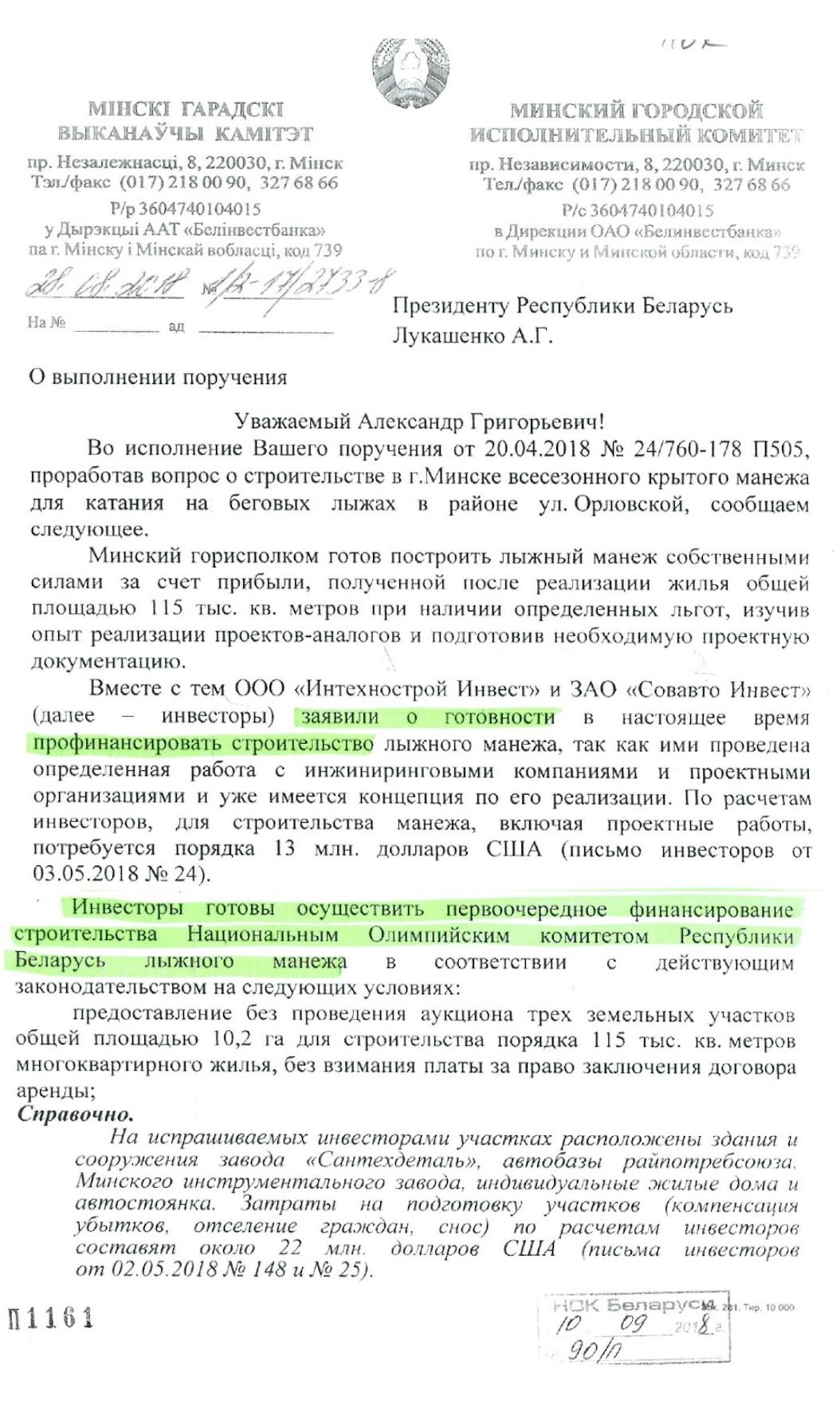 At the first glance the deal looks too good to be true as ‘Skistroyinvest’ pledged to invest $13 m in the construction of the arena with a provision to share any cost savings between the National Olympic Committee and the Minsk municipal budget. 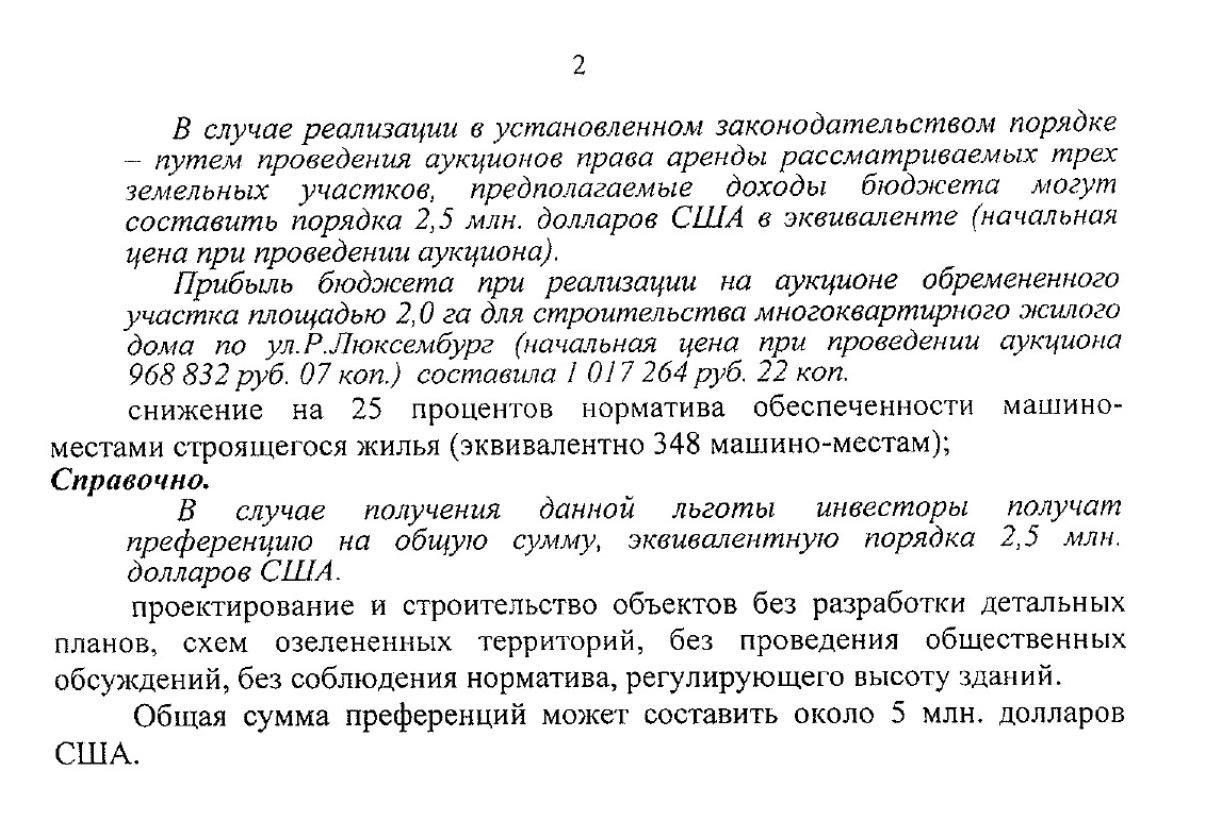 The three land plots that ‘Skistroyinvest’ received in return for building the arena had been freed from a “charge for the right to rent”. The Minsk city council estimated that if those plots were sold at an auction (as would normally be the case in Belarus), the city would gain $2.5 m - much less than the construction cost of the new arena that the city would get ‘for free’ from the business. To compensate the ‘Skistroyinvest’ a bit more, the Minsk City Council awarded them another exemption worth $2.5 million that allowed them to save on mandatory parking space provision and instead build more high rise apartments on the extra land. This makes $5 m in direct and indirect costs to the City Council in return for a $13 m arena - still looks like a good deal on paper. 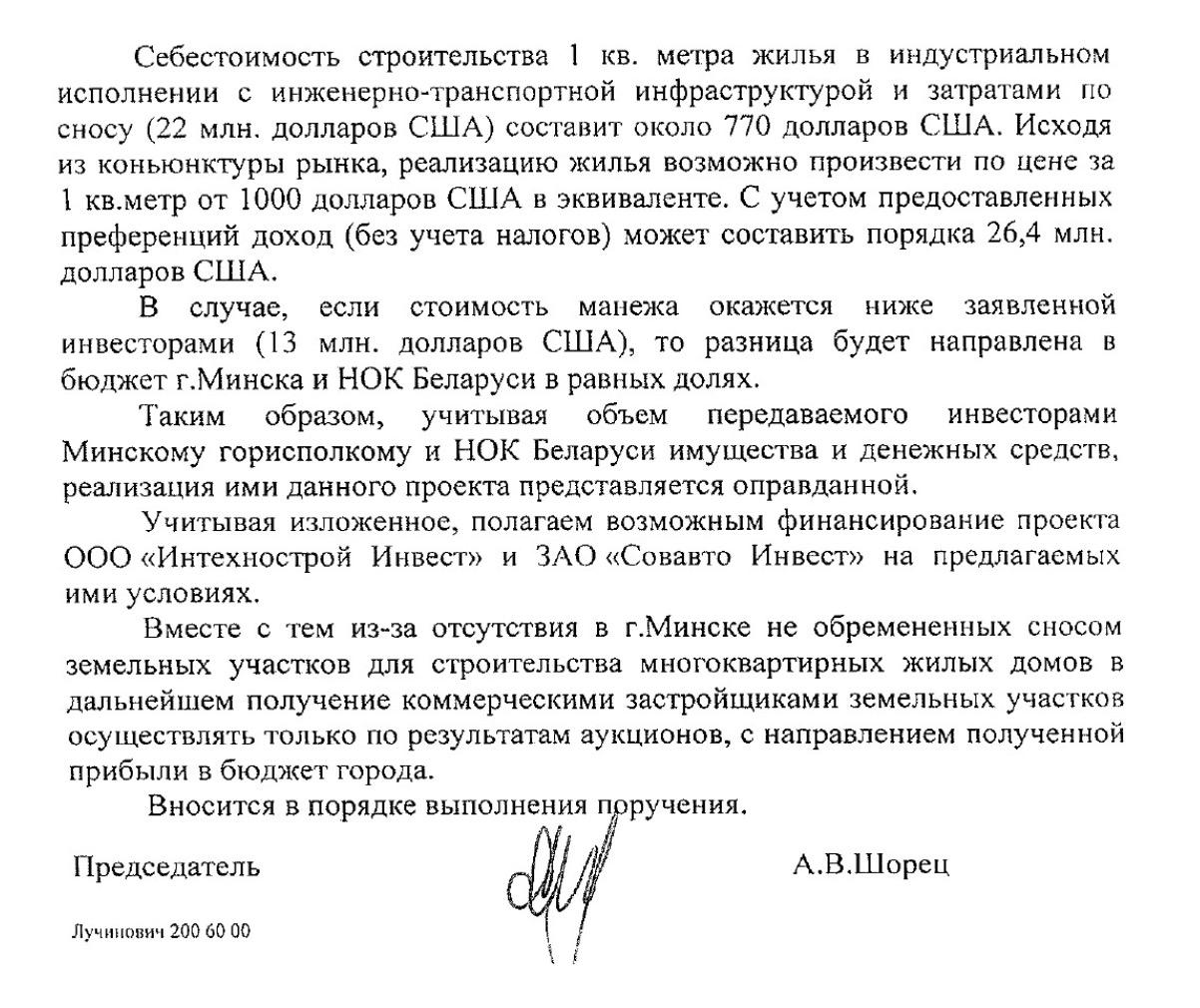 Belarusian Investigative Center, however, have uncovered the real cost of the lands awarded to Skistroyinvest. And it is, in fact, much higher than the $2.5 m claimed by the authorities. Estimation by two methods, cadastre and comparative market value, produces the same figure of $15m had the three plots been sold at an auction - the sum the City Council is now lacking in revenue. This means ‘Skistroyinvest’ will have more than covered the cost of the $13 m arena via land savings alone.

The free land is not the only perk, though. According to Minsk City Council documents, ‘Skistroyinvest’ would make up to $26.4 m (including all state benefits) if it sells every flat at the price of $1,000 per square metre. Currently the developer is selling apartments at a higher price of $1,100 per square metre. From past experience their price could increase by another $200 from the initial one. The average residential housing price in Minsk is $1,258 per square metre as of 20 March 2022, which means that in spite of all the benefits, ‘Skistroyinvest’(who market themselves as a provider of ‘affordable housing’) are actually selling the apartments at approximately the market price. 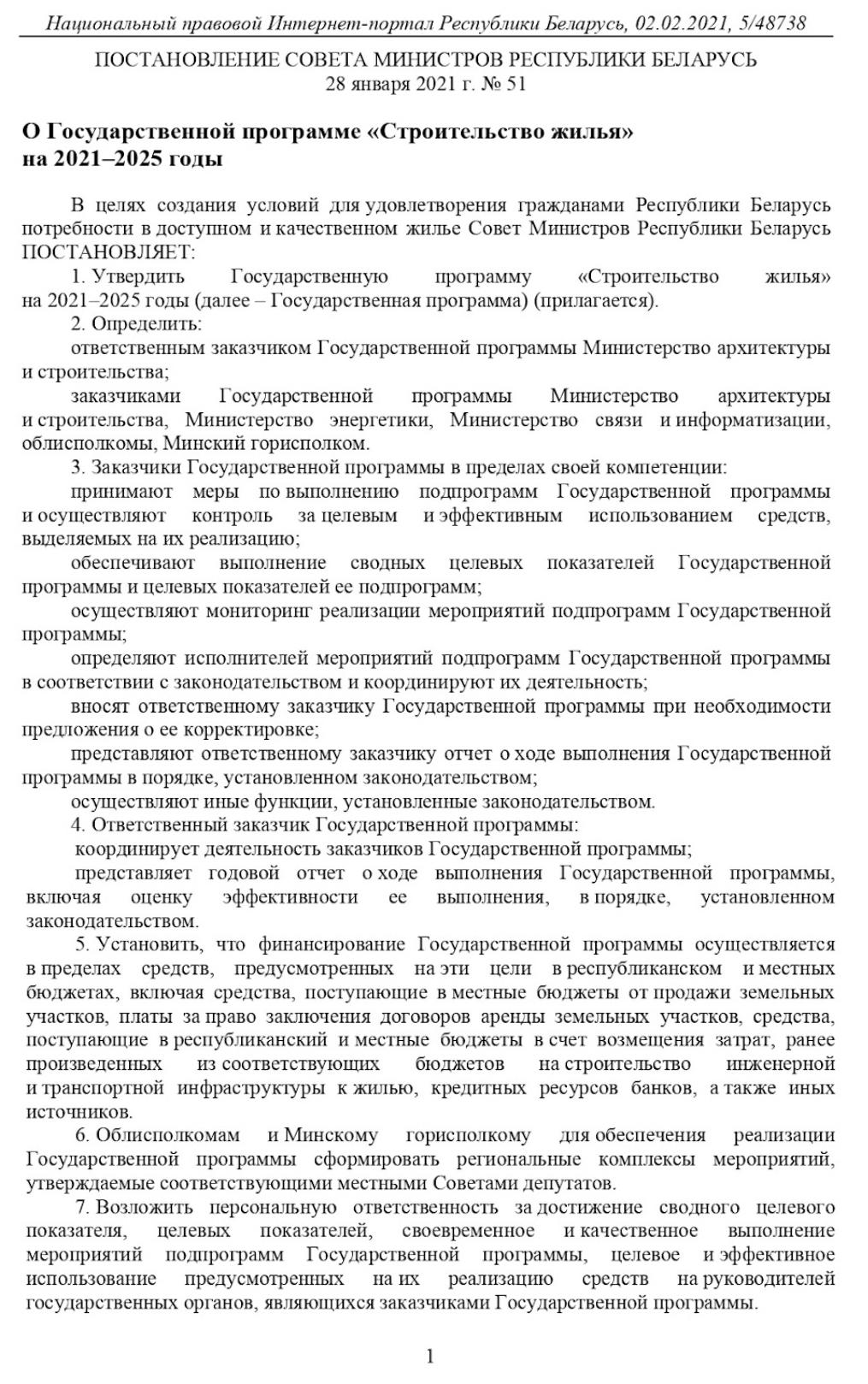 To sum up, not only will the state budget lose 15 million dollars in revenue, the Belarusians will also be burdened with the ice rink maintenance costs.

- Belarusians are, in fact, funding the construction of such [sports infrastructure] projects that are being sold to them as gifts. Now we have 44 indoor ice rinks throughout the country which turn no profit and are rather costly to maintain – says Anatol’ Kotau, a Belarusian Sports Solidarity Fund manager and an ex-government official.

Shytkousky ceased his professional sporting career over ten years ago before joining Lukashenka’s amateur hockey team and it was this amateur career that opened the doors to his successful business career. 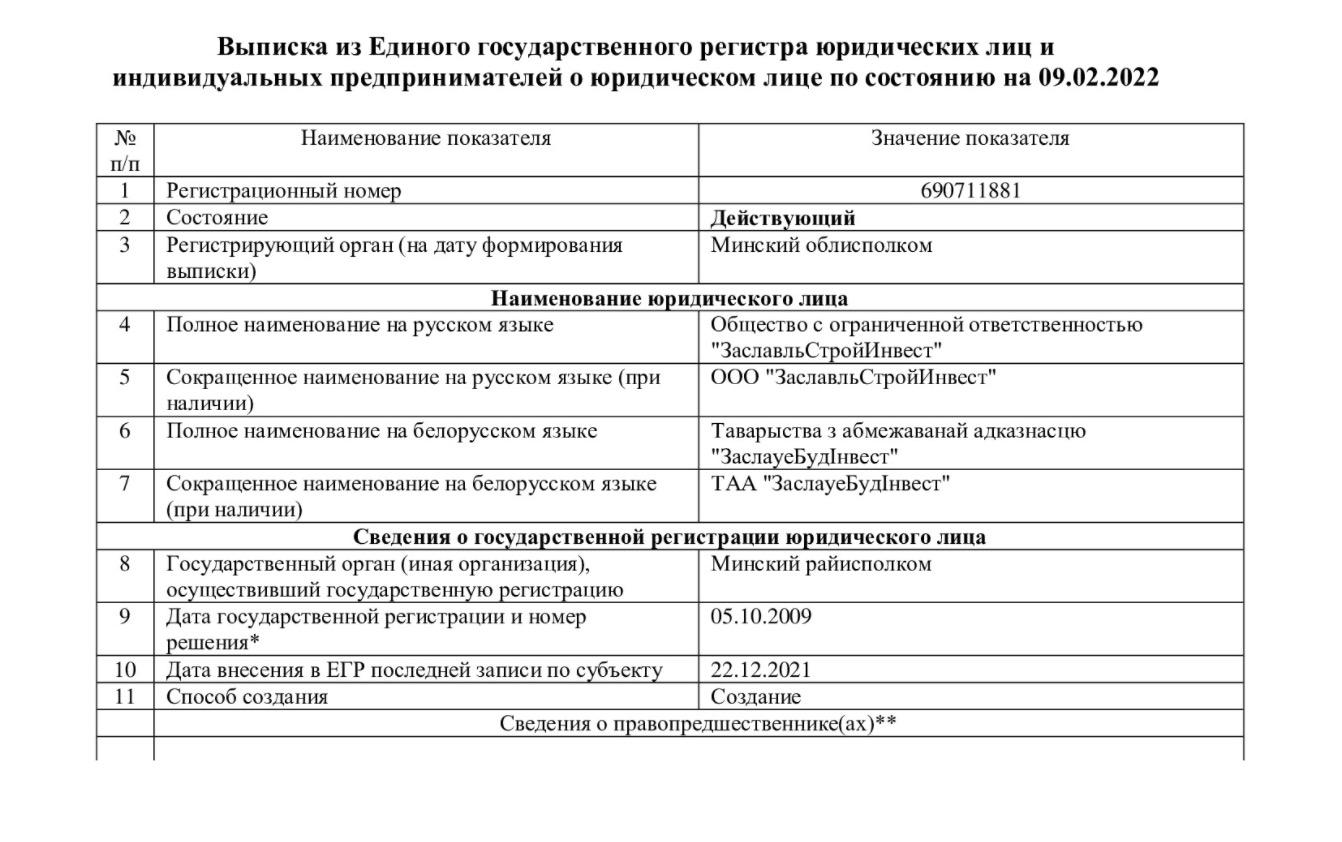 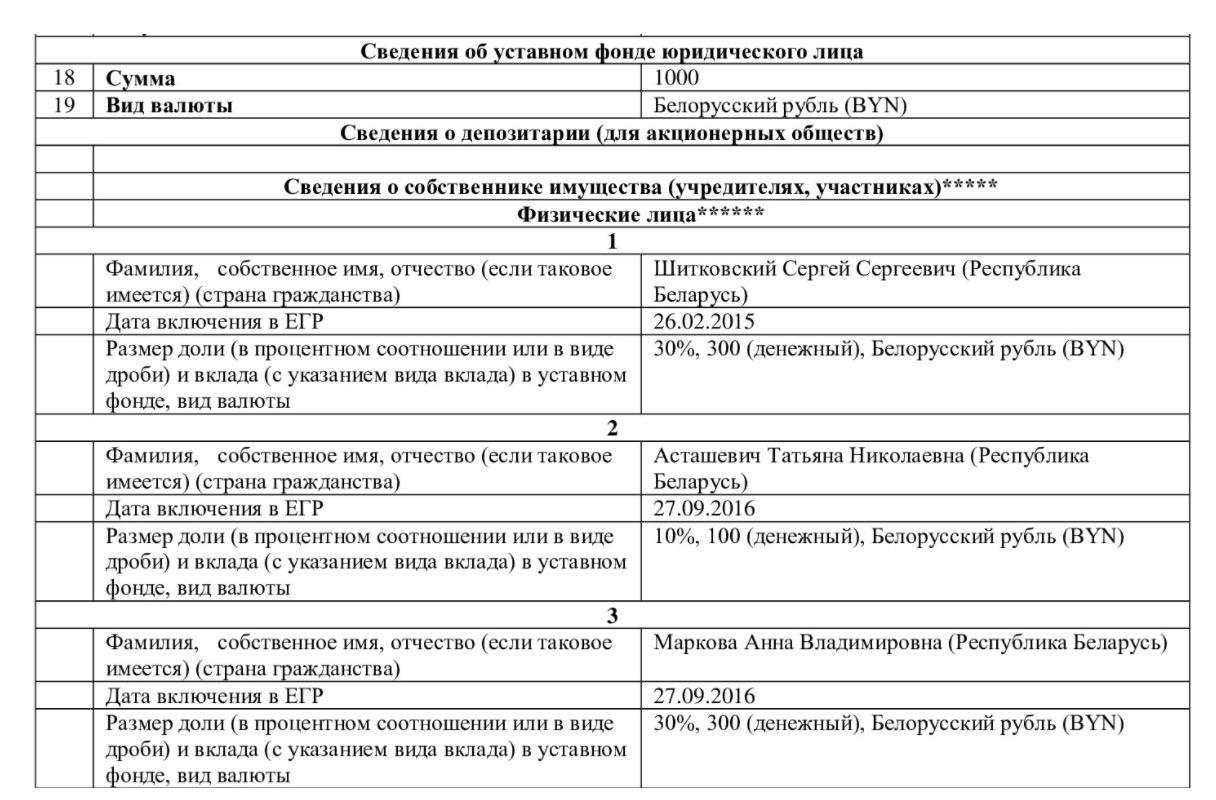 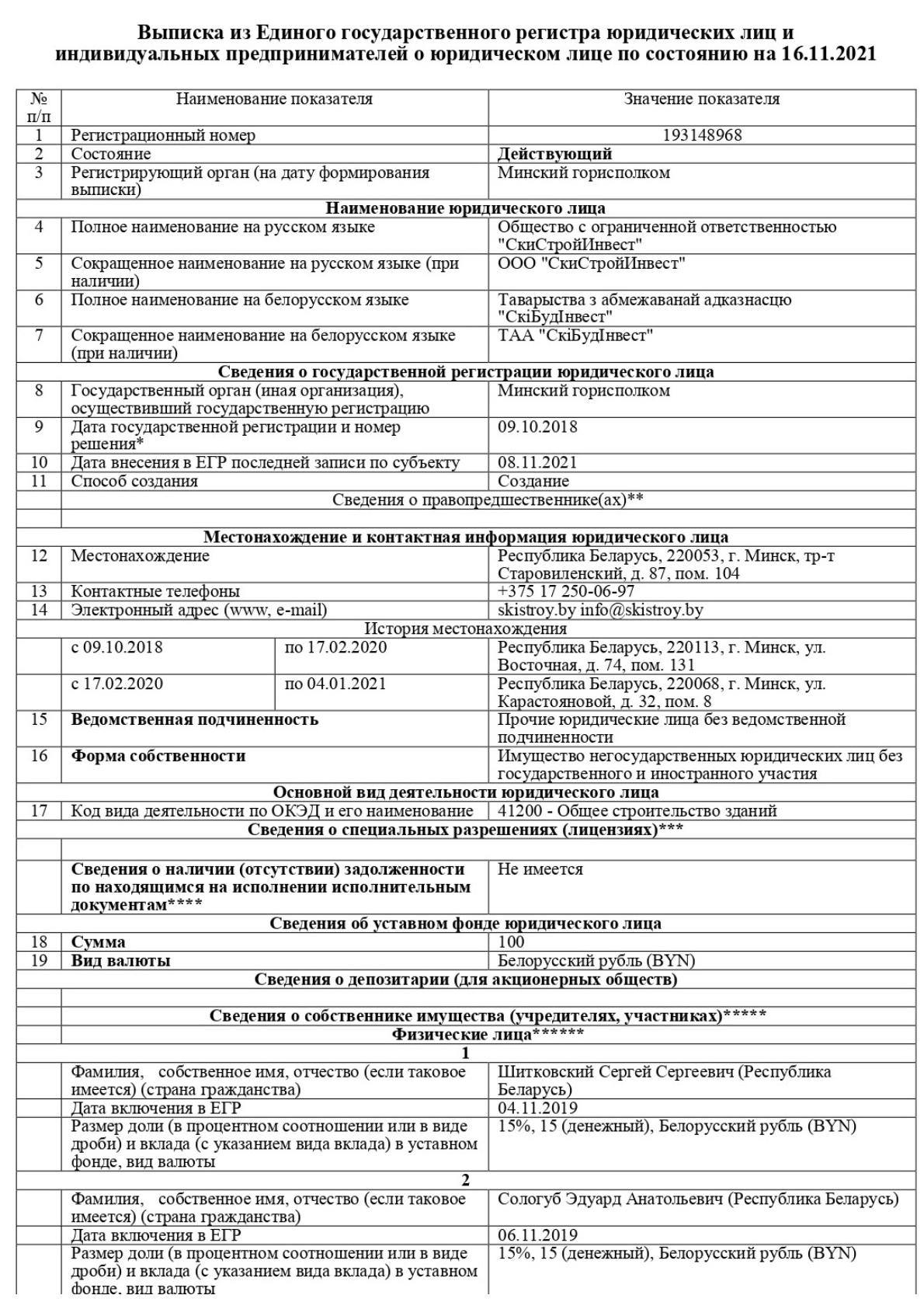 And yet Siarhei Shytkouski is not the first man whose involvement in Lukashenka’s hobby allowed him to make abnormal profits on real estate at the expense of the budget. In fact, Michas Hrabouski, Siarhei’s youngest son’s godfather, seized a road segment and part of a public access route to the Ptsich reservoir in 2014 and fenced it off with a seven-metre wall. The local authorities deemed him in breach of regulations and ordered to destroy the fence and pay a fine. Despite this, Lukashenka intervened and granted Michas the contested land.

Paval Biely is another professional hockey player who made money from gaining access to Lukashenka’s locker room. He never had any apparent success in the sport and ended his official career after a spine injury in 2007. By that time, however, Paval had become a regular presidential amateur hockey team player, Lukashenka’s permanent line mate and the team’s best sharpshooter. Soon Paval and his father’s company ‘Tapas’ became one of the biggest developers in Minsk delivering ‘Park City’, ‘Braslauski’, ‘Aquamarine’, ‘Megapolis’, ‘Monterrey’ residential projects as well as ‘Futuris’ and ‘Ajax’ business centres.

The ‘Olympic Park’ project was hit by a scandal as Lukashenka issued a personal decree to exempt Biely’s company from land payments (just like for Shytkouski in 2018), amend ‘Lebiadziny’ state park boundaries and permit the erection of a restaurant building on park land. The Belarusian Investigative Center estimated losses around tens of millions of dollars in lost revenue to the state. ‘Tapas’ ignored the ensuing public outrage and never ceased construction. The inaugural dinner event saw Belarus’ show business celebrities, sports people, as well as Aliaksandr Lukashenka himself.

At present, the restaurant is being managed by ‘Liebiadziny Park’, a unitary enterprise owned by the National Olympic Committee with Lukashenka’s eldest son Viktar at the helm. Sviatlana Kanashenka, Aliaksandr Lukashenka’s private medic, remains one of Paval Biely’s key business partners.

Real estate development has also become the trade of Dzmitry Baskau, the presidential hockey team’s senior coach. He is a shareholder in a range of commercial and residential developer companies and is a close associate of Michas Jarmashou, a man known for companies such as ‘Budmanalit’, ‘SU-3 Bielbud’ and ‘Zialionaja Havan’. 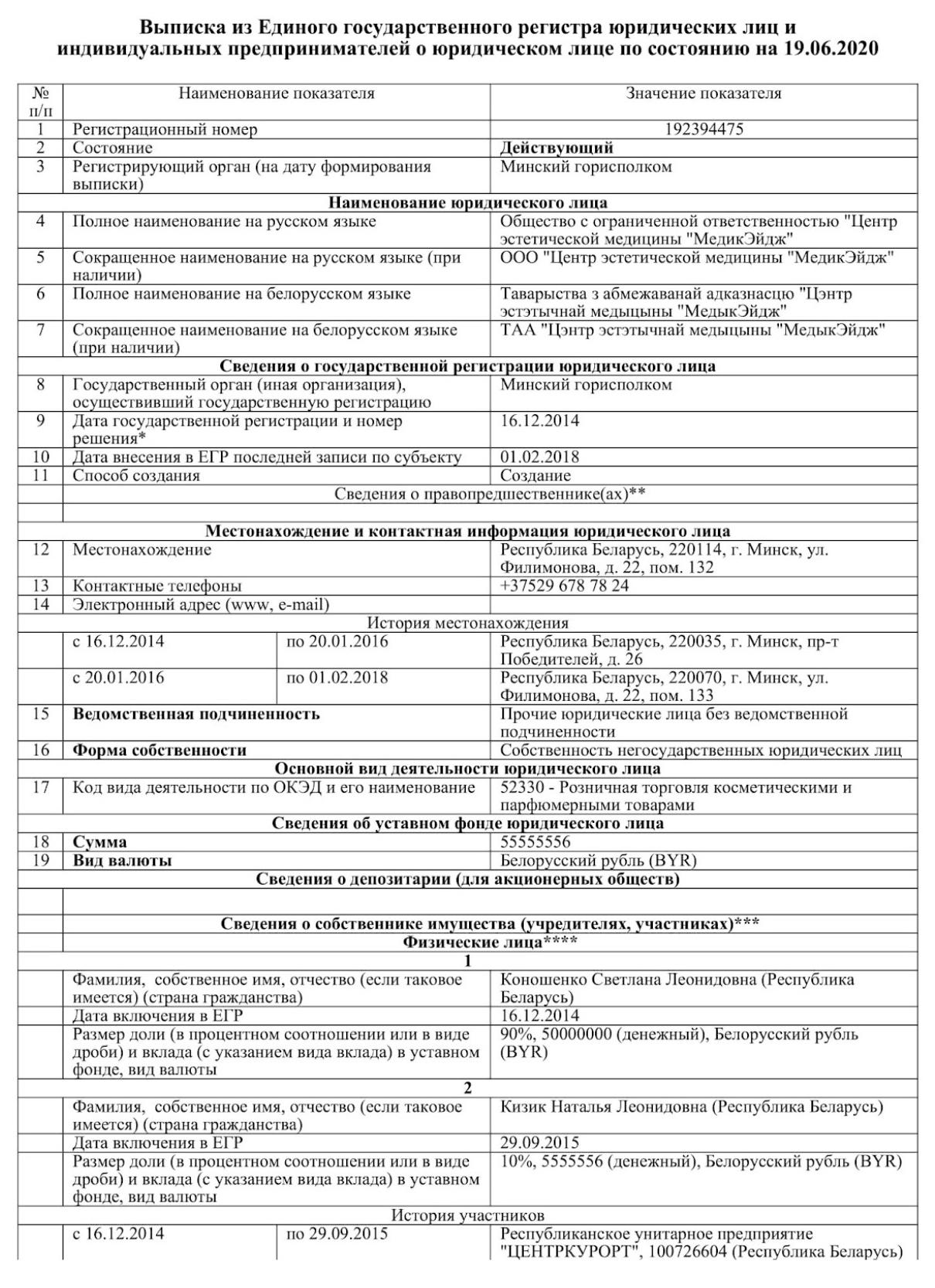 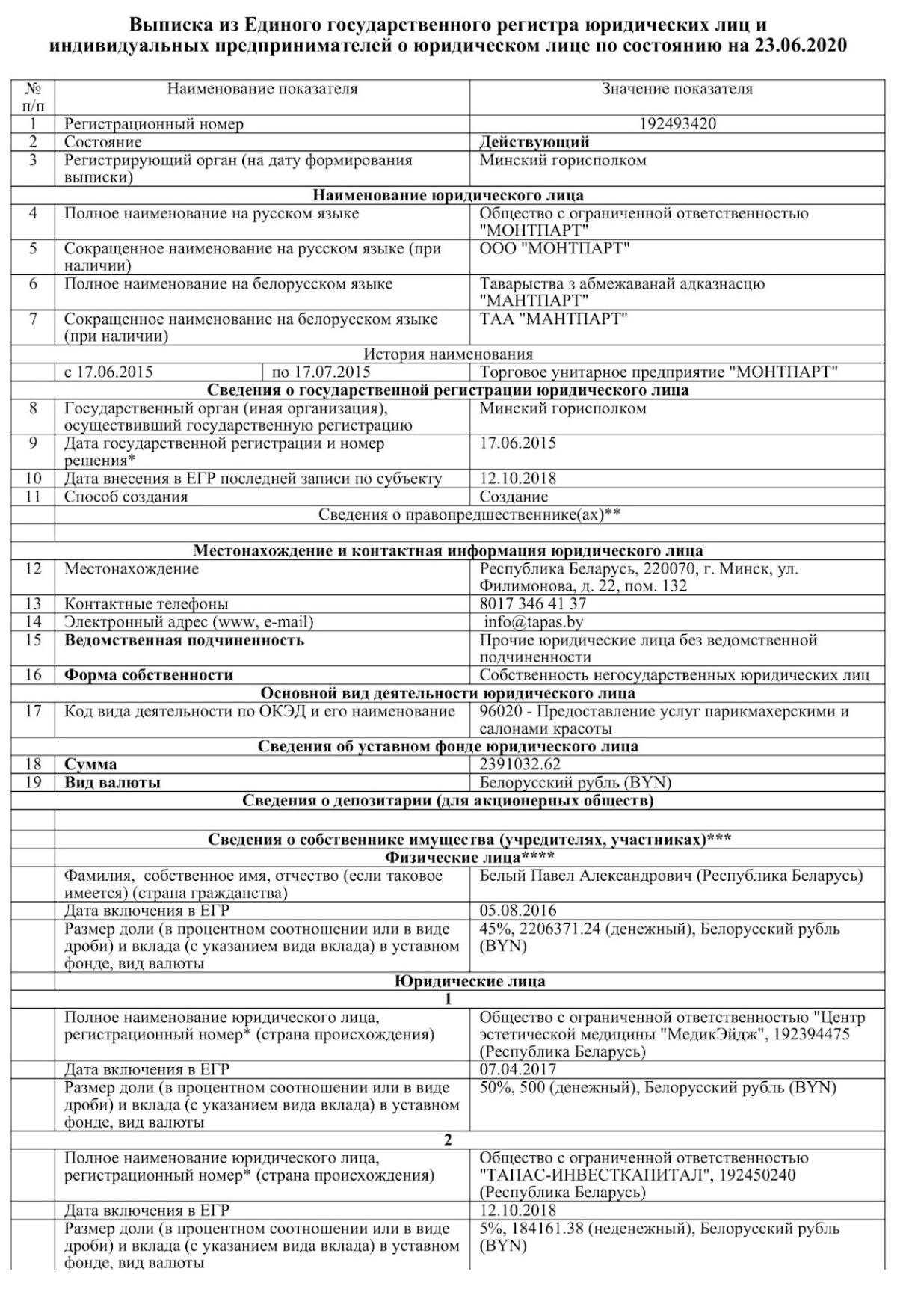 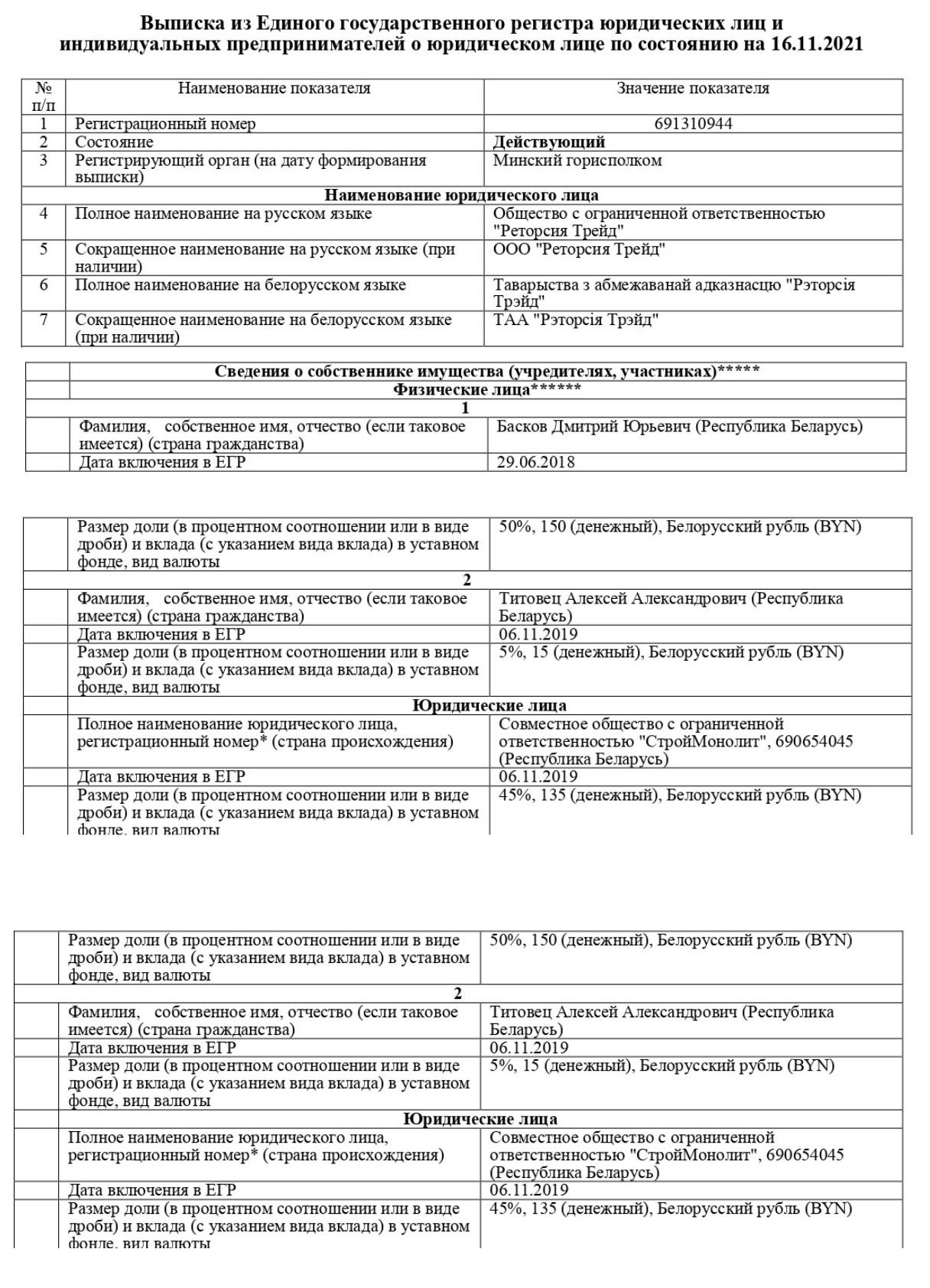